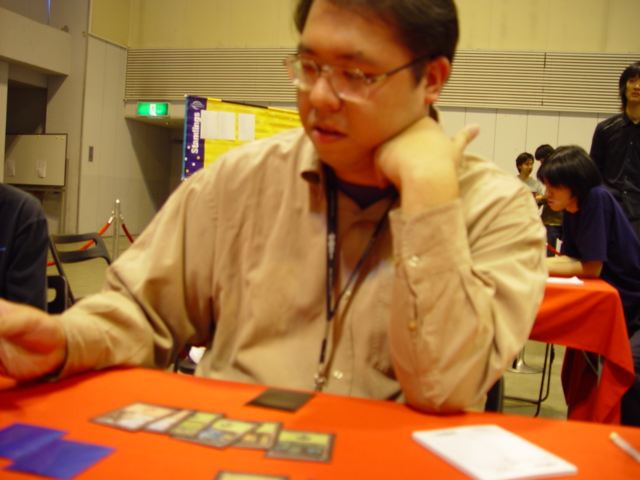 Ken'ichi Fujita has had his share of Master and Apprentice showdowns. After all, the big man has played mentor to many of the new crop of Japanese pros. This time, though, he faces his disciple from another arena: Sideboard Japan Coverage. Cub reporter Isamu Fujieda is taking a break from his regular position on the coverage side of things to return to being a player. Pride was on the line on both sides of the table.

Fujita started with with Birchlore Rangers, but had no friend for them to accelerate with. He played a Morph creature and then Symbiotic Elf while Fujieda managed only Daru Healer and Spined Basher. The Basher traded with what turned out to be a Snarling Undorak. Gluttonous Zombie forced Fujita to spend Symbiotic Elf and Crown of Suspicion to take it out, and then it seemed like Fujita's offense petered out. He made a morphed creature and passed it back.

Fujieda was just gearing up. He tapped out for Daru Lancer. Fujita tried to bluff his Serpentine Basilisk through, but Fujied blocked with his Lancer, stopping that in its tracks. Then he started to get busy with Gustcloak Harrier and Grassland Crusader. Cabal Archon convinced him to go for an alpha strike with Dirge of Dread. Fujita had Pinpoint Avalanche to shrink it somewhat, but with no forces of his own to speak of and six points of Brush of Death on the table, he figured things were lost. He drew, cycled a Dirge of his own, and conceded. 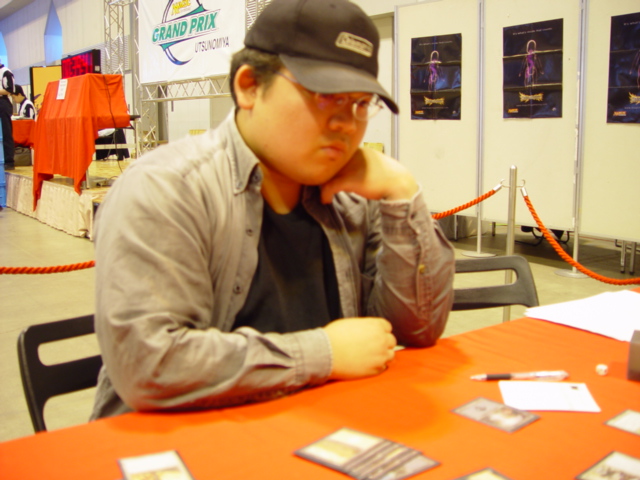 Fujieda had to take a mulligan for game two, earning a smile from Fujita. He brought the hammer down early with Sparksmith and a secret guy. Fujieda tried a surprise of his own. Fujita held back, playing coy. Fujieda made a Severed Legion to start the pain. Still Fujita didn't budge. Fujieda tried to make him pay with Commando Raid, but Fujita stopped that nonsense with Pinpoint Avalanche.

And that seemed to be the end of Fujieda's resistance. Swat took out his Daru Healer, and morphed Birchlore Rangers traded with a morphed Spined Basher. A Cycled Krosan Tusker got Fujita to seven mana, and he dropped Mythic Proportions on his Symbiotic Elf. Two hits, and they were on to game three.

Fujita didn't have a lot of action this game. His Wirewood Savage traded with what turned out to be Foothill Guide, then had to content himself with two Symbiotic Elves. Fujieda was meantime making Gluttonous Zombie, Cabal Archon and Gustcloak Harrier.

Fujita swung in with both his Elves. Fujieda let them through. Commando Raid took out the Zombie with help from Crown of Suspicion. Fujieda hit for four and made a Grassland Crusader. He wasn't willing to block the Symbiotesand let Fujita have extra attackers. Fujita added a morphed creature and a Nosy Goblin. Fujieda hit in the air and held his ground. The Goblin fell, but two morphs sprung up in its place. Fujieda was getting low, having fallen to ten. He made Sigil of the New Dawn and handed it over. His Sparksmith was no help.

Fujita's draw sent him into the think tank. It was Wave of Indifference, and he could use it to knock Fujieda to two, bouncing the Archon back to hand. Fujieda's resolve hardened. He spilled out Shepherd of Rot and Daru Cavalier, turning it back to the big man. Fujita unmorphed his Birchlore Rangers to get at more green mana, wanting to release his Serpentine Basilisks. He drew Sparksmith, and couldn't help but raise his eyebrows at the possibilities.

But it was tricky. Now Fujieda could let the Birchlore Rangers through, and if he was holding Dirge of Dread, the seven power of creatures he'd have left would be enough for the win. Fujita played it "safe", just sending in one of the hidden Basilisks. He forgot about the Cavalier's first strike. The Crusader pumped it up, and his hopes fell.

Now Fujieda was firing on all cylinders. He Harrier executed a Commando Raid on the Sparksmith, and the Cabal Archon returned to threaten the kill. Fujita drew Butcher Orgg too late. He couldn't break through for the kill, and Fujieda finished him on his turn.