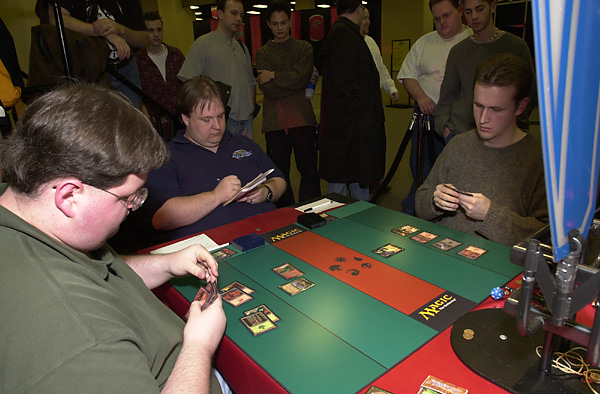 Kyle Rose summed up his deck, his chances in the match, and his overall play style in one sentence: "If I'm not in the red zone, then I'm losing." 'The red zone' refers to the new camera-friendly playmates that are being used in the feature match area and on ESPN2. The middle of the mat is colored red and that's where creature combat takes place, with players physically moving their creatures into the red zone when they want to attack or block. His quarter-final opponent in the Masters Series was Bob Maher, who advanced to the quarters of the last masters - in New York in September - and won the Pro Tour the last time we were all here in Chicago.

Maher drafted a black/red deck while sitting between Mike Bregoli and Alex Shvartsman. Maher and his teammate, Dave Williams, really put the squeeze on Mike Bregoli during the draft. Bregoli knew that both Williams and Maher prefer to draft blue, black, and either red or white. However, when Bregoli opened Stalking Assassin he felt he had to draft it anyway. But then Williams cut him off in pack 1 and Maher cut him off in pack 2. The result was that Maher wound up surrounded by green/white players and when he opened Void and got passed Plague Spitter during the last pack, he seemed very happy with his deck.

Rose opened a Keldon Necropolis and took it, which put him squarely in red. While drafting red creatures form the next few packs he noticed that there seemed to be good green cards left after Finkel was done with the packs so "The Big Ernham" went red/green. "That's my favorite kind of stuff," he explained while showing off his many 2-mana 2/2 creatures. He looked for removal, but wound up with very little. Instead his deck consists of 18 creatures and 2 Savage Offensives.

Early in game one it was actually Maher delivering the beats. He got in 8 points of damage before Rose stabilized with a pair of Ancient Kavus. When both players dropped Pouncing Kavus (with their kickers), the ground as thoroughly stalemated. Rose was hoping to draw a Savage Offensive, but instead it was Maher who broke the stalemate with first a flier - Phyrexian Slayer - and then Plague Spitter. "That's not good," summarized Rose. Smoldering Tar added insult to injury and Rose just scooped.

Rose finally got to enter the red zone for the first time in game 2. The players traded creatures a few times and then Maher seemed to stabilize with a Phyrexian Reaper. Maher played Plague Spitter on turn 6 and Rose knew his Viashino Grappler and Quirion Sentinel were both about to die. The usually speedy Rose thought for a long time about his next play and finally decided to summon Pouncing Kavu and attack with everyone. He lost his entire team, except for one lone Kavu Scout, but he managed to deal 11 points of damage, dropping Maher to 7. Rose was gambling that Maher wouldn't have many creatures left in his hand and that Rose might top-deck some more. Rose spent his next turn removing Maher's Shivan Zombie with Scorching lava and dropping Nomadic Elf. That forced Maher to leave his Phyrexian reaper back on D and when Rose drew and played Serpentine Kavu, he was able to give it haste and bring the entire team yet again. Maher did have the Scorching Lava he needed to survive the attack, but when Rose drew another of his beloved 2/2's on the next turn and Maher drew a land, Rose's gamble actually paid off and he evened the match at 1-1. To be fair, Maher drew 7 spells and 11 land over the course of that game, but the spells that Maher did draw looked like they would be enough and Rose deserves credit for finding the one scenario where he could actually win the game.

Game three was very depressing for Maher. He kept a perfectly reasonable opening hand that included two Swamps, a Plague Spitter, a Shivan Zombie, and three expensive cards. He didn't draw land #3 until turn 5 and still might have gotten back into the game if he had ever drawn the Mountain he needed to cast Void. But he didn't. After the match Rose admitted "I got a little lucky there, I'm not gonna lie." Rose and his army of little green men will take home a check for at least $10,000 and Rose now advances to the semi-finals where he'll take on the winner of the Ben Rubin/Dave Williams match.