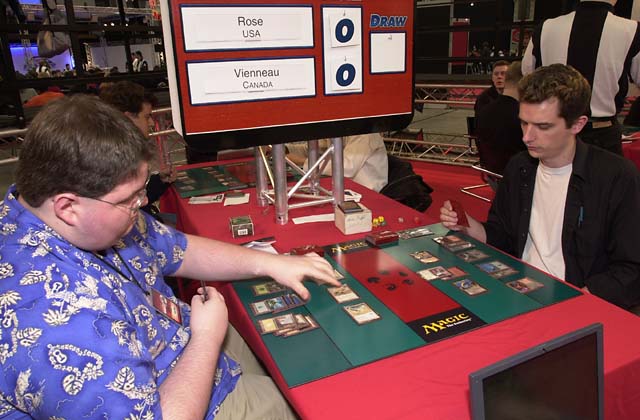 Kyle Rose has won more money through the Pro Tour than anyone not named "Jon Finkel" and he's the only other person over $100,000. Matt Vienneau has emerged from the pack of Pro Tour regulars recently and put up quite impressive results on the Grand Prix circuit. He seems to love Invasion Limited as he's won both a booster draft and a Rochester draft GP. Barcelona gave him an opportunity to prove himself on an international stage and when he sat down at his first draft table he saw Rose sitting on his left. They each split their first two matches ad then squared off in the Feature Match pit during round 3.

Vienneau drafted his usual colors: black, red, and blue. (Mostly black-blue, actually, he only wound up with two good red cards.) Rose wound up blue-white-green. Like good draft neighbors, they covered all five colors (and four friendly color pairs) between them and didn't overlap in any of the gold combinations. 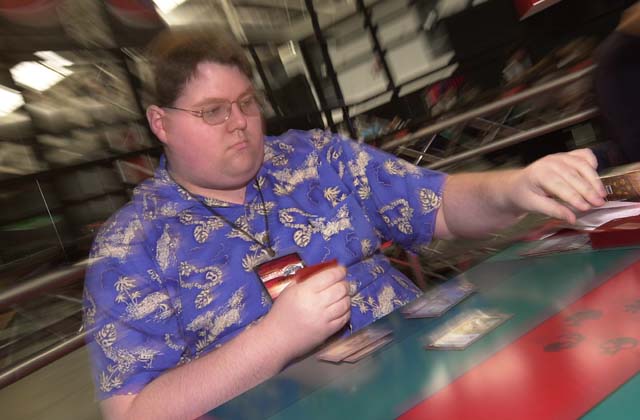 Game 1 was fairly lopsided. Rose Excluded Vienneau's first creature (a Tower Drake), Hobbled the second one (a Mire Kavu), and served up the beats with a pair of fliers (Aurora Griffin and Glimmering Angel) plus a Sunscape Apprentice. All Vienneau could say was "it sucks when I know all the cards you're going to beat me with."

Rose played his Aurora Griffin on turn 4 again in game 2. This time he enchanted it with Armadillo Cloak and Vienneau didn't have any answers. Vienneau tried to race with a 4/4 Marauding Knight, Volcano Imp, and Vodalian Zombie, but Rose was gaining 4 life per turn from the Cloak and he also had a Repulse to slow down the Knight. Vienneau played a 4/2 flying Tek and informed Rose of its stats when Rose picked it up to check. "As long as you don't have any Giant Growths he should be great." Rose chose not to attack with his Griffin on his next turn, but laid a Stormscape Apprentice instead. The apprentice could tap Tek and clear a pat for the big Griffin, however Vienneau drew his 6th land and played Nightscape Battlemage with the kicker, bouncing both the apprentice and the Cloaked flier. 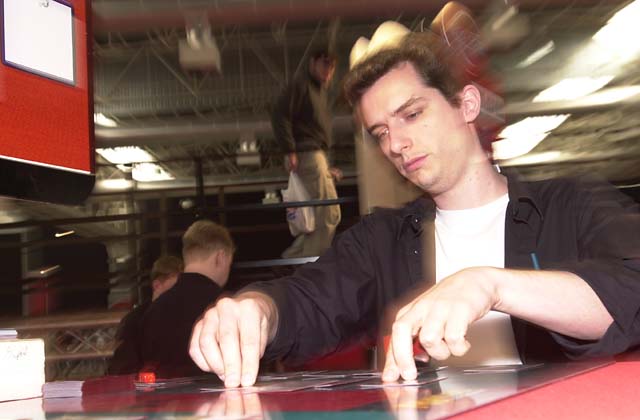 With his Cloak gone, Rose was forced to resort to "plan B" and quite a plan B it was: Treva. Vienneau decided to chump block Treva and crack back with his twelve power worth of creatures. Rose had the answer for that too though: Silver Drake bounced Honorable Scout, which allowed Rose to gain 8 life (going up to 28). Rose also replayed his blue tapper. Suddenly racing wasn't really an option. Vienneau tried to Soul Burn the tapper, but Rose had a Gaea's Might to save it. Then he tried to play Barrin's Spite, but Rose stopped that with Confound. Vienneau's Recover on Tower Drake did resolve, but that didn't deal with Treva.