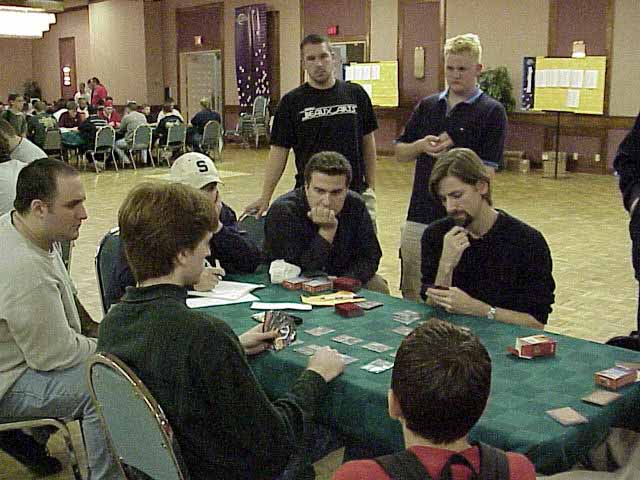 What year is this? If you answered 2000, you'd be right, but you would never know it from the two competitors that sat down across from each other for round three. Both of these players are Pro Tour veterans, although Mr. Place has been conspicuously absent from the professional Magic scene since showing up for his hometown Grand Prix in Kansas City, MO about a year and a half ago. At the team-format Pro Tour in New York City, Hacker was a member of Team B.I.G. who finished 7th. Before that, Hacker was also in danger of having to requalify for each Pro Tour because of low Pro Points. One might be tempted to say something like, "Ahh how the mighty have fallen." This statement may be a little harsh, but at one point these guys were two of the very best in the game. At any rate, the effort to get back into the swing of things is admirable, and though neither of these guys in on the 'top' of their game right now, a return to greatness is almost inevitable. 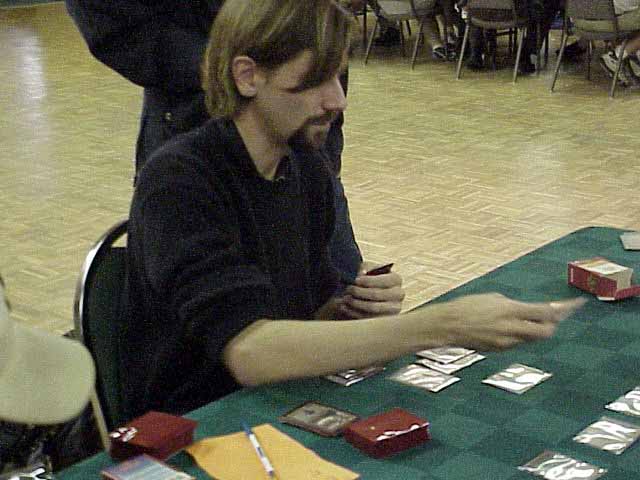 Game one saw Place win the die roll, and elect to draw. Deciding to let the opponent go first is an interesting decision, and one on which a lot of the top pros differ on. Probably the best way to gauge this is to determine how aggressive your deck really is, and decide whether to "play or draw" based on your deck. Anyway, both players started off with a few of each of their basic lands, with Hacker playing blue/black/white and Place playing black/blue/red, though he was missing Islands and Mountains for about 7 turns. Hacker started the assault with a Shoreline Raider, which did a few damage and then was the recipient of an Agonizing Demise, but by that time Hacker had followed up with a Phyrexian Infiltrator. Place played nothing but swamps for land until turn 5, at which point he dropped his first Island and cast Probe with kicker, discarding two (uncplayable at that point) red Kavu and making Hacker discard two lands. The two players had some minor battles over Place's turn 6 Vodalian Hypnotist which got Cursed Fleshed, and eventually Soul Burned when Place replayed it the next turn via Recover. Eventually Place stabilized at 8 life with a Duskwalker, and after some combat tricks by Hacker to trade his damage on the stack Infiltrator for the larger Duskwalker (kicked), Place finally Recoiled his own Duskwalker, discarding it, and leaving the board vacant, except for land. Place untapped and dropped the bomb. Yawgmoth's Agenda hit the table. Hacker tried in vain to play around it, Recoiling it one turn, and eventually just conceding at 21 life to a graveyard chock full of good stuff. 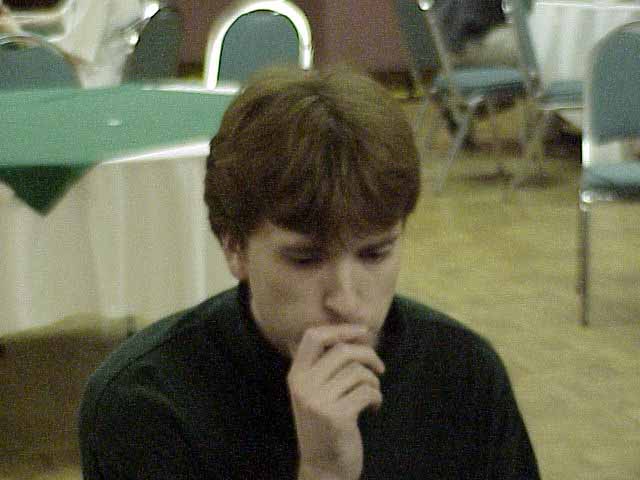 Before the first game, Hacker in his usual boisterous tone announced he was putting in 'the package' for game 2. This 'package' consisted of taking out black cards for green cards like Serpentine Kavu and Thornscape Apprentice. Unfortunately for Brian, game 2 never saw him draw a forest, and he was forced to discard on turn 4 after playing 3 Islands. Matt had an excellent draw this game, with all three colors of mana, and after playing a turn three Hooded Kavu, and a turn four Ancient Kavu, Matt was putting all sorts of pressure on. Brian managed to find a Plains and drop a Benalish Herald on turn 5, but Matt answered with the 6/5 Halam Djinn (actually 4/3 because of the red cards in play) and the hasted Djinn and bigger Kavu came over. The Herald blocked the Kavu, and the Djinn did 4, but the best part of this turn was Matt saying, after he played and attacked with the Djinn, "Oh S***!" Place had some problems doing math and apparently thought his Djinn was 3/2 (thus killable by the Herald) and not 4/3. At the end of the turn, Place said, "Someone tell me how big my creature is please!" Hacker had a good laugh, and said something to the effect of, "I can't believe I'm losing to a guy this bad." All was in good fun, but after an attempt to stabilize by Brian with the casting of Tek, Matt Recoiled both of Brian's creatures, and came over for eight more damage. Brian scooped 'em up at this point and acknowledged the return of one of the greatest players from Magic's past. 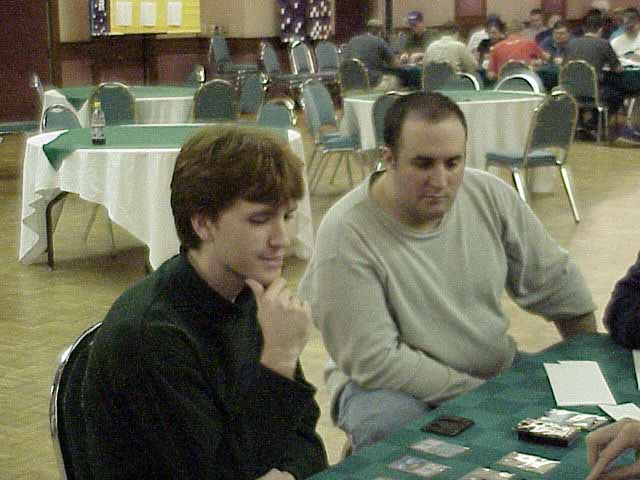