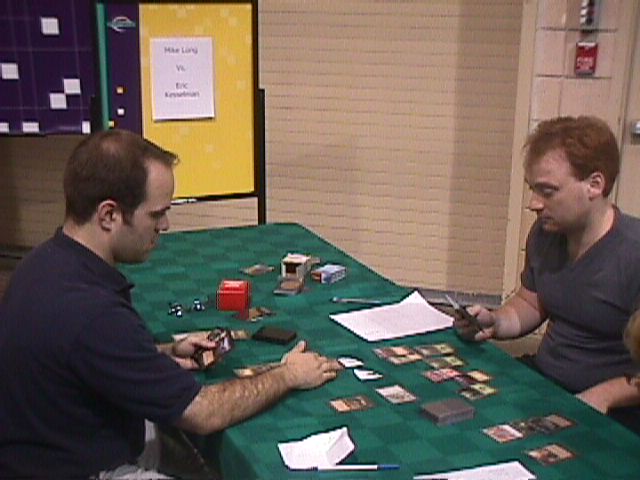 Mike Long vs. Eric KesselmanMike Long met Eric Kesselman in the third round of GP Atlanta. Both players were 2-0. It was Kesselman's first round of the tournament since he had two byes. Long had to play in round two.

Mike Long is a well-known former Pro Tour champion with many past top eights. He has lately fallen out of the spotlight after falling off the Pro Tour. Long is known for being the original bad boy of magic. He seems to have concentrated more on his card business in Virginia lately than on competitive Magic. 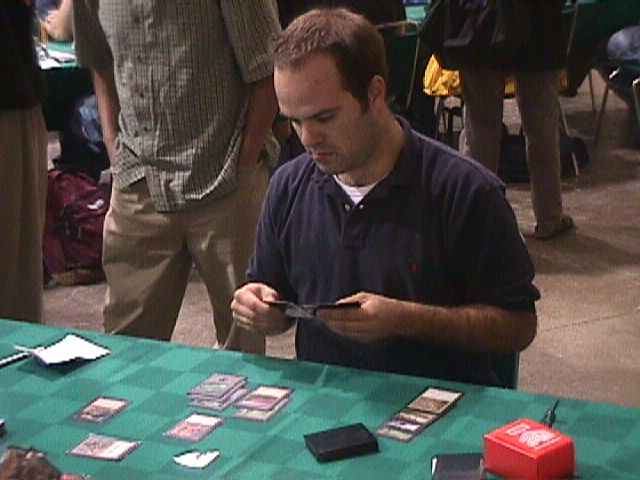 Mike LongEric Kesselman is a Pro Tour regular who has still not broken into the top 8. He is considered one of the better New York players at Neutral Ground. Kesselman is a popular choice for money draft teams, a good sign of his "limited skills".

Kesselman won the flip and chose to draw. Long had a strong start with a turn two Patrol Hound followed by a turn three Patchwork Gnomes. Kesselman proved to have very potent cards in his deck to stop the beats. He played a turn two Hallowed Healer and a turn three Resilient Wanderer. This shut down Long's offense. When Kesselman swung with the Wanderer turn five, Long smelled trouble and kept his team off the attack. Sure enough, Kesselman played a Beast Attack at the end of Long's turn. This powerful card proved too much for Long to deal with, and with such increased board advantage from the second 4/4 token, Kesselman quickly went on the offense. Long took a desperation shot by discarding several cards to his patchwork gnomes to gain threshold and then activating a Infected Vermin for three damage. This took care of the beasts, but Kesselman's hand still had many weapons including a Chainflinger and a Leaf Dancer. Long, lacking any nonland permanents conceded. 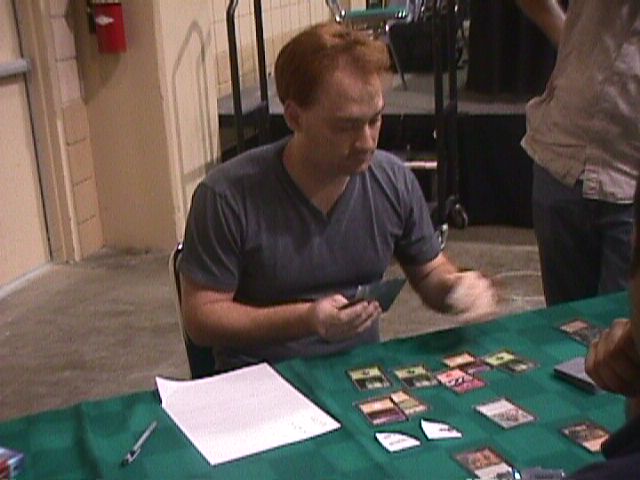 Eric KesselmanGame two, Long chose to draw first. Kesselman played a turn two Patrol Hound. Long played a Patchwork Gnomes on his third turn and the two began trading the less useful cards in their hands by discarding to the two creature's special abilities. Long was doubly mana screwed drawing only three swamps for the first five turns of the game. His board was not hopeless thanks to a second Patchwork Gnome. Kesselman played a fourth turn Springing Tiger and gained card advantage the next couple turns from a Refresh and a Shelter against the manascrewed Long. Long tried to hold on with a Rotting Giant and a Gravedigger, but a Muscle Burst gave Kesselman the added damage he needed to put Long away.