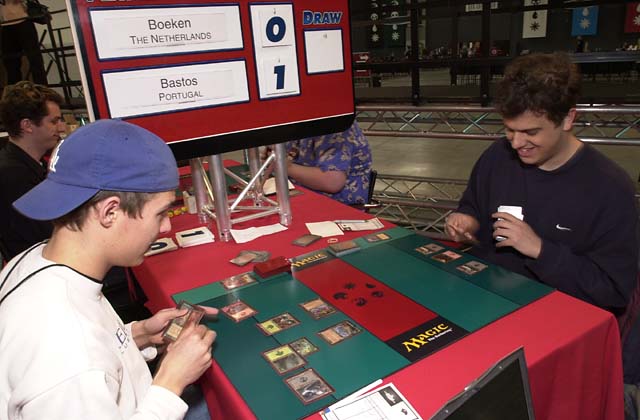 Noah Boeken, the reigning European Champion and member of the team that dominated the last qualifying season's Grand Prix (also Invasion Limited), squared off against Frederico Bastos, Portugal's National Champion and Top 8 finisher at Pro Tour Tokyo, in what was surely a match to watch in this third round. In the mind-boggling Feature Match pit, under the watchful eyes of a few spectators, they were both trying to bounce back from a 1-1 start on their way to a good finish in this first draft pod.

After winning the dice roll, Noah chose to draw first and took a mulligan. Despite the pressure of both the Feature Match and the start of the Pro Tour, both players showed good spirit and chatted about their draft table and their previous rounds. Frederico opened with a Shivan Zombie sending a clear signal that Noah was in for a fast race.

Keeping his promise he then took advantage of Boeken's mana screw (still limited to only two mountains) to play a second Shivan Zombie, a Cinder Shade and a Nightscape Apprentice. Noah's first creature was a small Quirion Explorer that stood aside while another big swing came in. Bastos then played a Power Armor effectively putting Noah on a two-turn clock.

The Dutchman took a long time to consider all his options during the next turn and was very hard-pressed to find a suitable solution. He finally decided to lose two lands to bury a Shivan Zombie and the Cinder Shade under a Magma Burst before the Portuguese could untap and protect them with his Armor. The next painful swing brought the Dutch down to three and his next draw didn't give him any miracle solution so he quietly conceded. 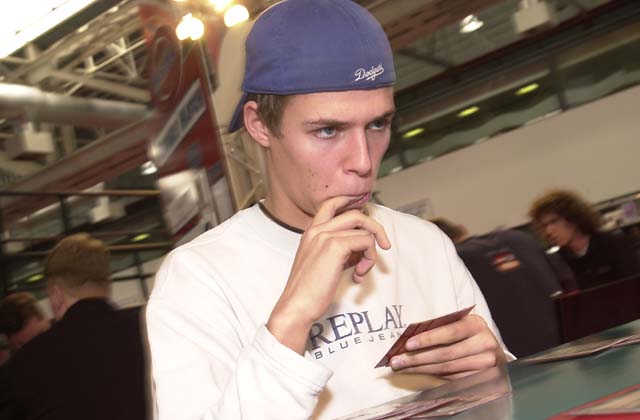 They both shuffled in a concentrated silence after some minor sideboarding. The first game was now a mana fluke in the past putting Noah one game behind but giving both players minimum information about their opponents' decks.

Noah came out to play this time with a Quirion Sentinel has his first creature and then Zapping Bastos's Apprentice out of the way. A second Sentinel came in to capitalize on Frederico's lack of early drops in this second game. To rub even more salt into Bastos's wounds Noah then dropped a big bomb: the token spitting, Josh Bennett lookalike, Nemata, Grove Guardian (drawn by one of the artists present on site, John Avon).

The next turn, the three Green creatures attacked Bastos and his newly played blocker: a kicked Pouncing Kavu. The Kavu chump blocked Nemata after some comments from Noah regarding Bastos's life totals. Even after a Plague Spores killed the Nemata, the two Quirion Sentinels and two Nemata-spawn tokens paved the way to a death by Magma Burst.

With a lot of time still on the clock, they took one minute to catch their breath and shuffled for the third game. Bastos went back to his first game speed with a second turn Shivan Zombie and Noah was right behind him with a second turn Thonscape Familiar. The Kavu nation made an appearance with a Recluse on the Portuguese side and an Ancient Kavu on Noah's side. 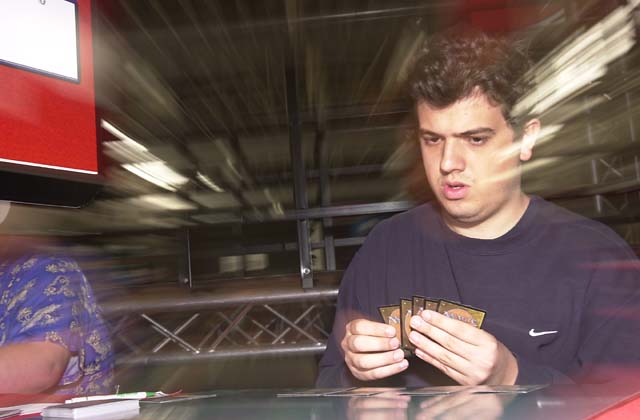 Frederico used a Magma Burst to wipe away Boeken's creatures and swing in. Noah then had to slow down a bit and could only play a Fertile Ground and a Quirion Explorer and sink into deep thought for a couple of turns. Bastos' Burst and broken his army and a Volcano Imp on his next turn certainly didn't help at all. With both players holding, and drawing, nothing but land Noah conceded in the face of Frederico's three creatures and his very low life total.

In the whole game both players drew only four spells each and Bastos' Burst decided the game. At the end they both went through their decks comparing the cards they could have drawn in this last mana-flooded game and shared good luck wishes . It was a weird, and extremelly fast, round decided by mana problems and Magma Burst.