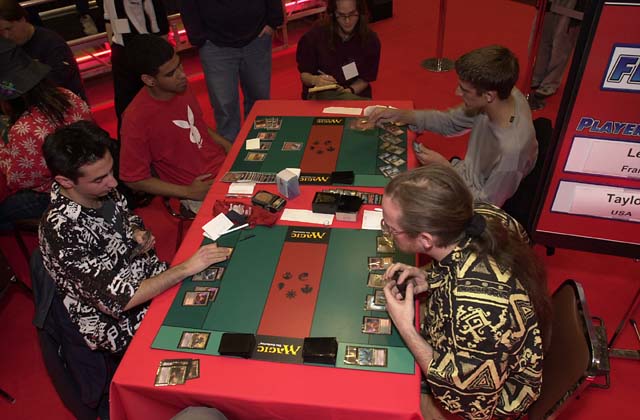 Raphael is playing a standard red/black deck, with Terminate in the main deck. Eric is playing a Blue/Black/Red deck with the red splashed for Crosis and Void. The advantage in this matchup might go Eric, because Raphael has dead cards against Eric, namely the Flametongue Kavus and Terminates.

Eric chose to play game two. He mulliganed his first hand. After looking at his second hand, he sits and thought for a minute. "Not looking good over here" commented Eric before thinking for another minute and taking his second mulligan. Raphael mulliganed a hand of 2 mountains 2 Crypt Angels, a Flametongue Kavu and two Ghitu Fires. Both players only play land for the first three turns. Turn 4 Raphael played an Urborg Volcano instead of playing a Blasting Specter. Eric played a Lobotomy on his turn seeing a Blazing Specter, Void, Ghitu Fire, and three land. Eric took the Blazing Specter. Raphael Voided for three, forcing Eric to discard a Undermine and getting to see Crosis, Disrupt, and Yawgmoth's Agenda. After another two turns of each player playing land Raphael drew and played a Pyre Zombie. Then, Raphael attacked putting Eric to 18. Eric stopped and thought at the end of his turn, then cast Recoil on an Urborg Volcano, casting a Disrupt on his own spell and paying the one mana so that he could draw a card. Raphael discarded the Urborg Volcano looking at the mountain still in his hand. Eric had the choice at this point to cast Crosis, Fact of Fiction, or Yawgmoth's Agenda. Eric untapped and cast Crosis. At the end of turn, Raphael Terminated the Crosis. Raphael then topdecked a Skizzik and played it with the kicker cost. He attacked, putting Eric to 11 life. Eric then cast his Fact or Fiction during his main phase and the piles Raphael made were Void, Fact or Fiction, and Flametongue Kavu/Opt and Undermine. Raphael stopped and thought about it, then declare those to be the piles. Eric chose the first pile and passed the turn with 2 land untapped. Raphael attacked putting Eric to four life, then showed Ghitu Fire in his hand and Eric scooped his cards. After the match, both players were friendly and discussed their mulligans. Eric questioned his play when he cast the Crosis. He thought that he had screwed up that play. Both players shook hands and packed up their cards.