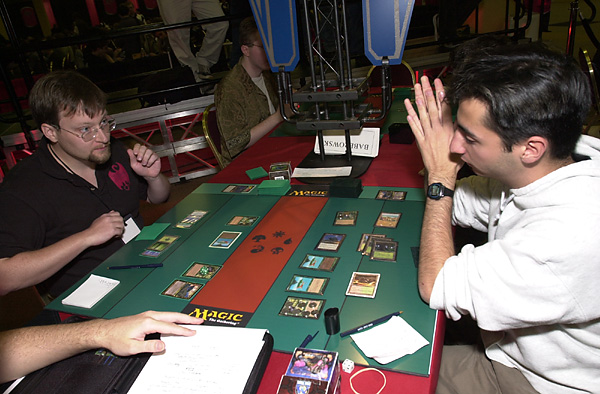 Rob placed Top 8 at Pro Tour NY 1999 and was on the winning team in Washington DC for 1999. Every report involving him mentions his affiliation with the inimitable Your Move Games, and this report is no different.

Before the match started, Raphael expressed mild discomfort with the Feature Match Official Game Board and the symmetric placement of library, graveyard, etc. As it turns out, if you don't like the Game Board, there is not much you can do about it . . . except work chair preference into the roll for play/draw choice! Raphael and Rob did so: Rob won the roll and elected to play first, so Raphael got to switch seats, putting the library and graveyard to his right. 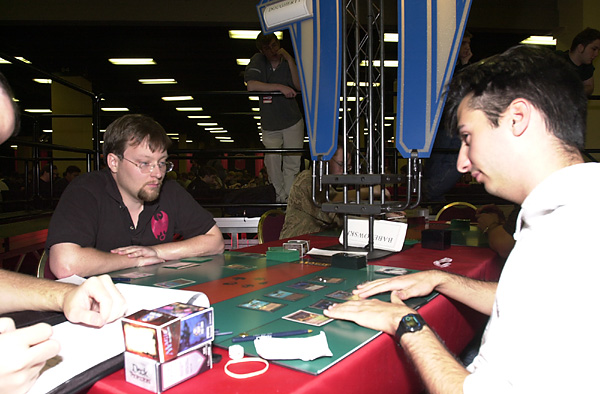 Both kept their initial hands. Both players had aggressive early play. By the end of turn five, however, Raphael gained board advantage by attacking with Blastoderm and Chimeric Idol, seeing Rob block with River Boa and an Idol respectively, and then sacrificing his Fires of Yavimaya to save his own Idol.

A turn later, Raphael presented a Saproling Burst, and possibly wished he still had the Fires out. He still served enough (combined with Rob's generous use of pain lands) to bring his opponent down to 11. With slight Rishadan Port advantage on top of creature advantage, Raphael seemed in good position to grind down.

Rob saved himself with his own Saproling Burst, at which point both players and this reporter spent the next few turns watching the Bursts slowly fade at each other.

Finally, with his Burst about to disappear, Rob played a second one, and used his Fires to get three Saproling tokens attacking right away alongside a Blastoderm. Raphael showed Wane here, and the Blastoderm, doubtless wondering where his friends got to, was double-blocked by an Idol and a Battery token. Rob finished clearing the board with a one-point Earthquake, and kept a River Boa alive to start up a new army.

The next phase of the game was, as Raphael put it, "the race to death." Rob soon had two River Boas out, backed up by Fires of Yavimaya. Raphael still had an impressive force of (four) mana birds and a Chimeric Idol. From turn 16 on, as a Boa slipped through here and there, Raphael spent a great deal of time counting lands and other available mana, for both players. Rob pushed him a bit on time, and eventually it played out:

On Rob's turn 19, he swung with one River Boa, using Fires when Raphael's Idol blocked to get rid of the artifact creature (and regenerating his Boa). On his next turn (20), he swung with both Boas. One killed a chumping mana bird; the other got through for damage to bring Raphael down to 12. On Rob's end step, Raphael played Rhystic Lightning and Rob paid two of his available five mana to end up at 8 life.

On his own upkeep, Raphael found one of his lands tapped by Rob's Port. He still had enough mana to play an 8-point Earthquake... but not enough to dilute Rob's 4-point Rhystic Lightning in response, which forced the game into a draw. 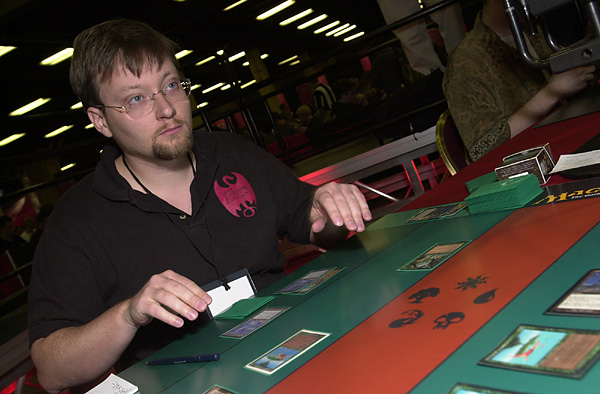 An interesting rules point: when players draw a game, the person who had choice of play/draw that game maintains choice for the new game. So all of you who have been out there re-rolling after a draw, cut it out.

Game two went much more quickly than game one, in part because the match time was almost over and neither player wanted much to end up in another draw. Rob's army came out more smoothly than Raphael's, sporting a Blastoderm, Saproling Burst, and Jade Leech by turn seven. At 8 life, Raphael was relieved to be able to play his own Saproling Burst the following turn.

Rob played a devastating Calming Verse, but with his Burst tokens weak with time and his Leech and Blastoderm facing resistance from River Boas, the going was slow. Time was called on Raphael's tenth turn, while he was at six life. By calling on his entire army, including two Elves, an Idol, a Leech, and a Blastoderm, Rob was just able, on his 13th turn (the fifth after time was called), to come through with lethal damage.