If you follow competitive Magic, it would be hard not to be familiar with Team Your Move Games. Usually, though, you are thinking of Darwin Kastle, Rob Dougherty and Dave Humpherys. Team yourmovegames.com consists of Dan "Shockboy" O'Brien, Danny Mandel, and Peter Vabulas. As their name implies, these fine young gents play with their more accomplished teammates at the famous Your Move Games in Boston, MA. 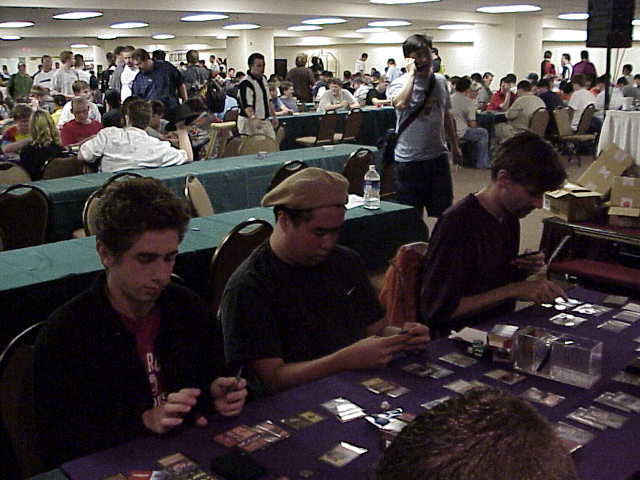 In the A seat, Vabulas with red/green squared off against Hacker's action packed black/blue deck. Vabulas led with Werebear, and Hacker played Dusk Imp. Vabulas made a few random creatures, while Hacker played Chamber of Manipulation followed by Malevolent Awakening. Those two cards together would allow Hacker to kill one of Peter's creatures each turn while also gaining a blocker, virtually locking the game. Hacker carefully watched Peter's reaction as he dropped the Awakening, hoping to see defeat. But Peter just cast Elephant Ambush at the end of Brian's turn, and Acorn Harvest twice on his own turn. Hacker did the math and figured out that Overrun still couldn't kill him, but Vabulas had the Rites of Initiation he needed, discarding five cards to sneak out the victory!

In the second game, Hacker played first and dropped a Rotting Giant on turn two. Peter matched him with Wild Mongrel, and the next turn discarded two extra land to kill the Giant. He did nothing else though, while Brian played Dreamwinder and then Faceless Butcher. Peter finally cast an Elephant Ambush, but Hacker played two more creatures to keep the board solidly in his favor. The elephant token was enough to keep him from attacking with anything but a Dusk Imp, and for a few turns nothing changed. Then the elephant traded with the Dreamwinder, allowing Brian to attack. It was all part of Peter's plan though, as he played his second Elephant Ambush, which he had been patiently holding. The elephant blocked the Butcher, and Hacker looked dismayed as the Mongrel returned to play. He was still swinging with the Dusk Imp, and on consecutive turns played Chamber of Manipulation, Cephalid Broker and Cabal Toturer, while Peter just played more land. He flashed back an Elephant Ambush when he got to eight mana, in response to which Hacker removed the other Ambush. Then Peter played Petravark, which he had been holding, to get rid of the Chamber (don't say patience doesn't pay off), and Swelter to kill the Torturer and Broker. Brian Morbid Hungered the elephant token and held his Dusk Imp back. Vabulas drew an Acorn Harvest, and Hacker was out of gas and soon dead.

Meanwhile, in the C seat, Shockboy played versus Jeff Cunningham. Shockboy started with a couple of cantrips and a Cephalid Scout from his U/W deck, while Cunningham's theoretically aggressive deck didn't do anything until a turn four Brawn. O'Brien had no answer but to Dematerialize it, and it came back soon, with Dan doing nothing. Jeff smelled a Second Thoughts or Chastise, so he chose not to attack. Dan knew the jig was up, so he played Possessed Nomad and Patrol Hound. Jeff still had no other creatures on his next turn, so O'Brien got to play Floating Shield on his Nomad. Jeff finally got out an Ember Beast followed by Diligent Farmhand and was able to attack. Shockboy blocked the Farmhand with his Nomad. Cunningham cast Sudden Strength on the Farmhand, but Dan had a Guided Strike. Jeff had another trick with Muscle Burst, drawing a groan from the Bostonian. Dan played a Mystic Zealot, now at threshold, hoping to stop the attacks. But, Cunningham kept the pressure on by casting Seton's Desire on Brawn and Reckless Charging both Brawn and the Ember Beast. Now we know why Jeff didn't have any creatures! Dan played Phantom Nomads, which didn't seem like an answer, but he still had that Second Thoughts that Jeff had guessed many turns before, which took out Brawn. Jeff never managed to get enough of an offense going after that, and the Zealot finished him. 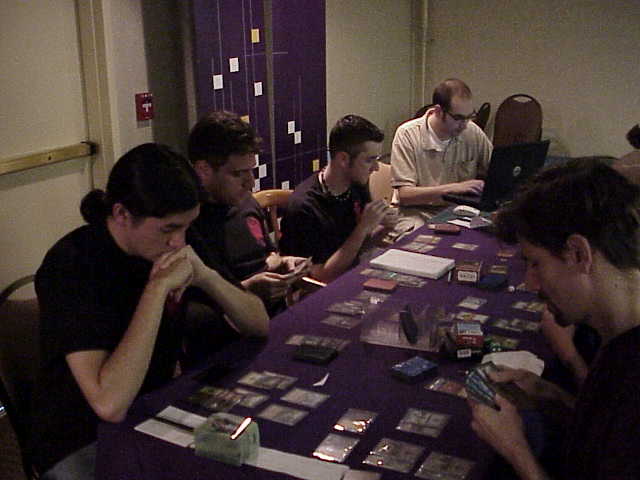 In the second game of this match, Cunningham came out strong with Ember Beast and Phantom Centaur, while Shockboy only had three plains. He eventually had to try to draw into land by playing Guided Strike, but it didn't work and he was forced to discard. Jeff played a fifth turn Gorilla Titan with no cards in his graveyard, but O'Brien drew a fourth land and had Chastise. Still, Dan's start had just been too slow, and with the addition of a Diligent Farmhand and Seton's Desire to Jeff's army, the game was soon over.

So the Cunningham-O'Brien match went into the final game. Jeff came out fast again, with Chatter, Mongrel and Mad Dog. O'Brien again stalled on land, after playing only an Angelic Wall. Jeff discarded Violent Eruption to his Mongrel to kill the wall and do more damage to Dan. Dan tried to muster a defense with Possessed Nomad, but Cunningham had a Sudden Strength and the game was over.

In the final match, Gab Tsang and Danny Mandel paired off. Gab was playing a blue/white deck, while Danny had blue/black. Gab started well with first turn Benevolent Bodyguard and second turn Mystic Familiar. Mandel responded with Mental Note and Deep Analysis and then two Innocent Blood. Tsang still did nothing else, and Danny played Organ Grinder and Cephalid Sage, already at threshold. Gab was able to Second Thoughts the Sage, but Mandel's hand was full of removal and Tsang never kept another creature on the table for long. Eventually Danny was able to finish him off; the exact creatures he used seemed irrelevant.

In the second game, Canadian Tsang was forced to Paris while playing first, and then stalled on mana for a few turns. Luckily for him, Mandel had to play a Cabal Pit to get out Cabal Torturer, and then stalled himself. Gab played Nomad Decoy and Aven Fisher, and Danny decided it was worth it to Afflict to try to draw land rather than wait for another land so that he could both Afflict and Torture in the same turn. He did draw a land, but then Tsang dropped Glory and Danny knew he was in bad shape. He made a Skywing Aven to block, but Gab had Hypochondria so the Aven was just a speedbump. Danny drew more land though, and was able to Patriarch's Desire the Aven Fisher and tried to Ghastly Demise the Glory. Tsang had Liquify for the Demise and then played a Vigilant Sentry, although he was nowhere near threshold. Mandel had Waste Away for Glory, but that just let Gab have its incarnation ability, keeping things tough for Mandel. Gab couldn't play anything, and Danny put out a Dreamwinder to fully stop the beats. Gab had Kirtar's Desire but still no threshold, which was made even more frustrating the next turn when he drew his splash card, Krosan Beast. That's where the trouble started. 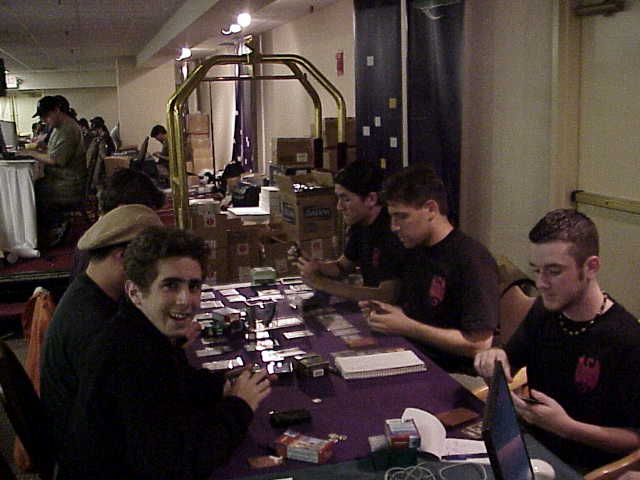 Tsang was playing fast at this point, trying to give himself a chance to win two games in the remaining time. He went to discard two cards and sacrifice Hypochondria, to get himself to threshold, but he sacrificed the enchantment first. A judge was called and after much talk it was decided that he had in fact made a mistake and would be held to it. So the Gloomdrifter that Danny cast the next turn was able to kill the Krosan Beast, despite Glory. Gab was able to Second Thoughts which meant he could drop two creatures the next turn, but they weren't the offensive powerhouses he wanted - Teroh's Faithful and Beloved Chaplain. Danny got out his Skywing Aven, which he had returned to his hand at the beginning of the game, and used Morgue Theft to get back the Balshan Griffin that he had discarded to return the Aven. Gab drew Compulsion, which this late in the game would let him dig through his deck quite quickly, but Danny tried to match it by Gravedigging his Cephalid Looter. Gab dug through his deck to a Deep Analysis and another Teroh's Faithful, trying to keep Mandel from overwhelming him. Mandel attacked with all his creatures, losing Looter and Torturer but bringing Gab down to 5. Tsang played an Aven Fisher to give himself a blocker for Balshan Griffin, and also Benevolent Bodyguard to block on the ground. Danny, who had been on the offensive despite his low life, now had to win before Gab could attack him, thanks to the versatile power of Glory. He flashed back Deep Analysis, hoping to draw one of the two removal cards out of six cards in his deck, but he drew only land and could only get Tsang down to one.

There was no time for a third game, so the match ended as a draw.