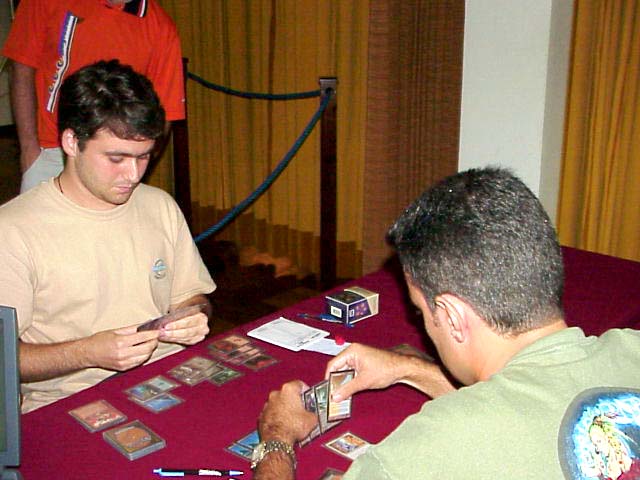 Feature matches usually begin on Round 4, when the players with all the byes enter the fray. Today, the reporting begins a bit earlier. On this third round two great Brazilian players face off in a lonely feature match. Rodrigo is a bit quiet while Sergio keeps making a lot of amusing comments during the round.

Sergio took a long time to decide but kept his hand. After a few turns of dropping lands and generally staring at each other, Sergio was forced to discard a Dismantling Blow. When he finally found his fourth land Sergio opened up with a Metathran Zombie. It got hit by a Cursed Flesh. He replaced it with a kicked Duskwalker. Rodrigo answered that with a Plague Spitter. This time Sergio was the one to react, burying the Spitter under an Exotic Curse.

The game proceeded at a glacial pace. The Duskwalker's first swing was its last due to a Terminate. Sergio's Benalish Trapper was Prohibited and his Stormscape Apprentice was destroyed by a Zap! A bit disturbed by the flurry of removal Sergio pressed on with a Razorfoot Griffin and a Sawtooth Loon, helping him cycle through the deck.

Rodrigo had still more removal. He used a Shivan Emissary to kill the Loon and then bounced it to play a Lava Zombie! Sergio dropped a Stormscape Familiar and took a few moments to consider his next play: a Crimson Acolyte. That gave him a way to stop the Zombie dead in its tracks; one that can't be killed by the bounced Emissary.

It was Rodrigo's turn to think hard and he eventually decided to use the Emissary to kill the Familiar. The Griffin came back into play while the Acolyte stayed back to block. Then Rodrigo brought in the pain: a Wash Out to remove the blockers and a kicked Skizzik! Sergio took ten damage from that swing and was pushed hard against the ropes!

Due to his precarious situation Sergio was forced to rethink all his options. After long deliberation he simply replayed the Acolyte and passed the turn. Rodrigo was on a roll and he kept up the pressure with a kicked Hypnotic Cloud. Sergio bought himself some time by casting a Rushing River with kicker, stalling the Lava Zombie and the Skizzik. In the process Sergio got mixed up and ended up accidentally showing Rodrigo that he has an Exclude in his hand.

Rodrigo surprisingly did nothing for a couple of turns while Sergio swung with the Acolyte. He then played a Nightscape Battlemage (with both kickers) to blow up a Coastal Tower and bounce the Acolyte. Sergio again had to come up with a new strategy but all he could do for the time being was replay his crucial Acolyte.

The Battlemage swung to bring Sergio down to seven and then got bounced by the Lava Zombie. With so much mana the Battlemage could get rid of Acolyte during the next turn while the Zombie swings in for near-fatal damage. Sergio had a different plan when he swung with the Acolyte and played a Hunting Drake to bounce the Zombie.

But Rodrigo was, again, in no mood to ease off and presented another problem in the form of a kicked Pouncing Kavu. Sergio took the damage hoping to stabilize next turn, but a Breath of Darigaaz finished the game right there and then. 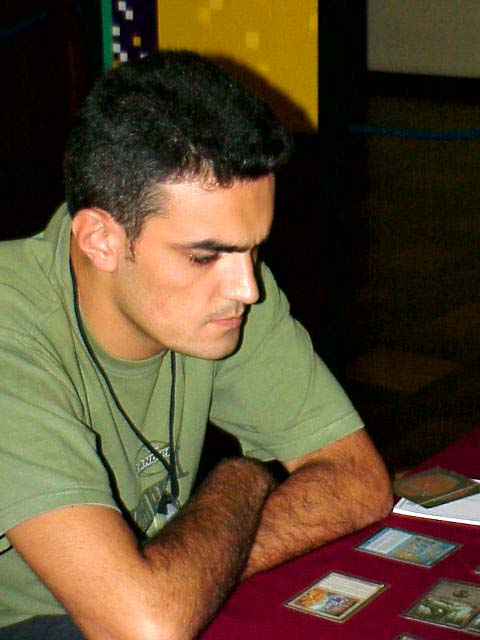 Sergio was very depressed with his deck, especially since the deck he registered was brilliant, and the great beating from the first game didn't help at all. Despite all this he felt confident that with a little extra luck he could have balanced the first game.

This time the game really started on the first turn: Sergio's Stormscape Apprentice came in. While Rodrigo dropped land after land the Apprentice kept swinging in, joined by a Crimson Acolyte and a Metathran Zombie. Rodrigo finally blinked when he reached five mana: he played a kicked Pouncing Kavu to stop the 1/1 horde.

The Acolyte kept coming in and its protection ability meant the Kavu would have a hard time getting past the other two blockers. Rodrigo used a Wash Out to bounce the two Blue creatures but the Apprentice tapped the Kavu before disappearing. After some confusion about Sergio's having already played a land, solved easily and with good sportsmanship, he played a Rainbow Crow. The bad news is that an Exotic Curse took out his Acolyte. To make matters worse, the Kavu got bounced to make way for a Lava Zombie.

Rodrigo's deck was kicking in again, but a Hunting Drake set him back when his Lava Zombie jumped to the top of his library. The Kavu came in to make way for the Zombie again but the tempo shift might have been enough. Sergio's flyers swung in to bring Rodrigo down to eight and a Sawtooth Loon (bouncing the Hunting Drake) helped him improve his hand and prepare for another round of Zombie bouncing.

Rodrigo pondered for a few minutes and replayed the poor Kavu only to sacrifice him to Death Bomb the Sawtooth Loon. The Drake again bounced the Zombie and Constanza was in real trouble. Sergio took the chance to swing in for the win and Rodrigo had no answer. 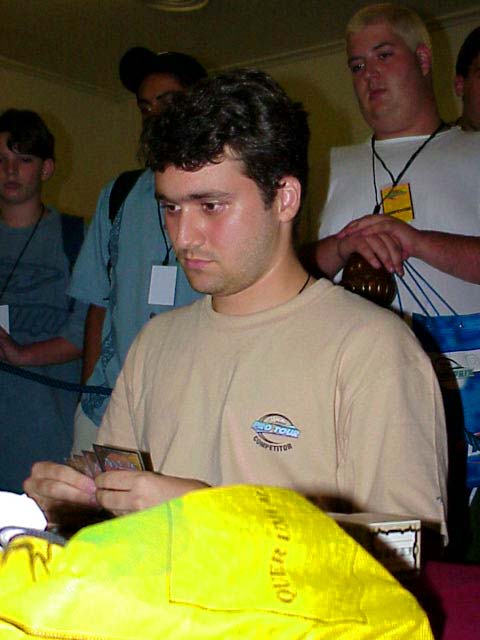 Sergio claimed his victory was an absolute miracle. He told one of his friends in the audience that even if you tried to build a worse sealed deck, you couldn't. He kept joking with anyone around, drawing laughs from both his opponent and the crowd.

This time Rodrigo opened the game. A second turn Nightscape Familiar promised fast and furious action. Sergio had a Crimson Acolyte but that didn't help when the Familiar got taken over by a Sinister Strength. That forced Junior to rebuild his game plan. He seemed to have the answer in a Nightscape Familiar of his own that gave Rodrigo pause.

He snapped back by playing a kicked Skizzik and swung in. Sergio's two creatures were now essential to simply minimize the bleeding. He still took four damage and found himself at a dangerously low three life. He dumped out a Duskwalker and a Benalish Trapper hoping to hold on long enough to gain control of the match, but Constanza Prohibited the Trapper and finished the round with a Wash Out to reduce the blockers for his amazing attacking duo.