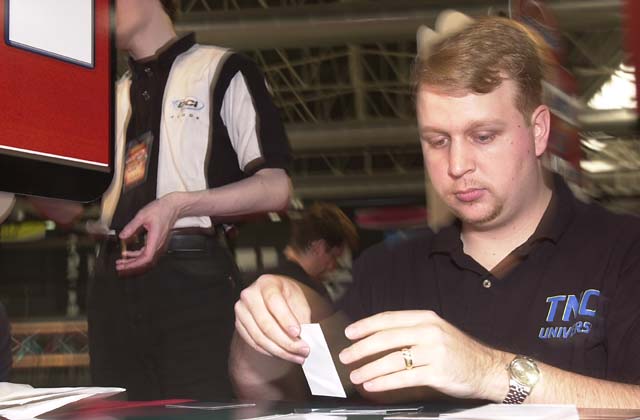 These Americans are fixtures on the Pro Tour and Masters Series circuit. Their stay in the Masters Series was brief as they both went out in the first round. So far they were doing rather better in the Pro Tour itself, as they faced off on 2-0. They have both had five Pro Tour Top 8s in the past, their first Top 8 was in the first Pro Tour LA, and they both have a win in a Team Pro Tour, so one could say they were fairly evenly matched.

Darwin had to take a mulligan in game 1, and started with a Phyrexian Battleflies. He removed Scott's Spirit Weaver with a Cursed Flesh, and Johns played a Tower Drake to replace it. They were sat next to each other in the draft, and so they knew a lot of cards that were in each others' decks.

Kastle continued to give creatures -1/-1, this time removing Tower Drake with Defiling Tears, and continued his very slow beat-down with Phyrexian Battleflies. Scott played a Crosis's Attendant that was rather larger than both the Flies and the Rogue Kavu.

The players traded damage three for three for one turn, but Darwin had a better creature when he finally drew his fourth land - Phyrexian Scuta. Scott attacked with the Attendant and when Kastle blocked, used Breath of Darigaaz to clear the board of all but Phyrexian Battleflies.

The Your Move Games player had another impressive rare creature ready for his next turn, paying the kicker on Skizzik and forcing Scott to sacrifice his Ancient Spring to Spite it. Scott had nothing but land in his hand, and had to watch as Darwin summoned an Ancient Kavu and then Recovered and replayed the Skizzik. Johns drew another land and scooped.

Scott started out with a first turn Tidal Visionary, and Darwin with a second turn Nightscape Familiar. Darwin thought for a while and decided to trade creatures, as he had plenty of land in hand, and the Visionary was a pain for him.

Scott played Tower Drake and Darwin summoned Caldera Kavu. Kastle removed a Glimmering Angel with Exotic Curse and then destroyed the Tower Drake with Strafe. "Good turn," said Scott as he took two from the Caldera Kavu as well.

He played Crosis's Attendant which was big enough to stand in the way of Caldera Kavu, and attacked with it after Darwin played Phyrexian Slayer. Darwin's draw appeared to be very good. Razorfoot Griffin from Johns was killed by Scorching Lava, and Darwin added a Hate Weaver. 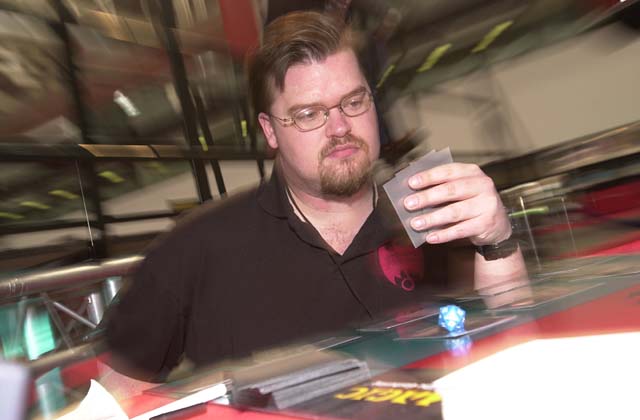 Kastle played a second Swamp so that the Attendant could no longer trade with Caldera Kavu, and attacked again. This attack reduced Scott to eight, and he was once-again reduced to sacrificing his Ancient Spring to Spite the Caldera Kavu.

Scott attacked with Dream Thrush and Crosis's Attendant, which put Darwin on ten. Johns bought himself another turn by using Rushing River on the Phyrexian Slayer and this gave him the time to draw a Hobble to permanently deal with the Slayer.

Darwin drew land after land and couldn't do a thing as the Attendant reduced him to one life. The turn before Kastle would die, Johns played a Vodalian Serpent as well, but this wasn't even necessary as Darwin had nothing but lands in his hand. So far both games had been decided by one player drawing too many mana sources at the end of the game.

This game started slowly with Kastle going first but it was Johns who had the first spells. Angelic Shield on turn two and then Obsidian Acolyte on turn three. Finally drawing something he could cast, Kastle summoned a Nightscape Familiar.

Johns played a Tower Drake, and Darwin played a decent threat - Phyrexian Bloodstock. Johns wouldn't be using his Angelic Shield on that creature! Nevertheless, it was held off by the Obsidian Acolyte satisfactorily, and Scott played a Glimmering Angel to increase his air force.

Kastle attacked with his Nightscape Familiar and unsurprisingly Scott lapsed into thought, as there was seemingly no particular reason to attack. Figuring out what the plan was, Scott blocked and was not surprised when Darwin cast Recover. This showed that Kastle's hand was almost certainly weak and he was hoping to cycle into an answer for the flyers.

Darwin played a Phyrexian Battleflies but had to scoop when Scott gave all his creatures protection from Black and swung in.