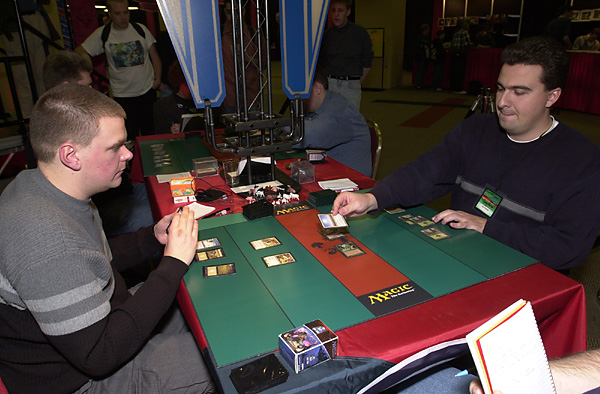 Sigurd Eskeland and Igor Frayman are PT veterans and friends, but they've actually never played a match of Magic against each other. Anywhere. Ever. They're both fixtures on the money draft circuit, but their personal rule is that they never draft against each other. They've never been paired against each other at a PT either and they're both "too lazy to playtest." Frayman is running a green/white Creature-Geddon deck that Brian Hacker helped him put together. Eskeland is running a Rebel deck that splashes blue for Power Sink. It might seem odd to splash an entire color just for Power Sink, but the deck's designers were very happy to take Plains out of their deck in favor of Coastal Towers and Adarkar Wastes because they expected a lot of their potential opponents to run Flashfires as their anti-Rebel sideboard card. The other popular anti-Rebel "tech" is Tsabo's Decree, which Power Sink certainly helps against. Eskeland acquired this deck because he's rooming with Mattias Jorstedt and another member of "Team Rejects." The Rejects (including Alex Shvartsman and world champions Jakub Slemr and Brian Selden) formed from the remnants of Mogg Squad and the European Alliance when those two teams broke up 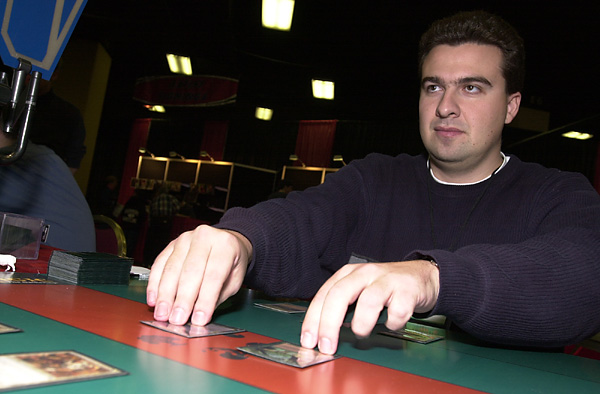 Frayman started fast in game 1 with River Boa and Noble Panther. He tried to cement his board advantage with a turn 4 Armageddon, but Eskeland had Power Sink ready. Frayman did play Tangle Wire on his next turn, but Eskeland was able to recruit so many Rebels into play that the Wire didn't hurt him that badly. Frayman tried to punch through the final five points of damage with a Parallax Wave, but Eskeland had Disenchant ready and Eskeland won shortly thereafter with a swarm of Rebels.

Both players tried throwing knockout punches early in game 2. Frayman's turn 3 Blastoderm looked like good beats, but Eskeland hard cast a Defiant Vanguard. Frayman answered back with Parallax Wave, but Eskeland had Wrath of God ready to sweep the board and start over. Frayman played out a second Blastoderm, a Sterling Grove, and a Noble Panther over the next few turns. Eskeland played out Mageta and then Frayman got to show off how good Sterling Grove can be: he sacrificed the Grove during his upkeep to go get a Parallax Wave, which could phase out all Eskeland's creatures and clear a path for Frayman to deal lethal damage. Eskeland played Reverent Mantra as a response to give all creatures protection from white. This meant Frayman couldn't use his Wave, but it also meant Eskeland couldn't block since all his potential blockers were white! Eskeland knew that - he was just hoping Frayman would get confused. Frayman saw through Eskeland's trick (eventually) and attacked for the win. 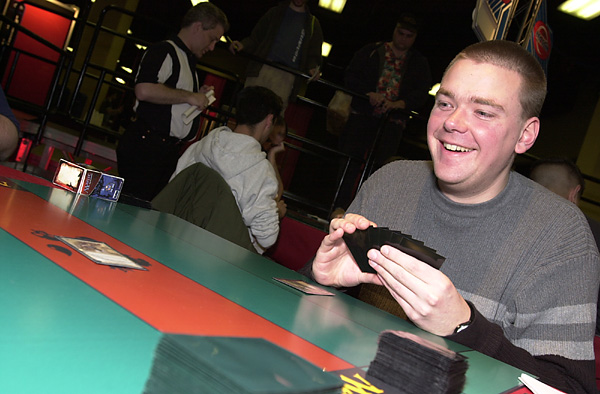 Game 3 was anti-climactic. Frayman played out an Elf and a River Boa, but he only had one land. He soon drew a second, but he was never able to cast either of the Parallax Waves or either of the Saproling Bursts that were in his hand. Eskeland had a Sergeant and a Lin Sivvi that quickly recruited a bunch of friends into play and Eskeland won the match 2-1.