Willy Edel, longtime Pro Tour competitor and Brazilian native, is facing down Conley Woods in the third round.

Woods, a member of team ChannelFireball, is coming into this event with a recent Grand Prix win with a variation on the Wolf Run Ramp archetype. Today, he has deviated to a different color combination with white over black.

Edel, meanwhile, is playing the powerful White-Blue Delver deck, with Runechanter's Pike making any one of his small creatures into a ferocious attacker. 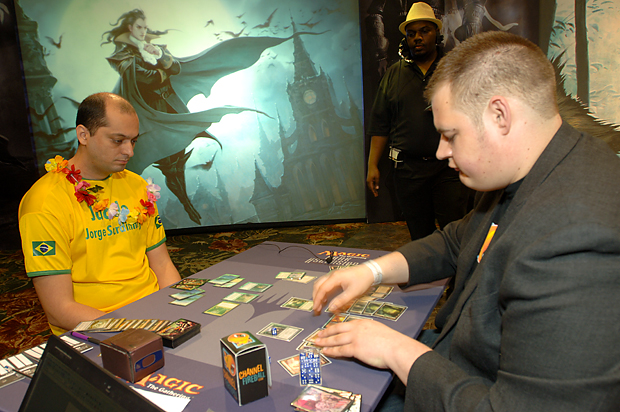 Willy Edel and Conley Woods, both firing away with their strong opening hands.

Woods won the roll and quickly chose to keep his hand, as Edel did the same. Woods led off with a turn one Copperline Gorge, while Edel's Delver of Secrets ate a Galvanic Blast. Woods used a Rampant Growth to find a Plains. Edel placed an Island and passed back, while Woods used another Rampant Growth to find a second Plains. He passed with five lands in play, as Edel used Thought Scour to fill up his graveyard. However, the Brazilian player passed with no land drop on the third turn.

While Edel waited to draw his fourth land, Woods build up his mana so that he could start playing around Mana Leaks. Once Edel found his fourth land, Woods played Primeval Titan, and Edel used two Mana Leaks to make sure the giant was countered. Edel then untapped and dropped Geist of Saint Traft onto the battlefield, but it was immediately eaten by Elesh Norn, Grand Cenobite.

Edel had an Oblivion Ring to deal with the massive praetor creature, but a second Primeval Titan elicited no response from Edel. Soon after, another Titan came down, as Woods had a Kessig Wolf Run and three copies of Inkmoth Nexus in play. Edel held off the titans with some Vapor Snags, buying time to stop Woods with a huge Kessig Wolf Run fueled attack. A Geist of Saint Traft attack put Woods to 11, and a Delver of Secrets and Invisible Stalker put Woods on the defensive.

Woods untapped and replayed both of his titans, as an avalanche of bonus lands came into play. He counted Edel's graveyard, and passed with his Sphere of the Suns and Inkmoth Nexus untapped. Edel drew, unable to flip his Delver. Invisible Stalker attacked for 1, and Edel passed back with four mana open. Woods ordered and counted his lands. Edel was only at 18, while the American pro sat at 10 life.

Woods woke up an Inkmoth Nexus and attacked with his land and both titans. When Kessig Wolf Run pumped up Inkmoth Nexus to 5 damage, Edel cracked back with Snapcaster Mage for Vapor Snag. The titans dropped Edel to 6, and a post-combat Thrun, the Last Troll gave Woods some more ground blockers. He passed after replaying his Inkmoth Nexus, sitting with three of his man lands ready to block. 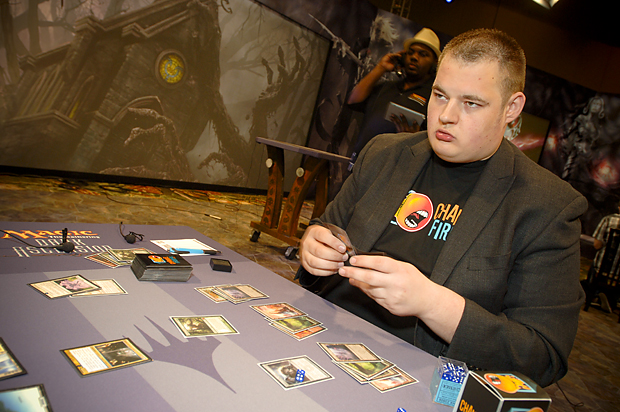 Conley Woods, with the death stare and a deadly titan in play.

Edel looked at the top of his library once again for his Delver, and shortly moved to the next game when he saw nothing coming.

Both players kept their opening hands in their second game. Edel led with a tapped Glacial Fortress into Invisible Stalker, while Woods got his ramp started on turn two with Sphere of the Suns. Stalker attacked, and Edel slowed Woods down with a Mana Leak on a second Sphere of the Suns. Woods had no action on his fourth turn, passing with five mana and an Inkmoth Nexus in play. A post-combat Thought Scour milled some spells into Edel's graveyard, as he played his fifth land and passed with four open.

Woods, meanwhile, continued to play lands with no action. Edel added some pressure to his battlefield with Delver of Secrets, which warranted a Slagstorm from Woods. Edel followed up with a replacement Delver of Secrets, and Woods started to poison Edel with an Inkmoth Nexus, putting Edel up to one poison. An upkeep Galvanic Blast took out Edel's Delver. Edel paid 2 life for a Gitaxian Probe in order to see what was up with Woods' hand: Galvanic Blast, Slagstorm, and Elesh Norn, Grand Cenobite were sitting back as Woods waited to make his plays. Edel followed up that info with a Ponder, as he shuffled his library for a different card.

Edel played a Moorland Haunt and passed with four creatures in his graveyard. An attack from Inkmoth Nexus prompted Edel to make a spirit token. Woods Galvanic Blasted the token, and Kessig Wolf Run pumped the Inkmoth by 1, putting Edel to three poison. Edel made another spirit with his Moorland Haunt as Woods deployed a third Sphere of the Suns. Runechanter's Pike threatened to make any spirit Edel had into a real concern, as he passed back with five mana untapped.

Woods played a Green Sun's Zenith for five, with three mana open. Edel responded with Thought Scour, and then let the green sorcery resolve. Woods tutored up an Acidic Slime, which promptly destroyed the Runechanter's Pike.

Galvanic Blast took out another one of Edel's spirits, keeping his board to a minimum. Edel played a Phantasmal Image on the Acidic Slime, ridding Woods of his Kessig Wolf Run. Woods used Rampant Growth to find a Plains, freeing up some of the reliance he needed on his Sphere of the Suns, two of which were down to their last counter.

Acidic Slime jumped in front of the Phantasm Image copy when Edel attacked, as a spirit put Woods to 14. Edel passed with a spirit untapped for blocking the Inkmoth Nexus, but on the next turn, Edel's spirits put Woods to 11. He was content to sit back and let his Moorland Haunt do the dirty work.

Woods slowed down the spirit beats with Slagstorm, and Thrun, the Last Troll gave him some muscle. At the end of that turn, Edel used Snapcaster Mage on Thought Scour, and then removed the Phantasmal Image he milled to make another token.

Edel played Geist of Sant Traft with five open, and Woods pulled the trigger on his Elesh Norn, Grand Cenobite with three open. Edel had Snapcaster Mage for Dissipate to stop the praetor, as Woods passed back. Edel used Ponder, leaving his cards on top.

Sword of War and Peace made Edel's spirit a lot more dangerous, and a Vapor Snag on Inkmoth Nexus when Woods woke up it prompted a concession from the American player. 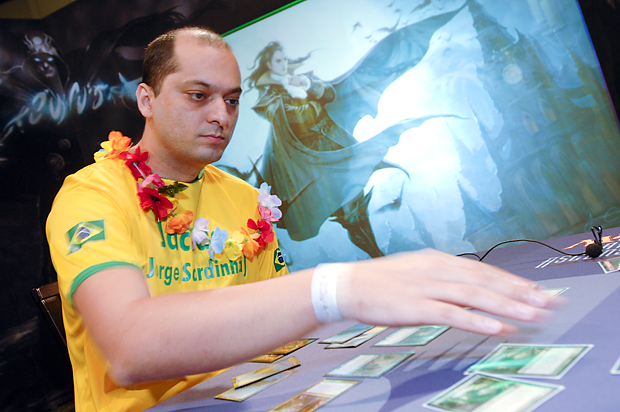 Woods led off the third game with a tapped Rootbound Crag, while Edel used Ponder, leaving his cards on top. Green Sun's Zenith for one got Woods a Birds of Paradise; not the most durable Rampant Growth, but a form of ramp nonetheless. Edel played a Delver of Secrets and then used Vapor Snag to slow down Woods on mana. Woods had a Galvanic Blast for the blue human, followed by his Birds of Paradise.

A second Ponder from Edel prompted a shuffle, as Edel tried for a new three cards. A Gitaxian Probe after that revealed lands and Thrun, the Last Troll from Woods, as Edel passed with a new Delver of Secrets and no land for the turn. Woods played out his Thrun, the Last Troll, and when Edel saw a Sword of War and Peace on top, he played Thought Scour to dispose of it and the next card. His draws that turn yielded him a third land, and Mana Leak stopped Woods' Sphere of the Suns.

Thrun, the Last Troll cracked in for four, and a turn later the troll and Inkmoth Nexus attacked Edel. The Brazilian player used Snapcaster Mage on Thought Scour, but it resulted in him losing Phantasmal Image, an answer for Thrun, the Last Troll. A third Snapcaster on Ponder found Edel his first source of white mana for the game, as his humans put Woods to 15.

Snapcaster Mage chump blocked Thrun, the Last Troll, as two Inkmoths from Woods put Edel to three poison. However, when Edel was able to transform his Delver of Secrets and play his Geist of Saint Traft, action turned around. Woods swung with Thrun, the Last Troll, putting the Brazilian to 6. He passed with his Birds and two Inkmoths ready to block. Woods woke up both of his Inkmoths, using one to block an angel token from the Geist and the other to block the Insectile Abomination. Woods fell to 8.

Woods untapped, played a land, and played Huntmaster of the Fells. It was stopped by Dissipate, but it did not stop Woods from attacking. Edel chump blocked with Snapcaster, but on his next turn another Snapcaster for Vapor Snag on the Birds of Paradise sealed the game up.

After the concession, Woods revealed an Elesh Norn, Grand Cenobite in his hand. The Mana Leak earlier on Sphere of the Suns turned out to be crippling, as Woods could not muster up a second source of white mana for his legendary creature.

4 Huntmaster of the Fells 3 Solemn Simulacrum 4 Thrun, the Last Troll