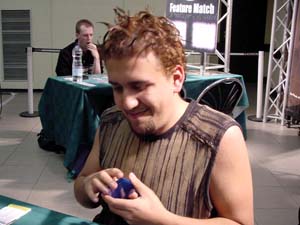 of Belgium's finest Stan van der Velden brought an eccentric March of the Machines deck to the table. Julien is with a red/green land destruction deck.

Stan won the coin flip and chose to play first. In the first couple of turns he played some lands and a Star Compass; one of the many weird cards in his deck. Julien's first play was a Viridian Shaman, but Stan decided that he wouldn't let one of his brilliant card choices be destroyed that easily, so he countered it with a Mana Leak.
Both players then missed some lands drops, although Stan was in better shape since he had land substitutions in the form of another Star Compass and a Talisman, Julien in the meanwhile still hadn't drawn his 4th land and chose to discard a Creeping Mold. A fatal mistake since the next turn Stan got out March of the Machines and swung with his animated artifacts. When Julien finally found his 4th land, he could only muster a Ravenous Baloth that could block all of Stan's artifact creatures. Then Stan decided that it was time to make his move: he played Mycosynth Lattice. The Lattice made all lands artifacts, and the March of the Machines proceeded to turn those lands into 0/0 creatures. End result: all lands were destroyed and no new lands would stay in play. Julien looked at his Ravenous Baloth, the only permanent he'd keep for the rest of the game. Then he looked at the now 6/6 animated Mycosynth Lattice and scooped up his cards.

While the players were shuffling for game 2, Stan commented: "I was happy to see you discard a Creeping Mold!" Which is fair enough: March of the Machines is the only way in Stan's deck to deal damage.

Stan's opening hand, consisting of 3 Plains, Leonin Abunas, Thirst for Knowledge, March of the Machines and Mycosynth Lattice, was a questionable one. After some thinking he decided to keep it and luckily for Stan his first two draws were Mirrodin's Core and Grand Coliseum, providing him with the necessary blue mana.
Julien's hand was fairly good too, since he accelerated into a turn 3 Ravenous Baloth on the verge of Birds of Paradise. A second Baloth quickly joined, putting Stan under some pressure. Stan looked unfazed and with a blocking Leonin Abunas and Pulse of the Fields he made sure that his life total wouldn't drop.
When Stan hit 6 mana he put out Mycosynth Lattice. Julien read it a couple times on his turn, and then attacked with both of his Baloths. Stan blocked one with his Abunas and dropped to 8 life. Pyroclasm got rid of the Abunas after the attack, but Julien lost a Ravenous Baloth and the Birds of Paradise in the meanwhile. 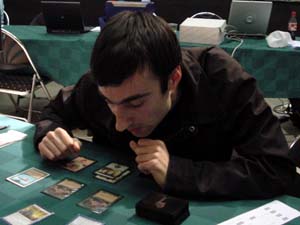 Julien's next 2 turns featured a Viridian Shaman to kill the Lattice and Ravenous Baloth. Stan could only muster a March of the Machines in the meanwhile, but had no artifacts to go with it. Stan worked on his life total with the Pulse and played a business card: Future Sight. Julien had to Creeping Mold it, but with only 4 lands on his side of the table that meant he was tapped out. Without fear of an instant Naturalize, Stan could now safely play Mycosynth Lattice to get his lock in play. Julien took his turn and realized that he was beaten. When he tried to scoop up his cards he realized that all of his lands were already in the graveyard, so he just shook Stan's hand.