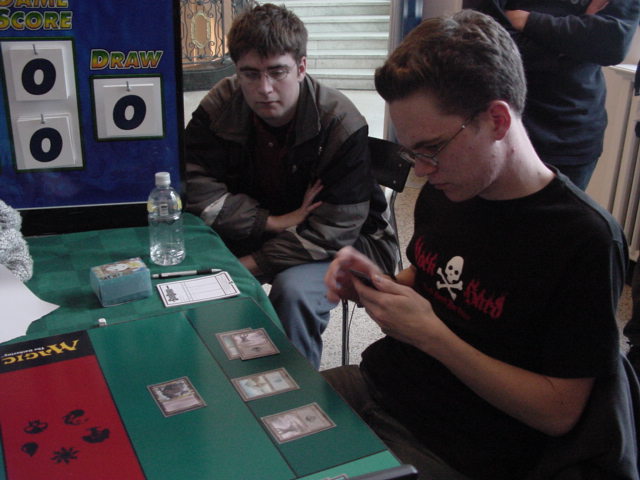 Svante Landgraf is a Swedish player known for his deck building skills who managed a top 8 at GP Oslo last year with an unorthodox Dark Solution deck. Jan Tomcani is a solid player from the Slovak Republic who made the top 8 of world’s last year.

Tomcani is running the blue-green flashback deck using Quiet Speculation to load up his graveyard with Roar of the Wurm and Grizzly Fate. Landgraf is running blue-black Upheaval/Infestation.

Tomcani took a look at his opening hand and immediately tossed it straight back. The six cards were better and he immediately made up the deficit by chucking a Roar of the Wurm into the graveyard with Careful Study. He didn’t really get any early pressure, not summoning anything until baiting out an edict with a Wonder on turn 4. The Roar that followed was Enveloped and Landgraf looked fairly solid with a Compulsion on the table and then casting Deep Analysis.

This left Landgraf with just a swamp open and Tomcani took the opportunity to fill up a monster graveyard with two Quiet Speculations. A Wurm was the first to hit the table, with Mongrel as edict bait. Now Landgraf didn’t look too comfortable and cycled cards off Compulsion to find answers. 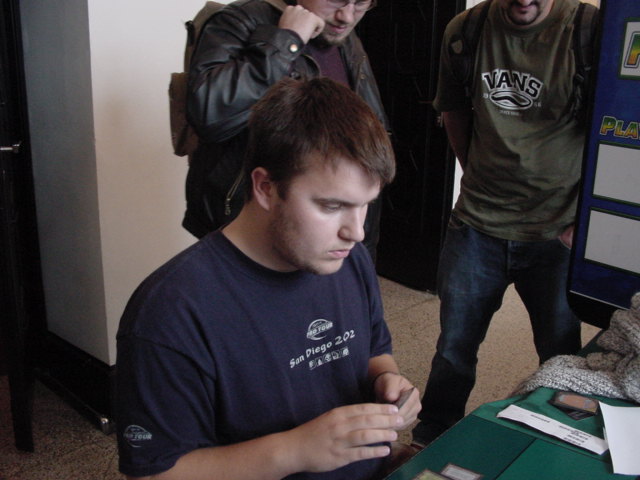 Two Edicts did the job and an Envelop was on hand to take down a Grizzly Fate. A Logic took down a second the turn afterwards but as he was stuck on one island the Swede couldn’t gain a card off it. Tomcani was always careful to leave an island open to Envelop any possible Upheaval.

Landgraf dropped Infestation then Standstill to try and claw back some advantage. Finally a Grizzly Fate resolved and Landgraf was facing 4 bears. Yet another edict reduced the number somewhat but Tomcani kept cranking out threats – another Mongrel and a Wurm token from his stocked graveyard.

Aether Burst took care of the Wurm but there was still plenty of trouble. Landgraf was forced to ask the question. He tapped 7 mana and went for the big Ups. As anticipated Tomcani had Envelop as an answer and it was onto game 2.

Landgraf started well, Enveloping Tomcani’s turn one Careful Study and dropping Standstill on turn 2. Tomcani broke it immediately, taking the opportunity to put Acorn Harvest, Roar and Deep Analysis in his graveyard with Quiet Speculation. Psychatog appeared on the Swede’s side while Tomcani developed his hand with the Analysis and then hitting another Roar with Mental Note. He flashed back the Harvest and a second Speculation ran into an Envelop from Landgraf.

Mr Toothy Grin ate a squirrel and the first Roar never appeared as Landgraf Synced it. The second hung around as Tomcani protected it from Edict with an Envelop. He followed it with Grizzly Fate and still had an island left open to represent Envelop.

Landgraf tried to draw it with Mutilate, first making his Tog bigger. Tomcani let the bears die. He struck with the Wurm and then pre-empted Landgraf’s possible Upheaval with one of his own.

A Catalyst StoneAccelerated out a Wurm but Landgraf had an Innocent Blood. A Syncopate for Tomcani’s Grizzly Fate allowed Landgraf time to bring back the Tog. It didn’t look quite as good as Tomcani got a Grizzly Fate to resolve with the threat of it being flashed straight back again the next turn. Landgraf summoned a second Tog and tried to think of a way to slip one through. Tog’s and Aether Burst reduced the bear population to one until Tomcani flashed back Fate to bring it back up to 5. Togs stayed back on defence but couldn’t hold back the marauding bears.