Both players are well-respected foes on the PTQ circuit and each have multiple Grand Prix Top 8s to their credit. Higaki is more well known for his failure to finish is the Top 8--ninth to be precise. After the last GP Shizuoka when he finished highest among non-Top 8 competitors--once again--he earned the unfortunate title of Mr. Ninth. He is also known as the Master of Oiso. Last year when attempting to qualify for Pro Tour Boston he took an unknown friend by the name of Masashi Oiso onto his squad. When they qualified at a local PTQ in Japan they were off to Boston. A strong Day two finish there was the start of a remarkable year for Oiso at his first ever Pro Tour.

Yuuki has been a member of the Japanese National team and is from the Sendai area. It was at his hometown GP in 2001 that he last saw the Top 8. He was hoping to make a return visit this weekend. 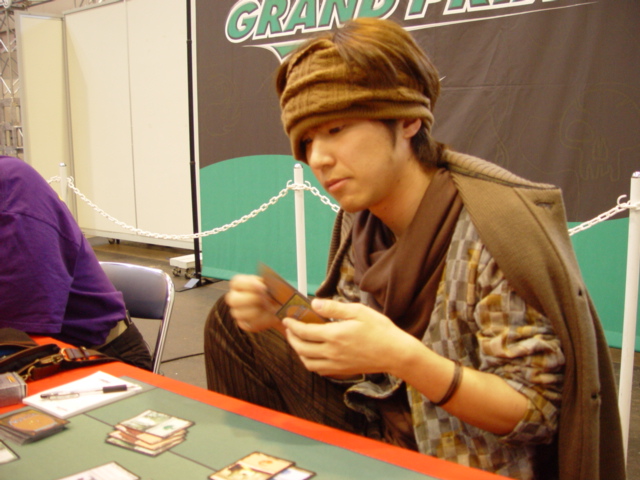 Higaki had a Battlegear all his own which was going to be trouble on a regenerating Exile. The Exile picked up the equipment on schedule and bashed in for five. Murakami had to think. He had five lands and a pair of Myr. He wanted to play his Warhammer--or Battlegear for that matter--and attack but he did not want to lose the tempo to the Crystal Shard. He finally tried to equip the Bladewarden with the Warhammer and it was Spellbombed back to his hand. One card down but the pesky Spellbomb still loomed.

The Exile got in for five more and the Warhammer was infected with a Creeping Mold--perhaps he should have led with the Battlegear. Murakami replayed the Bladewarden and also put down the Battlegear. Higaki tapped him out save for the Myr with an EOT activation of the Shard and on his own turn played a Dragon Blood sending both of his men into combat. Murakami shook his head while the stylish Higaki laughed confidently. With five one-power creatures it was difficult for Murakami to muster a reasonable block--he was at eight.

There did not seem to be a way out for Murakami but he weighed all of his options carefully nonetheless. Sadly for him all the permutations involved him throwing away creatures to stay alive. Finally, he put a Wizard in the way of the five power man and dropped to six. Higaki played a Mask of Memory and passed the turn with confidence.

Murakami played a Soldier Replica and equipped his Bladewarden with the Battlegear. He had to tap a Myr to thwart the Crystal Shard and had only one mana in the form of another Myr available on Higaki's turn. Cobalt Golem took to the air and both of his creatures went to the red zone. Murakami put his Wizard Replica in front of the flier and all of his remaining men in the way of the 5/5. The Bladewarden pumped the Replica to kill the flier but died in the process from wounds inflicted by the regenerating Exile.

Murakami had Fangren Hunter and a Serum Tank to work with in his hand and he played the trampler. He got in for one with his flier and passed the turn. He put his Soldier Replica in the way of the Exile but a Predator's Strike and a Dragon Blood activation put him away with trample damage.

Murakami sided out most of his green for Barter in Blood, Muriok Scavenger and Pewter Golem. He was turning his black splash for Irradiate into more of a base color while his base green became a splash for Deconstruct. 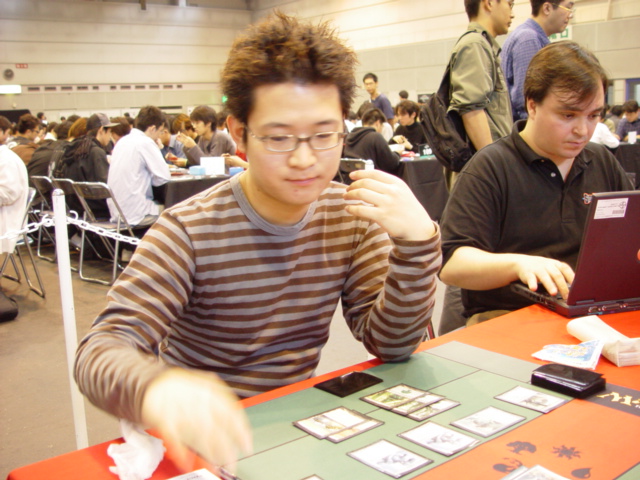 Higaki followed with a Neurok Spy and when Murakami used Barter in Blood Mr. Ninth saved the Spy with three mana and the Shard. The Spy made a reappearance and Murakami played Leonin Abunas. Higaki had an which earned a groan from his foe. A Skyhunter Patrol arrived for Murakami and he was pecked at with the Granite Shard. Neurok Spy picked up the Mask of Memory but the turn was passed with no artifacts on Abunas's team to protect.

Murakami wanted to play an artifact creature but first he had to deal with the Mask on the Spy. He Deconstructed it and played a Myr Enforcer and flew over for his first damage of the game. Higaki attacked with his Spy. After combat he tapped all his mana including both Myr and announced his spell with a word that transcended language barriers, "BOSH!"

Murakami tried to calculate his board position--he was at eleven. He looked over at the Neurok Spy and Granite Shard. He carried the converted casting cost of Bosh and when he was done with his sums conceded with a good natured shake of his head and the pronunciation that Higaki preferred, "BOSH!"