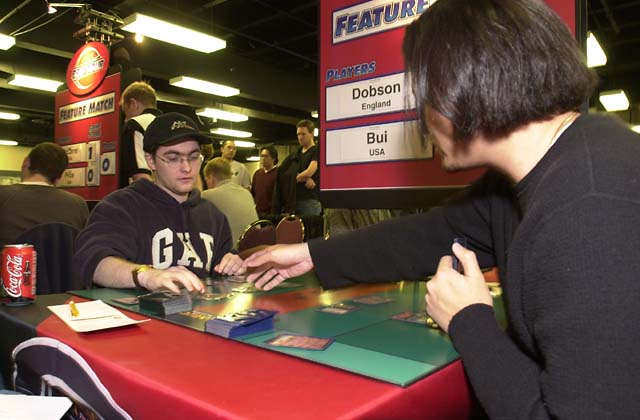 Tony won the coin flip and chose to play first. After he mulliganed to six, he was the first to play a non-land permanent on turn two: Ravenous Rats. Truc discarded Backlash, drew for his turn, and played Hooded Kavu. A couple turns later, Truc played a Phyrexian Slayer and then Thornscape Master. When it looked as if the game was in Truc's grasp, Tony cast Fact or Fiction, which gained him some card advantage with a Metathran Zombie and a couple land. Truc kept attacking with his Slayer as Tony Probed (with kicker) away Truc's Soul Burn.

Left only to top deck, Truc played a Kavu Aggressor to try and out-race Tony. Tony cast his own Phyrexian Slayer to trade with Truc's, then played a Shoreline Raider to hold off Truc's Kavu. To solidify, Tony repulsed Truc's active Master (which had been slowly sucking life from Tony), only to exclude it when Truc tried to re-cast it. Tony then played Zanam Djinn and started getting aggressive. Truc had been mana flooded the whole game, and left to try and top deck his way out of an impossible onslaught. He received a Battleflies from the top of his deck, which was a pitiful wall against the Djinn... especially when Tony Cursed Fleshed it to come through for lethal damage. 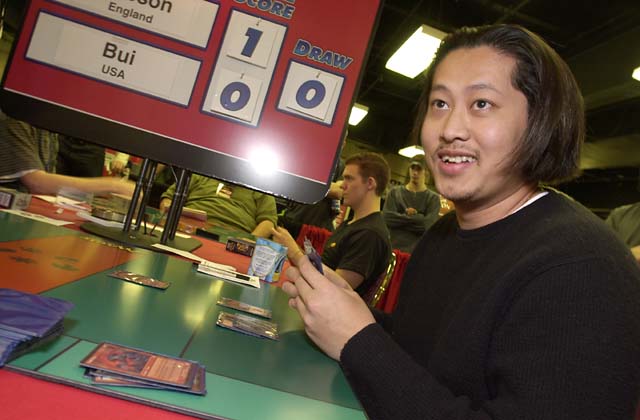 Game two, Truc decided to play. This game was all about casting small creatures and trading until both players were very low in life. The first non-land permanent was Tony's Ravenous Rats (which made Truc discard Urborg Phantom), and Truc followed this with a Sparring Golem. To regain a little card advantage, Truc Zapped Tony's Rats. This game, Tony was the first to cast a Slayer, but this did not stop Truc's offensive. However, Tony's Reckless Spite did stop Truc's Sparring Golem and his summoning sick Hooded Kavu. Truc eventually cast his own Slayer to trade with Tony's, then kept dealing damage, just enough to Soul Burn Tony out before Truc would have died to a fatal attack the next turn.

Game three, Tony decided to play. The first non-land permanent out this game was a Shoreline Raider on Tony's side. Truc answered this with a Slimy Kavu. Both players attack a turn with their respective creatures while they built up their mana for larger Guys. Or at least Tony had a larger guy with a Duskwalker. Truc made Phyrexian Battleflies. Things didn't look too hot when Tony cast a second Dusk Walker with kicker, but this time Truc answered with a Hypnotic Cloud with kicker, drawing a Reckless Spite, Swamp, and Exclude out of Tony's hand. Tony was left with one card in hand, and then on his next turn, Probed with kicker Truc to get a Plague Spores and Battleflies. Tony attacked with all his guys, which brought Truc down to 7, while he was at a comfortable 15. When Truc tried to regain a little card advantage through a Zap (taking out one of Tony's creatures after combat damage), he couldn't find an answer in time to salvage the match.