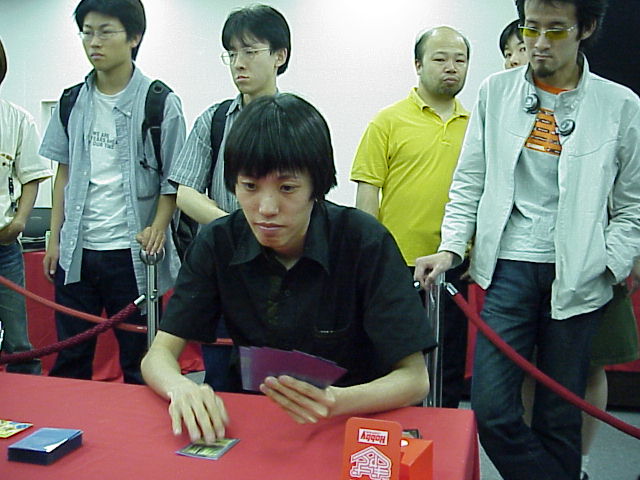 Two-time APAC Champion Masaya MoriTwo-time APAC Champion Masaya Mori has drafted an aggressive GRB deck full of direct damage, Kavu and other various big fat unhousebroken creatures, topped off with Pyre Zombie and Nemata. 2000 National Team member Tsuyoshi Ikeda is fielding a WUG deck that seems to be Mori's worst nightmare, with the Protection from Kavu Shoreline Raider, a large number of fliers, and support cards like Shackles and Strength of Unity, as well as his own Nemata.

Mori played first, responding to Ikeda's Obsidian Acolyte with a Scorching Lava. Mori knows Ikeda's deck has answers to most of his creatures, and wants to keep Ikeda in a reactive state long enough to get a creature advantage. Both players are playing fast and furious--with neither missing a land drop, continuing to make and trade bears. Ikeda managed to stabilize, holding off Mori's army of Kavu with a Shoreline Raider beefed up by Strength of Unity while swinging with a Tower Drake. Mori scooped after Ikeda played a Hunting Drake. 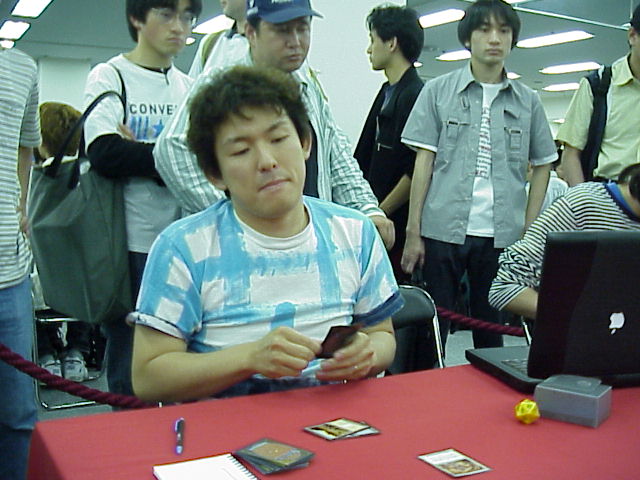 As with the first game, Ikeda's first creature, a Tower Drake, was blasted out of the sky by a Scorching Lava. However, Mori stalled at three lands, and had to play catchup with Ikeda, who continued to produce land, dropping a Nemata on turn 6. Although Mori soon drew into lands, he was under pressure from Ikeda's ever-growing army of Saprolings. Although Mori put up a valiant fight, he soon succumbed to a green death, overrun by a horde of 1/1 plants.