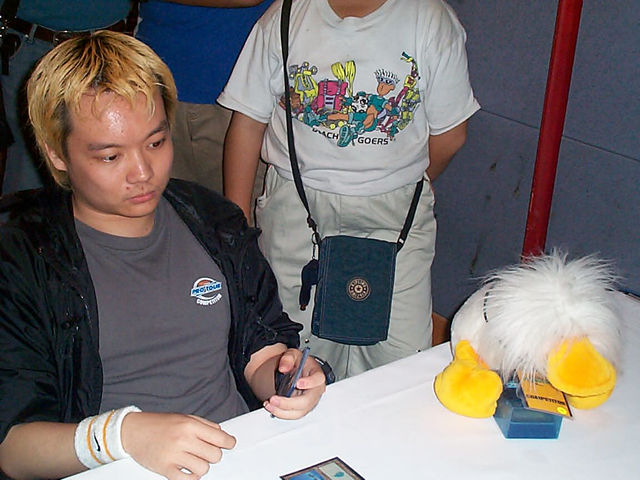 Long time rivals in the international tournament scene, Royce Chai and Nick Wong are playing in what was immediately described among both players and staff as the local grudge match. Tension between the two players was well known amongst the local players, who cheered loudly as the match was announced. They flocked around to watch, eager for the battle to come.

Wong has chosen to bring his W-U-R Counter-Trench deck for the tournament, which faced off against Chai's 'Monkey, May I?' deck. Playing first, Wong played an island, which saw a Shivan Oasis from Chai, revealing that Chai may be playing the Monkey deck. Surprisingly, tempo decks were one of the reasons why Wong chose to take the Trenches deck in this tournament. A Yavimaya Coast and Gaea's Skyfolk confirmed Wong's suspicions, as he inwardly grinned at what his testing confirmed to be a good matchup. 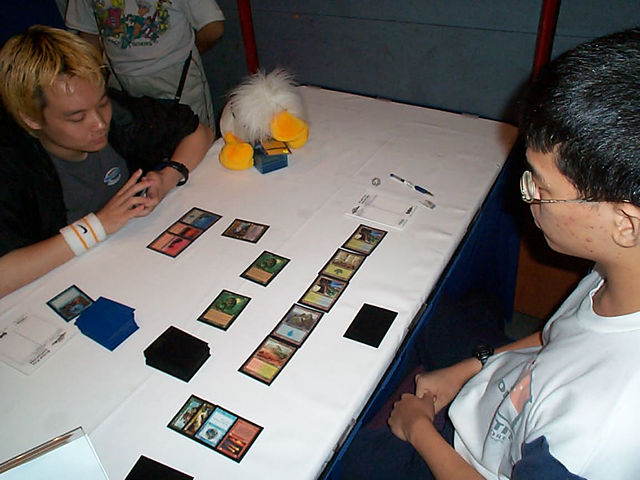 Unfortunately for Wong, the divine powers that be often play tricks that usually defy the logical odds. With no opposition from Wong, the Gaea's Skyfolk came in for 2 points of damage, before Wong removed it with an Urza's Rage. However his deck betrayed him, as Wong failed to draw his fourth land. With the phrase, "Welcome to IBC, Nick", he sighed and passed the turn. With his island tapped down with Ice, Wong was helpless to stop Chai's Kavu Titan duo, which he summoned on the next turn. Wong Opted in a valiant attempt to try and find more land, rejected the card he saw, and still failed to find land.

Chai was quick to capitalize on Wong's misfortune, sending in both Kavu Titans to take large chunks out of Wong's life total. An end step Prophetic Bolt from Chai met up with an Evasive Action from Wong, but Chai was still very much in the game, with Repulse, Fact or Fiction and Mystic Snake still in his hand. Playing around the Mystic Snake, Wong rolled his eyes, as he chose to discard his Goblin Trenches.

By the time Wong's fourth land showed up, he was already down to two life. There aren't many cards left in this format that would get him out of this situation. 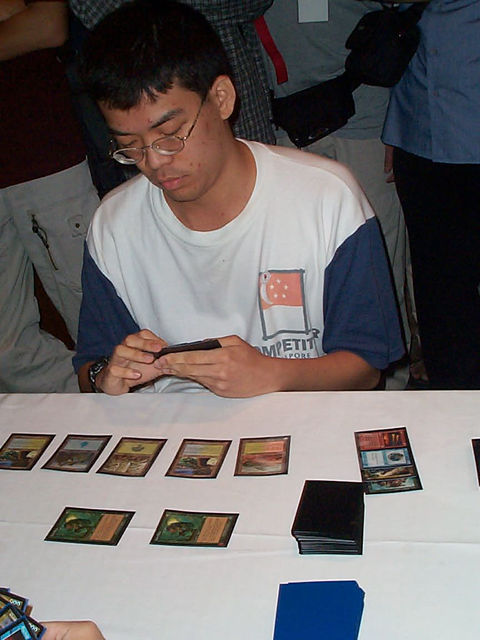 Preparing for the second game, Wong brought in a pair of Disrupts, three Gainsays and two Breath of Darigaaz from the sideboard, replacing three Opts, and a single copy each of Evasive Action, Obliterate, Goblin Trenches and Prophetic Bolt. Chai brought in a single copy of Tranquility, the full slew of Gainsays and completed his set of Urza's Rage with the last copy from the sideboard, electing to relegate his maindeck Dodecapod, one Mystic Snake, one Kavu Titan and three Repulse to the sideboard.

Wong chose to try and recuperate from his manascrew by playing first in game 2. In comparison to the previous game, Wong was quick to establish his mana base, with a Coastal Tower followed by an Island. Chai had no turn 2 plays, much to Wong's relief, as Wong played a second island to set up for an Absorb. A Battlefield Forge completed Wong's tricolor set, and he looked to be firmly in control, until a Blurred Mongoose entered play on Chai's side.

Refusing to let Wong take advantage of the situation, Chai Gainsayed Wong's attempt at a Fact or Fiction, while Wong refused to move on his own turn. Chai simply attacked with the Mongoose, meeting a second Fact or Fiction with a second Gainsay. Wong then played a Breath of Darigaaz, without the kicker to remove himself of the pestering 'Goose, with mana open to threaten an Absorb. 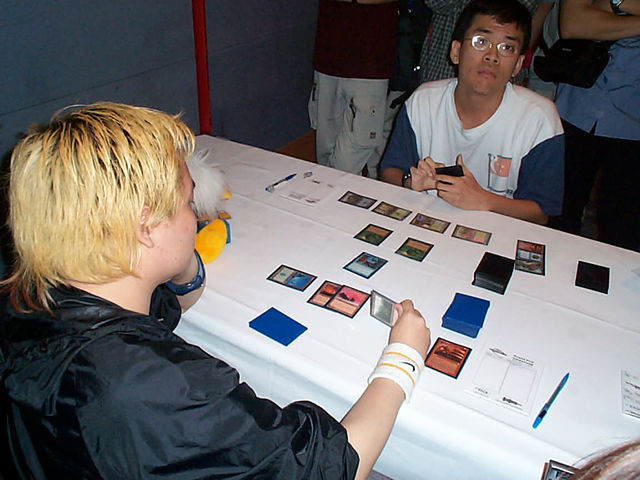 Thanks to a third Gainsay, Chai probably felt safe to test the waters a little further, and attempted a Gaea's Skyfolk, which got Excluded, and was simply replaced with an unkicked Kavu Titan. Finally, Chai drew a source of red mana to threaten with his plethora of burn spells. The Kavu Titan met up with another Urza's Rage, whereby Chai Prophetic Bolted Wong, reducing him to eight life.

With Chai nearly tapped out, Wong went for the throat with a Goblin Trenches. Trying to recuperate from the situation, Chai tried to Fact or Fiction, backing it up with his third Gainsay, but Wong had two Absorbs ready, bringing him back into the safe life zone. Chai cast another Prophetic Bolt at Wong in an attempt to take advantage of Wong's turn to be tapped out, but was only able to find a Gaea's Skyfolk.

With no cards left in Chai's hand, Wong began to try and assert total control. However, it was rather difficult to do so with his own hand also being depleted of cards. A Repulse sent back the Skyfolk that entered play again, while Wong decided to show off his newly acquired Goblin-Soldier tokens from the Player Rewards Program.

Both players were still in topdeck mode. Chai displayed his topdecking skills, peeling a second Gaea's Skyfolk, while Wong could do nothing but say, "okay", and create more tokens to fuel his offense. At just seven life, Wong had just two turns to deal the rather daunting figure of 18 damage. Chai attacked with both Skyfolk, reducing Wong to just 3. Wong now had just one turn to deal 12 damage to Royce. Tapping all his mana, and sacrificing two lands would enable him to create enough tokens to deal 10 damage. If he drew a Fire/Ice, he'd be able to finish Chai off. However, Wong chose to go with the safer plan: deal 8 damage to Royce, and then Breath of Darigaaz with kicker for the draw, which would also work, if Wong draw another land. Unfortunately, that fourth land never showed up. He attacked, reduced Chai down to 4, and died to the next attack of the Gaea's Skyfolk.

4 Lay of the Land 3 Disrupt