Round 3 Feature Match - Your Move Games vs. Huey, Ben, and Casey 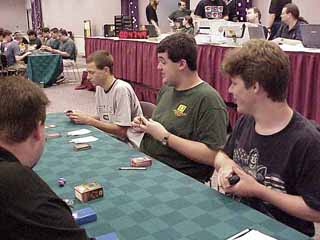 The feature matches for this event have been amazing so far: Potato Nation vs 2 Lawyers and a Leiher, Car Acrobatic Team v Egghead Games, and in round 3 it was Your Move Games against Huey, Ben, and Casey.

Dave Humpherys used Stinging Barrier to kill Casey McCarrel's Overtaker and McCarrel had trouble drawing Island #2 in his blue/red deck. Humpherys punished him and won a quick game 1. Meanwhile Rob Dougherty used Spidersilk Armor to hold off Billy Jensen's horde of Rebels. It looked like Jensen's recruiting would eventually pay off, but Dougherty dropped Dawnstrider. Huey had no way in his mono-white deck to kill Dawnstrider and he conceded once it was obvious he was going to be decked.

Darwin Kastle took game 1 as well and then Ben Rubin couldn't draw his 4th land or his 2nd color in game 2 so Kastle swept the match. Humpherys used Arrest to shut down McCarrel's 2nd game Overtaker. McCarrel played out a Coastal Piracy, but Humpherys was able to attack with fliers while leaving blockers back for McCarrel's ground creatures. Blockade Runner was able to get through and draw one card for McCarrel, but then Dehydration ended that and Humpherys finished ff the match with his fliers. Jensen boarded in Mountains for game 2, but he died to Dougherty's beatdown before Dawnstrider or red spells became relevant. (I never actually saw Jensen cast a red card - it may have been a bluff.)