Round 3 Feature Match: Your Move Games vs. Outland 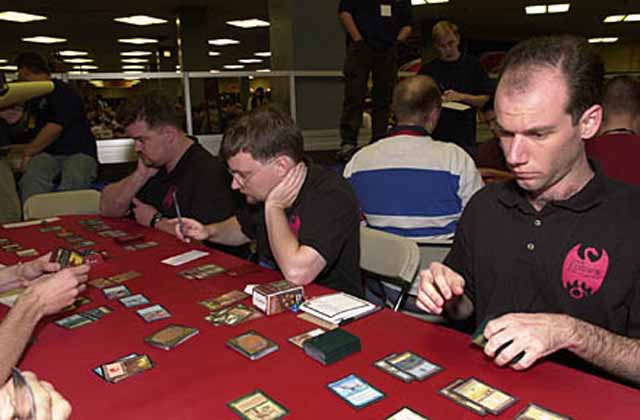 Team Your Move Games is comprised of Darwin Kastle, Rob Dougherty, and Dave Humpherys. Darwin is a former Duelist Invitational champion, and the team is the defending Team Pro Tour champions from last year. Team Outland is a Norwegian team made up on Nicolai Herzog, Bjorn Jocumsen, and Eivind Nitter. Both Nicolai and Bjorn are Norwegian national champions (Nicolai in 1999, Bjorn in 2000), and Bjorn is also a former European champion, and has placed in the Top 8 at Worlds. Eivind has yet to make a splash on the Pro Tour, but is known as "the bad boy of Norwegian Magic", and has shown up at prestigious Magic events wearing handcuffs.

Bjorn's deck was black, with a splash of blue; Darwin played black also, but with a green splash instead. Both sides built up their armies, with Darwin getting in a few points of damage with his unblockable Bog Smuggler, while Bjorn kept hitting with his Primeval Shambler, pumping it when he could. Darwin eventually fell behind in the creature race, even after using Soul Strings and casting Animate Land to create a surprise blocker, and finally Bjorn's Molting Harpy swooped in for the last points of damage. In the second game, both players trading removal for the other early mercenaries. After the initial flurry, Bjorn settled in with a Molting Harpy in the air, while Darwin used his Woodripper to pull ahead in the early damage race. When the Woodripper faded out, Bjorn was knocked down to two life, and Darwin used Soul Strings to pull back a Highway Robber and win the second match. The third and deciding game started with both players playing evasion creatures: Darwin with a Bog Glider, and Bjorn with a Bog Smuggler. Darwin again attempted to use the Woodripper to gain early advantage, but Bjorn cast Snuff Out to remove the huge threat. Bjorn was able to use his creature to bring Darwin down to 4, and then cast his second Bog Smuggler, ensuring the victory. Bjorn Jocumsen wins 2-1.

Both Nicolai and Rob were playing red, with Rob using green as a secondary color. Rob came out fast in match one, starting with a Battle Rampart, and then using the Rampart's ability to strike with a Cinder Elemental, Scoria Cat, and Fault Riders. Nicolai attempted to mount a defense with a Rusting Golem, but eventually was overpowered by Rob's army. Both players started the second game with Cinder Elementals, but Rob was able to again get the fast start, playing a Flowstone Crusher, then enchanting it with Tiger Claws. Nicolai again attempted to use Rusting Golem to mount any kind of defense, but a Gerrard's Irregulars sealed the victory. Rob Dougherty wins 2-0.

The final match again paired two similar decks, with both Eivind and Dave playing blue/white. Eivind mounts an early attack with a Diving Griffin, which Dave Topples. Eivind is able to continue to press his advantage with a Jeweled Spirit and one of each of the Bringers, while Dave mounts his own aerial army with a Rishadan Airship and a Voice of Truth. After a failed attempt to Dehydrate the Jeweled Spirit, Dave was able to counteract it with Muzzle, and squeaked through point after point of damage using the Voice and a Stinging Barrier, despite two Alabaster Walls on Eivind's side of the board. Game two began with an Overtaker and a Rishadan Airship for Dave, and a Diving Griffin and the Jeweled Spirit again for Eivind. Eivind took control of the board by Toppling the Airship, but Dave used his Overtaker to turn the Diving Griffin against Eivind. When time ran out, Eivind had some board advantage, and mounted full-out attacks on turns two and four of the overtime period to finally kill Dave. However, this means Dave Humpherys and Eivind Nitter draw, and Team Your Move Games and Team Outland also draw.