Round 3: Fellowship of the Ting vs. The Ken Ho All-Stars 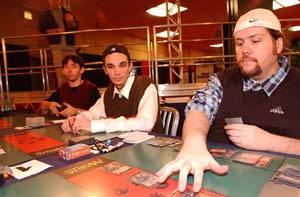 Fellowship of the Ting

"Oh my god, it's Team Pants versus Team Sweater Vests!" exclaimed superstar Lan D. Ho when faced with The Fellowship's stylish and colorful vests. The All-Stars then stood up to display their equally fascinating pants, perhaps stolen from vagrants the night before. Both teams had dropped their first two rounds, and so needed to win out to make Day 2.

Dan Clegg got the ball rolling against Rudy Edwards with Thunderscape Familiar and Viashino Grappler. Edwards came over the top with Plague Spitter, and even had a Zap to finish off Clegg's Nightscape Master. Clegg's look of concentration turned into a de facto frown.

Ken Ho had early advantage over Matthew Ranks with Stormscape Apprentice and Galina's Knight. He even had a Flametongue Kavu for Ranks's Kavu Chameleon. Ranks reset his board with a kicked Magma Burst, even though it put him further from the Nemata, Grove Guardian in hand.

Lan D. Ho's Green deck was in trouble when Joseph Crosby played an early Spectral Lynx. He managed to off it with Tribal Flames, but by then Crosby was sending in the air with a kicked Faerie Squadron. Ho tried to remove it with Stormscape Battlemage, but it was Excluded.

Next to him, Ranks had packed up his cards. Ken Ho had just kept dropping creatures, and Ranks was unable to match pace. At the far end, Clegg was doing the same thing to Edwards, but with spells. Phyrexian Gargantua filled his hand, and he mopped up everything Edwards threw down. A kicked Duskwalker started to bring the beats.

It wasn't all woe for The Fellowship. Crosby's air force, augmented by Tower Drake, didn't have to worry about Lan D. Ho's Power Armor. Confound in hand made sure no funny business would get in the way of a game win.

And with that, a miraculous reversal! After having his hand removed with Hypnotic Cloud and with just a Phyrexian Slayer on board, Edwards managed to topdeck first Hooded Kavu and then Tsabo Tavoc! Clegg had no answers for the monstrous black legend. He chumped, and chumped, then died.

Things got worse for the All-Stars. Ken Ho double-mulliganed to start his second game. He played plains, then stalled, allowing Ranks to bust out Thornscape Familiar and Nomadic Elf before he got on the board. However, that was the extent of Ranks's early beats, and so a Galina's Knight followed by Angelic Shield turned the game around.

Visiting Pro Mike Bregoli looked over from the gallery, saying "I like The Fellowship's Vests. It's a real fashion statement."

Crosby had a fast aerial draw again in game two, but this time Lan D. Ho put a stop to it with Zanam Djinn. He followed that up with another blockbuster, a double-kicked Stormscape Battlemage. Now the Djinn was on the offensive, and Crosby was in a bad way. Manacles of Decay shut the Djinn down next turn, but Ho had plenty of other dudes willing to smash. Ordered Migration with the full Domain sealed the deal.

Next to them, Ken Ho had found a second Galina's Knight while Ranks had found only red creatures. The parity suited Ranks just fine, because next turn he played Thunderscape Master, able to drain or overrun as he saw fit.

At the far end, Clegg had taken the second game, thanks to a mana-light draw on Edwards's part. He wasn't able to match Clegg card-for-card, and so Clegg was busting through damage on each attack phase. Urza's Rage finished him off.

Crosby's draw was fabulous for his game three. Twin air bears sat next to forest and island. He had no problem with Lan's mulliganing. Lan chose to keep his six-card, one-land hand, and was unsurprised when things failed to go his way.

Ken Ho's Flametongue Kavu was the final piece of the puzzle in his bid to take the second game. With the Master removed from the equation, he put Wings of Hope on his kicked Lancer and sent for eight. Bloodfire Infusion was not the answer Ranks needed.

And so it all came down to the last game of the Edwards-Clegg match. Edwards had everything in his favor. He had Plague Spitter and Smoldering Tar whittling Clegg's life total, while Clegg was stuck for early plays. He just matched Clegg play for play, and let the Tar do the rest.

Final Result: The Fellowship of the Ting defeats The Ken Ho All-Stars 2-1