Round 3: Florent Jeudon vs. Ben Ronaldson 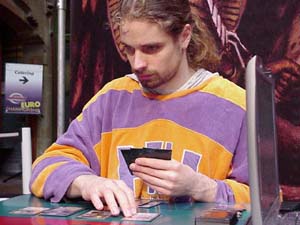 They are not only two "household" names in European Magic, above all they are known for being two of nicest and politest players in Europe. Florent is mostly known for being a member of Black Ops (along with the Ruel brothers) but is also a very strong Limited player on his own.

Ronaldson isn't primarily known for his Limited skills, but that is mostly due to the fact that he is one of the most known members of perhaps the best Constructed team in Magic: Godzilla. That can easily overshadow a few other things, Magic-wise.

Ben came out with Benevolent Bodyguard followed by Cabal Torturer while Jeudon played Werebear (obviously before the Torturer showed up) and Think Tank.

The Torturer ate the Werebear and the Englishman seemed in perfect control of the table when he played a Hallowed Healer. But Florent had the answer to get back into the game: Sickening Dreams for one.

The man in the purple-orange shirt bounced right back with Commander Eesha and Last Rites for one taking Afflict over Toxic Stench. With his Think Tank still churning on Jeudon kept finding land after land.

Ronaldson played a second Cabal Torturer and Jeudon could only find a Crypt Creeper. When a Mesmeric Fiend tried to get rid of the Toxic Stench Jeudon saw through it: he sacrificed his Creeper to reach Threshold and Stenched away the Commander.

The replacement came quickly in the shape of Soul Scourger followed by Zombie Assassin. Still mana flooded, despite the Think Tank, Jeudon found Basking Rootwalla to hold up the ground.

While things on the ground were tense, but quiet, the Scourger soared high above taking the Frenchman's life down in uncontested swings. A few turns later, still finding land after land Florent conceded, revealing his hand full of lands.

That happened to be Cephalid Aristocrat, which was bigger than Ronaldon's creatures. So the Englishman was forced to sit back and play extra creatures. Florent played Battlefield Scrounger and a second Aristocrat to totally seal the table. 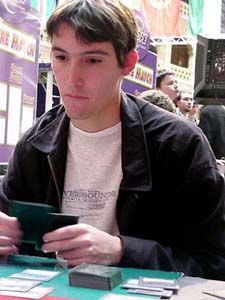 Having seized control of the table Jeudon tried to get his Execute back by using Patriarch's Desire on the Fiend but Ronaldson saved it with his Bodyguard. When the Florent felt brave enough to swing with everyone Ronaldson looked at his Advocate.

Ben: "Do you think I should try to deck you?"
Florent: "You could try."

He ended up choosing the Scrounger. They took a few turns piling creatures until Ronaldson played a second Fiend and Jeudon answered by Toxic Stenching away Healer. Despite the departure of the troublesome Healer the table was in a very tight gridlock.

Finally Ben found a way out of it: Soul Scourger. Again a flyer was making Florent Jeudon's life miserable. He tried to find answers with a full Breakthrough but apart from Think Tank all he got was lands.

The Englishman played Restless Dreams for one, getting back the Bodyguard and reaching Threshold, before sending in everyone for the kill.

Ben: "Moment's Peace would have killed me right now."