Round 3: Frank Gilson vs. Peter Szigeti

Frank Gilson was a member of the famed Pacific Coast Legends back in the day, and was considered one of the best deckbuilders in the world. He slowly fell off the radar like most of the team, but came back in recent years. Yesterday he grinded into Nationals through a Limited grinder. His opponent, Peter Szigeti, has taken the mantle of Magic's villain, and ran with it for all it's worth. To his credit, Szigeti has recently written some very entertaining articles for TOGIT's website. An interesting aspect of this match is that it features the cliché of the old veteran against the "young punk"- both from California. 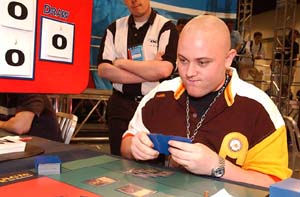 Szigeti had a second turn Nantuko Shade, and Gilson played Withered Wretch. Szigeti summoned Rotlung Reanimator. Gilson's Duress got a Duress, and Szigeti attacked with his team- the Wretch blocked the Reanimator, forcing a trade.

Gilson seemed a little thrown off by the fact that he didn't understand the card properly. Szigeti continued to build his side with Graveborn Muse, and Gilson cleared everything with Mutilate. Szigeti came right back with two Withered Wretches, one of which died to Smother. A Rotlung gave Szigeti another threat to work with and Corrupt killed it, giving Gilson seven life and Szigeti a 2/2 token. Szigeti attacked for four damage a turn, and eventually brought out Visara.

Szigeti- "Hey Mark, if I win Nationals, I'm going to turn the trophy into a crown. My mom can help me figure something out, she made this (the plaque necklace)." 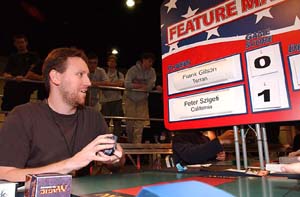 Gilson played a first turn Cabal Therapy, naming Rotlung Reanimator. He saw two swamps, Unholy Grotto, double Corrupt, Cabal Therapy and Nantuko Shade. Szigeti's Mesmeric Fiend took Smother, leaving Gilson with an unimpressive hand containing lands and Shambling Swarm. The Swarm went away thanks to Cabal Therapy, and just when things seemed hopeless, Gilson drew Smother. It killed the Fiend to get back the other Smother, which killed the Shade. Gilson untapped and played Rotlung Reanimator, sacrificing it to flash back Cabal Therapy and take the two Corrupts out of Szigeti's hand. This left him with a 2/2 Zombie token, which Szigeti killed with Smother.