Round 3: Frank Karsten vs. Tsuyoshi Fujita: Deck Masters at Work 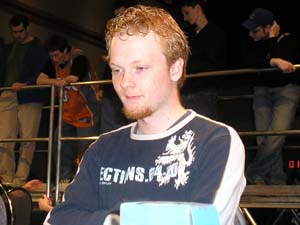 Could Frank Karsten summon up another killer Block Constructed build?

Frank Karsten and Tsuyoshi Fujita have been central figures on the Magic Constructed scene for the past year and were both candidates for the Invitational on the Resident Genius ballot. Frank Karsten is the man most associated with Aether Vial in Affinity decks after his Top 8 appearance at Grand Prix-Zurich.

Frank's post-Skullclamp build in Block Constructed showed the world the power of the Vial and the deck was widely known as Karsten-Affinity. Frank was playing White Weenie for this tournament. He is a member of the TOGIT-Dutch alliance and, according to Osyp, was central to the team's testing process. Despite the team's claims of putting an end to Japanese dominance on the Pro Tour, Frank did not seem enthused by this round's pairing against Tsuyoshi Fujita. "I lost round one against another Japanese in the feature match area."

While Frank gets credit for Vial Affinity, Tsuyoshi Fujita apparently built everything else over the past couple of years. Starting with Goblin Bidding and up through his Sneaky-Go deck from Grand Prix-Seattle, Tsuyoshi's creations earned him a trip to E3 as the Resident Genius. Tsuyoshi was playing a deck of his own design with redundant legends (4 Keiga, 4 Godo, 4 Meloku, etc.) and Honor-Worn Shaku to power them out a turn or two ahead of schedule.

Turn-one Isamura, Hound of Konda followed by Umezawa's Jitte was the opening couple of turns for Karsten. Fujita's first play was Honor-Worn Shaku. Karsten beat in for two more and added a Lantern Kami to the mix. 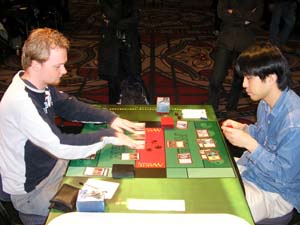 Karsten and Fujita were putting huge creatures in play all match long.

Fujita summoned a turn-four Meloku. He could actually make a token if need be thanks to the paddle. Karsten took down Meloku with an attack and four counters from the Jitte. He then added Samurai of the Pale Curtain and Eight-and-a-Half Tails. Fujita untapped into Godo for Jitte - think of the Bandit Lord as a six- mana Viridian Shaman in this format. Karsten attacked with everything and Godo ate the legend. Karsten just played another 8.5 Tails to replace it - he had Fujita down to 9.

Fujita summoned Keiga and passed with two legends acting as offensive linemen for their quarterback. Karsten chose to bide his time and simply played Tallowisp and passed the turn. Fujita played Sakura-Tribe Elder and did the same.

Both players rattled their sabers at each other across the red zone but neither one attacked until finally Karsten tapped out to make the two legends white and swing in with his two legends. Fujita took advantage of that window for what could be the highlight play of his tournament. Fujita tapped his legends to untap his Honor-Worn Shaku, generating the mana to Reweave the Samurai of the Pale Curtain. The Samurai was interfering with the dragon-y goodness of Tsuyoshi's hand.

Karsten could scarcely believe it when the Reweave put another Eight-and-a-Half Tails into play and he lost them both. Fujita chumped the Hound with Elder and put a land into play with his Elder now that the Samurai was gone.

Fujita summoned Jugan and began using his legends to paddle his mana into a second Keiga - stealing Tallowisp and Lantern Kami. Karsten was still shaking his head as he untapped to play yet another Eight-and-a-Half Tails. "I had it in my hand," he marveled at Fujita's uncanny aim with the Reweave. "What are the odds that would happen?"

Karsten led off with a Hound and 8.5 Tails, which prompted a sideboarded Glacial Ray for the fox legend. Karsten beat in for two and played another 8.5 Tails and Lantern Kami. Fujita cast Kodama's Reach and fell to 11. He untapped and played Meloku.

Meloku stepped in the path of 8.5 Tails but Karsten prevented the damage with Eiganjo Castle. Godo fetched up a Jitte for Fujita and he passed it back with a pair of legends minding the store. Karsten disenchanted the artifact with his own piece of Umezawa's hardware.

Fujita had only Sakura-Tribe Elder while Karsten summoned Hikari, Twilight Guardian. Fujita made a token end-of-turn and untapped into another Jitte and sent it toward the red zone. Karsten had no blocks and Fujita removed the tokens to kill 8.5 Tales. Hikari munched a token next turn. Samurai of the Pale Curtain joined the squad.

Meloku wielded the Jitte and it went into combat alongside the token. Karsten blocked with Lantern Kami and saved it with Blessed Breath. Fujita moved the Jitte to the Bandit Warlord's capable hands. Karsten attacked with everyone save his Hound, Godo traded with Pale Curtain, and a token blocked the flier. Karsten made another Samurai. 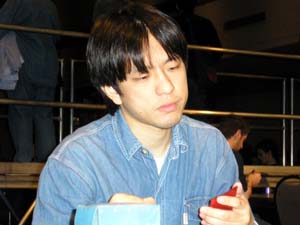 Fujita defended his reputation as an expert deckbuilder.

Fujita got up to four counters on his Jitte with another crack from the lone token. Karsten sent everyone in and Fujita blocked everyone and took down the Samurai with Jitte so he could activate his Tribe Elder. Karsten played 8.5 Tales and Fujita took out the Hound in response.

Fujita kept piling up the Jitte counters and dug up Konda's Banner with a new Godo. He left everyone back; his doubly equipped Meloku, Godo, and the now 2/2 spirit token. Karsten summoned the Hound and passed the turn. Fujita untapped and passed it back. Karsten had nothing and when he passed, Fujita picked up all of his lands and made an air force that was more than Karsten could deal with.

Karsten could have bought himself one turn by making Meloku white with 8.5 Tails but he had no outs in his deck against such an overwhelming board. He took his second loss of the tournament, pushing him two-thirds of the way toward elimination.