? These guys don't make enough money without sponsorship deals? Frank Karsten was playing with the Ruel brothers as tcgplayer.com while the team of Wessel Oomens, Rogier Maaten, and Julien Nuijten - despite their nationalistic orange football jerseys - chose to play as manamaze.com for this weekend.

In the first two rounds there had been a little tinge of electricity in the air before each match as the players on either side of the red zone tried to sniff out what decks they were facing. There was no mystery here as the two teams were running identical stacks of 225 cards. Wessel and Olivier were both packing a crazy five-color beatdown deck while Julien and Frank were playing the same green-blue-black-white good stuff decks. The biggest difference was in where they chose to place their decks. 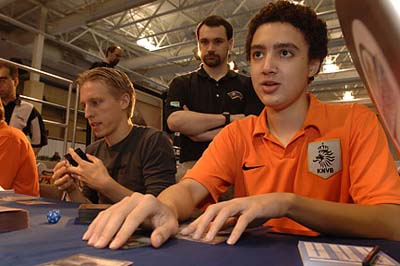 Julien inches his attacker into the red zone.

Wessel was playing Frank Karsten at the far end of the feature match table while Julien and Oli were engaged in the same match on the near end. That left Antoine and Rogier in a 75-card mirror match. The deck? Critical Mass - or at least a Simic deck bearing more than a passing resemblance to the Standard staple.

I settled in to watch the match-up between the former World Champion and last year's runner up in the Player of the Year race.

These two teams had played this match out many times and Olivier knew that his best hope for getting the matchup to as good as 50-50 involved winning the die roll. He put his best game face on when Julien rolled an 18 but the best he could muster was a 2.

"You are so lucky," clucked Oli. "Luckier than me. I can't believe it."

"Mulligan," was the response from Julien in a tone that made it clear he wanted to hear no more about which of them was luckier - all in good humor of course.

"Ah…well," grinned Oli who saw a glimmer of hope.

Oli made the game's first play with a Pillar or the Paruns powered Watchwolf but it was quickly penned in by Carven Caryatid. Oli shrugged and summoned a Skyknight Legionnaire with "Piledriver" written on it, used previously in playtesting another format.

Julien had no other plays save developing his mana base and passed the turn bracing for another hasty flier, "Not another Piledriver?"

Oli did not have any additional pressure to exert. Julien looked at his hand - keep in mind here that he has no red mana - and did some math. "You're at 20?" asked Julien. "Yup, you are dead."

Shockingly enough he was right. Loxodon Hierarch brought Julien up to 20 and he played Simic Sky Swallower.

Olivier scooped. They had played the match out countless times in testing, and with Julien sitting at 20, Oli did not need to waste either player's time.

"The same game...if I play first?" Olivier explained that he would have probably played it out. "He is probably at 8 there."

Julien was not so sure but jokingly offered a solution. "Rewind? In playtesting we would rewind games and let the other player go first." It was not practical given the time pressure they were under to finish the match, but it seems like an amazing playtest tool.

Oli was confident he could take the match to the full three but had no false hope about how it would ultimately play out. "I can probably win Game 2 but he is a huge favorite in Game 3."

The loss actually seemed to take the wind out of Oli's sails and he audibly sighed when he learned that Frank had also dropped his first game. Antoine and Rogier were still embroiled in a long Game 1 featuring Cytoplasms, Root-Kins, and Simic Guildmage.

Julien assured me that Rogier and Antoine would still be playing when everything else had come to a conclusion. "This match is going to take the longest. It is such a difficult matchup."

Becker came over with an update on the World Cup match that was taking place between the Netherlands and Ivory Coast: "Nothing-nothing with 17 minutes."

He then slumped again when Julien reminded him that they had two games to play, and of the team Oli actually cared about. "Nice French team by the way. Let's do this, Oli."

As you might imagine these two teams are all good friends - the French and Dutch borders have become quite blurry when it comes to Magic - and they started kidding around about ways to get each other in trouble with the judges.

Early in the round when Pro Tour photographer extraordinaire Craig Gibson was snapping the pics for this very feature match, Craig's arm sent Oli's sideboard tumbling to the floor.

"You didn't look at your sideboard on turn two when it got knocked over?" leered Julien.

"You could have had Wessel check it."

"C'mon," cried an exasperated Julien as he mulliganed for the second time in the match. "You are supposed to mulligan much more than me." 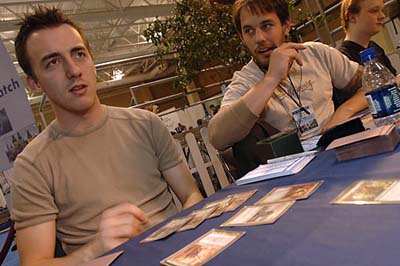 Antoine looks on as Olivier mulls his next move.

"And I am supposed to win the die roll."

There were no Pillars this game to smooth Oli's mana and he had to take two to make a Watchwolf followed up by the Gruul Guildmage. Loxodon Hierarch tried to stem the tide and Julien traded it for a pumped Guildmage. Julien had another elephant in his gun but Oli had the Mortify.

Julien also had Mortify and had to use it on Blind Hunter, which haunted a Civic Wayfinder that had Lightning Helix written all over it. Skyknight Legionnaire started pecking away and Julien started making suggestions to the top of his deck.

"Time for the Swallower."

He found a land.

"Time for the Swallower."

Another land and he decided he was being too choosy.

"Oh c'mon!" Julien slammed his initial seven back down on top of the deck. He kept the next six featuring four lands and two Caryatids. The first one came down in the wake of a turn-two Watchwolf. "Hit it?" asked Julien.

Oli only had the Legionnaire and went to work. He had to start over when Julien played the elephant and doubled up on his fliers. Oli was holding 11 points of burn but was racing against the 4/4 pachyderm. He had to decide if he wanted to take two from a shockland in order to leave Helix online but he could not afford it.

While Julien dug through his deck with Compulsive Research, Becker came back over and let the orange shirts know that the Netherlands was up 2-0.

"Yes!" whooped Oomens who pretended he was packing up his board. "That is okay. I scoop."

Oli's next attack dropped Julien to 12 - just out of burn range - while he had dropped to 10 from the Hierarch hits.

Julien offered up Skeletal Vampire. Oli had to decide whether he wanted to hold his burn or aim it at the Vampire with the token effect on the stack - essentially making it a six-mana Chatter of the Squirrel. He decided to let it resolve and hope for the best off the top. He did seven EOT to Julien and clasped his hands together hoping for that final point of burn.

He drew Hit//Run and thought that was the answer to his pleas. Oli tipped his hand and thought he was going to kill him with the remaining Char and split card but realized that Julien could just sac a token and lose no additional life. Instead he just had to say "go" to Julien, who now had knowledge of the French player's hand.

Rogier tied up his match in the middle with a Gather Courage after Antoine blocked to stay alive.

Julien thought for awhile before killing both fliers that Oli was holding back and attacked with everyone. Hit//Run kept Oli from dipping to the 2 life that would negate the Char in hand. 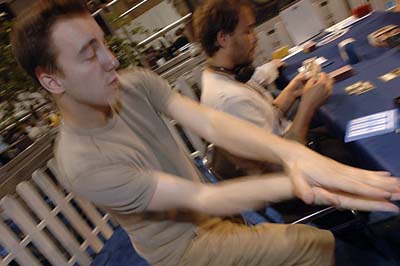 Oli prepares his windmill slam of…

"Where is Craig Jones?" asked Oli as he reached for the top card.

Julien was having a great time. He stood up, kicking the chair back and urged Oli on the way Oli had done in Hawaii to Craig Jones. "Slam it! Slam it!"

Julien actually looked a bit disappointed to see Godless Shrine and sniffed at his opponent, "You are no Craig Jones." Frank and Wessel's match played out the same way for the archetypes - although without the dramatic Hawaii reenactment.

All that was left was the 75-card mirror between Rogier and Antoine that was just getting underway in Game 3. Antoine was beating down with a Moldervine Cloaked Frogling by turn three. He only had two lands though and was working his Bird overtime - playing Simic Guildmage. Rogier was hiding behind Vinelasher Kudzu and Gristleback - with Cytoshape mana showing.

Antoine cracked with his Frogling and Guildmage. Both teams huddled to discuss what cards the other player could be facing. Eventually Rogier nudged his 3/3 Kudzu in the path of the Guildmage. Gather Courage happened on each side and Antoine lost the battle. Still languishing on three mana, he played Dryad Sophisticate.

Rogier conjured up a Cytoplast Manipulator but it was not clear if she would have enough time to become a factor, especially with a Frogling on the table. The only thing Rogier had going for him was the lack of mana on Antoine's side.

Finally a third land arrived for Antoine. He played Simic Guildmage pre-fighting and attacked with his Cloaked Frog and land-walker. Rogier had to send the Kudzu into the oncoming traffic.

Moldervine Cloak on the Manipulator did not offer any real solution to the Sophisticate. Antoine was able to make do with his skimpy supply of lands and pull out the deciding game of the match.