was a match between racers with an outside chance. Wesimo Al-Bacha from Germany figured prominently in the Rookie of the Year Race earlier this year. His 18 points are not much, but he is still sixth on the list, and the Worlds title would put him on top with a close margin. Likewise, with 35 points, Tomohiro has the slightest chance of becoming the Player of the Year if he wins the tournament (and Shouta Yasooka or Shuuhei Nakamura don't gain more than two points).

Both players can also reach the next level in the Players Club this week. Wesimo has Level 3 nailed down by attending the event, and Tomohiro needs just another 5 points to reach the 40 point threshold and secure his Level 5 for the season. 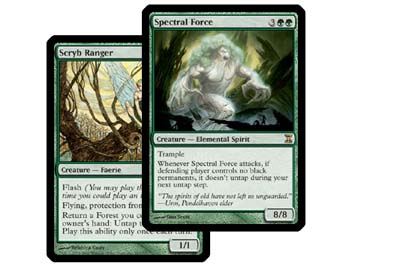 Wesimo came to the table with a Scrub & Force build, relying on Scryb Rangers and Spectral Forces with Moldervine Cloaks and Stonewood Invocations pushing his guys through. Tomohiro brought a red-black-white deck, with the plan to secure the board with Wrath of God, Lightning Helix, and Condemn. His finishers are Greater Gargadon and Sedge Slivers.

The game started off as a veritable avalanche of dual lands on Tomohiro's side. Three Blood Crypts, a Godless Shrine, and Flagstones of Trokair powered a Wrath to kill Wesimo's first offense, Scryb Ranger and Bird of Paradise. Then Tomohiro followed up with Sedge Sliver, a good defender and well-endowed attacker against Wesimo's blue-green aggro-control strategy.

Wesimo rebuilt with Birds of Paradise and Moldervine Cloak, but Tomohiro had the Hide // Seek to get rid of recursive enchantment. A second Sedge Sliver on the Japanese side as well as Phyrexian Arena seemed to all but seal the deal. Though the life totals were 16 to 9 in Wesimo's favor, his Scryb Ranger and Plaxmanta (shot out in response to a Castigate) were no match for the now three Sedge Slivers Tomohiro had summoned.

Wesimo went to six, drew his card and laid down Ohran Viper, hoping to hold off the Sliver army to let Tomohiro kill himself with Phyrexian Arena - a futile hope against the clever Japanese player, who busted out Loxodon Warhammer.

Confidently, Wesimo announced to keep, and Tomohiro followed suit. But again, Wesimo's first offense, in the guise of a Scryb Ranger, met an early death: Lightning Helix shot down the little bird. Undeterred, Wesimo Called up a Herd of one Elephant, blundering lonely across the play area. Tomohiro set up an impressive late game by suspending Greater Gargadon and going for Phyrexian Arena, then threw Chromatic Star to his Hungry Hungry Gargadon. He drew Sedge Sliver off it, something that the Star's spherical ancestor couldn't have achieved.

Wesimo's deck has no maindeck answer for the Sliver, except for the Remand he had. Wesimo had to push through as much damage as he could before the Gargadon would come smashing. Moldervine Cloak on a Bird, an Elephant attack, and a Mana Leak for Tomohiro's Condemn looked good for the German. After taking Tomohiro to 9, the German was on the receiving end of a calmly cast Wrath of God.

With six counters left on the Gargadon, Phyrexian Arena picking away at his life, and Wesimo flashbacking the Elephant, Tomohiro was on defense. What could he put out there? Condemn was one good answer, and Phyrexian Totem provided an emergency blocker.

Stonewood Invocation on Elephant allowed Wesimo to stave off the Condemn. Even though Tomohiro gained some three life through Helix on Scryb Ranger, he fell to a lowly 2. Death from Arena seemed possible, so Tomohiro had to resort to desperate measures: He activated the Phyrexian Totem, attacked, and Condemned his own creature just to gain five life, back up to 6.

But without blockers, Tomohiro's hand was forced. Wesimo cloaked up a new Scryb Ranger and attached with that and the Elephant. Five counters had to come off the Gargadon to provide a blocker for Tomohiro. The big sacrifice left him with Arena, the 9/7 monster, and two lands - and just one life. Oh, how Wesimo must have wished for some burn spell in his deck!

Even a chump blocker would have been good, but it didn't come. Sedge Sliver and Greater Gargadon attacked unhindered, and Tomohiro finished the German in true Craig Jones style - with Lighting Helix off the top.