Round 3: Gary Wise vs. Jason The 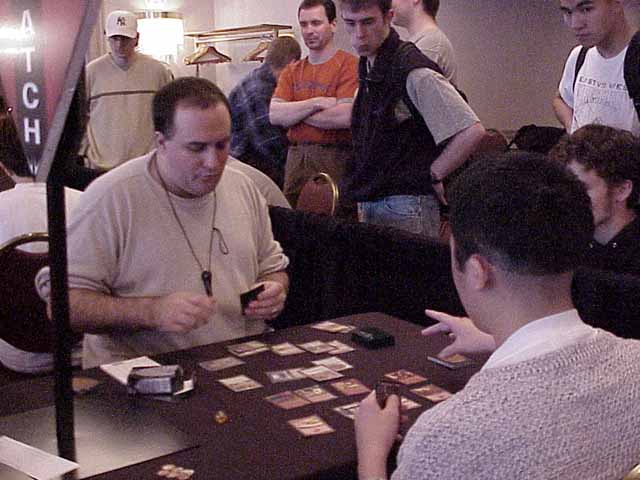 Gary Wise sat down for the third round still complaining about how lucky his last opponent had been. Wise was paired against Jason The for round 3 and neither player wanted to pick up a second loss this early in the tournament. Wise drafted a black/white deck that you can read more about if you click here. The drafted a stereotypical, yet solid, red/green deck.

Wise spent the early part of the first game pretending to be color-screwed in order to mask a weak draw. All he had was a Task Force, an irrelevant Seal of Cleansing, and an Undertaker that he couldn't cast because The had Kris Mage in play. The played Kris Mage, third turn Kyren Sniper, and then fifth turn Flowstone Crusher. The Crusher was a pretty fast clock and Wise was forced to play out both the Undertaker and a Defiant Falcon so he could try to outrun Kris Mage and accomplish something with his 1-toughness creatures. The killed the Falcon and added Spur Grappler to his offense.

Wise did draw Snuff Out off the top of his deck. He chose to pay four life (putting him at 7) and Snuff Out the Kris Mage. That left his lone swamp free to so Wise could return Defiant Falcon to his hand with Undertaker then play the Falcon. The used Rhystic Lightning to remove one of Wise's chump blockers and that was all it took to finish Wise off.

The second game was even uglier. At first, things looked good for Wise -- his opening hand included Steadfast Guard, Defiant Falcon, and Mageta, the Lion. Meanwhile, The mulliganed down to 6 cards. However, Wise's draw did have one flaw: he only had two land. Wise stopped playing land when he had three plains in play and never drew another land. Could The punish him? Yes - The played fourth turn Blastoderm and fifth turn Woodripper. Wise needed to get enough mana to play Mageta in a hurry, but he couldn't do it. 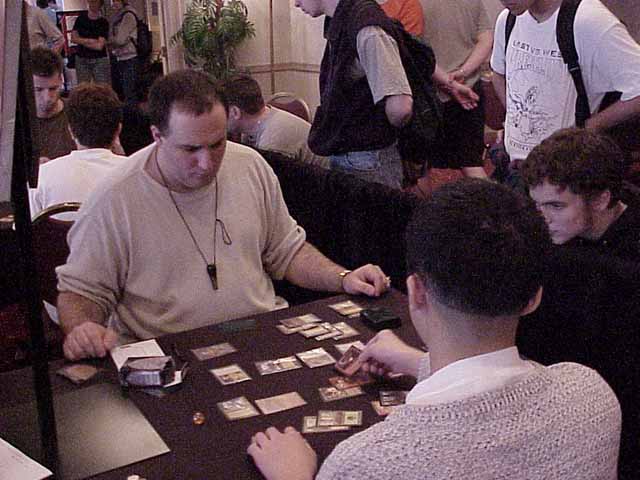 "My deck doesn't like me" was all Wise could say. He'd better hope his Standard deck likes him because he'll need a solid Saturday if he wants to make his first Canadian national team. First he's got to make sure nothing too random happens at his 1-2 table.