Round 3: Gary Wise vs. Neil Reeves 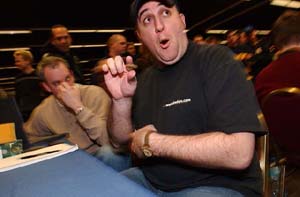 Courtney's Boys went head to head in the third round of the Chicago Masters—Gary Wise, sporting the unexpected Beasts deck took on Neil Reeves, who was running Psychatog. Representing team namesake Courtney Maher at the table was her father-in-law, Robert Sr.

Mr. Maher asked that the match be played as a single game in the interest of time, but the competitors had other ideas, and decided to do it the old-fashioned way, best 2 of 3.

Reeves started out by joking that the Beast deck that he plays in the casual room on Magic Online is better than Gary's Masters deck. The conversation got worse for Wise when Reeves told him they were ditching him for Dave Williams for the next Team PT regardless of how they do in the Venice Masters. A tough beat.

Wise did have to mulligan his hand of six lands and an Elf, but had a first-turn Elf regardless. Reeves answered with Innocent Blood.

The rest of the game wasn't pretty. Wise's Ravenous Baloth was Countered, and his Glory was hit with Circular Logic. After that, he drew about seven lands in a row, while Reeves ha put out two Psychatogs and a Compulsion.

Wise, clearly losing the game, tried to start in with some friendly trash-talk, prompting Reeves to threaten to smack him. Wise begged him to do so, saying it would result in a DQ.

Reeves: "If I slapped you, there isn't a single person here that would DQ me."

Gary drew two more Baloth's, both of which were countered, and he scooped when it was clear that Reeves could kill him.

Gary's threats were handled one-by-one by Reeves to start game 2. Wild Mongrel was killed by Chainer's Edict, face-down Exalted Angel (which elicited a laugh from Reeves) was nailed with Ghastly Demise, Living Wish was countered, and two Beast Attack tokens fell to Innocent Blood and a second Demise.

Had the Wish resolved and Wise was able to get Genesis, things would have been a lot better for him. But for now, he was living off the top of his deck. The top of his deck gave him an Anurid Brushhopper, which Reeves had no immediate way to deal with. A flashed-back Edict made Wise empty his hand, but the Brushhopper lived on, and Wise now had a Glory in his graveyard.

The ¾ Beast got Reeves to 8 life before he could find another Edict, at which point the game turned around.

Gary had only drawn 7 spells total to this point in the game, and what was left of his library still had a bunch of unthreatening Birds and Elves in it. Reeves didn't make him wait long, casting Upheaval and Psychatog on the next turn, then playing an Island for Circular Logic backup.

And that was that.

Wise insisted that his claim that Courtney's Boys will beat Phoenix Foundation in Venice be included in the coverage, so here it is. We'll see if he eats his Wise Words.