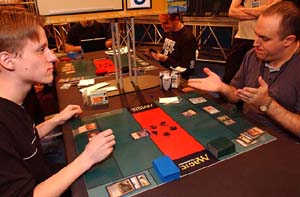 There is no middle ground for this round of feature matches. While they are only a few feet apart Gary and Victor sit impossibly far away from the 2-0 matches at 0-2. Before the match began, Gary and Victor exchange war stories. Victor lost a fight with a tree yesterday and bears a nasty gouge under his eye. Gary on the other hand is lamenting his last two matches.

Gary: "I haven't lost to a good card yet! I've lost to Auratog, Ancestral Mask...SONIC BURST!"

Gary: "If I lose this round I am going to drop and be Dirk Baberowski's shuffle caddy."

Victor is playing the Angry Hermit part 2 that has thus far been the talk of the tournament. The deck is capable of winning on turn 2 if it casts a first turn Hermit Druid. Once the druid is turned on it can only find a lone Mountain. With almost the entire deck in the graveyard—including Anger—Victor can Reanimate or Exhume a Sutured Ghoul removing a whole horde of fatties when it comes into play giving it upward of 20 points of power and toughness—with haste and trample!

Gary is playing a Reanimator deck virtually identical to the one piloted by Kai Budde (it was showcased in a round-one feature match vs. Jon Finkel).

Gary: "I don't know my deck very well. I figured I would lose to seasoned Pros with a more fundamental understanding of their deck and the metagamed. Instead I lost to Ancestral Mask!"

Victor attempted to be consoling: "At least it has the word Ancestral on it."

Victor was conspicuously silent as they began. Gary was playing first and elected to keep his hand of triple Polluted Delta, another land, Duress, Brainstorm, and Exhume. Victor was unhappy with his openers and went fishing for six new cards.

Victor: "I can only kill on turn 2 so I had better mulligan."

Gary wondered aloud about whether or not he could still get combo'd out on turn two: "Land, land, Diamond, Hermit... I'm still going to die!"

Victor: "I'm pretty sure that R&D never envisioned Sutured Ghoul as the key card in a combo deck."

Victor ended up going down to four cards but remained in pretty good spirits despite his tremendous disadvantage: "I'm down to turn 3 but I will need to top deck." 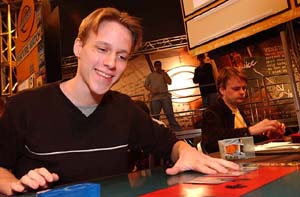 Gary opened up with a Polluted Delta and promptly cracked it for a Swamp and cast Duress. He saw three lands—including the nose wrinkling Forsaken City—and a Krosan Reclamation. He could only take the green flashback card. Victor ripped a Mox Diamond off of the top of his deck and showed off his deck's most efficient use of Forsaken City when he discarded it to play the artifact. He played Bloodstained Mire, which found his lone Mountain and sent the turn back to Gary who stopped for a moment to read the Krosan Reclamation.

Gary: "That's really annoying. I always played black in OBC so it never really came up before."

He played another Polluted Delta and passed the turn. Victor played a City of Brass and Gary had a number of effects during his EOT. He broke his second Delta to get an Island and cast Brainstorm putting two lands on the top of his deck. He then used Vampiric Tutor to get a Memory Lapse and shuffle away the extraneous lands.

Gary played his third land—an Underground River and cast Mesmeric Fiend. Victor responded with an Entomb putting Anger into his yard. He had zero cards in hand when Gary's 1/1 beatstick resolved. Victor drew a card and prepared for the Mesmeric Fiend beats. Gary swung and played another Fiend, which found an Exhume. Victor drew a card and passed back to Gary. Gary sent in his growing army of 1/1's and played his third Mesmeric Fiend. Victor Tutored in response and all Gary could do was look at Bloodstained Mire.

Here is where my account and Gary's account of events differ. Victor played the Bloodstained Mire—giving him four mana on hand once he cracked it—and a Hermit Druid. The turn was passed and Gary sent all three Mesmeric Fiends into the red zone. According to my rather copious notes Gary did nothing with his mana that turn and sent it over to Victor with a Memory Lapse in hand. Gary claims he must have used the mana in some way on his turn but I have no notes of him doing this.

Victor untapped and activated his Hermit Druid—using one of his four mana available—which would not be able to find a basic land since the only one in the deck was already in play. Rather than go through the motions he allowed Gary to look through his deck before he just flipped it into the bin. Victor's plan was to use Krosan Reclamation—leaving him one mana remaining—to put a Reanimate into his deck, draw it and make a gi-normous Sutured Ghoul with haste. If Gary Lapses the Reclamation, Victor would not be able to draw a card and Gary would win.

When Gary said: "I just lost to a triple mulligan," I assumed it was just showmanship but I was surprised when he started reaching for his sideboard and Victor got the W. It looked to me like Gary had the first game locked up and missed the play. To be fair to Gary, he insists that he either did not have the mana available or had somehow shuffled or discarded the Memory Lapse although he could not remember for certain which.

Gary was playing first and kept his openers, while Victor went to France for the fourth time in two games.

Victor kept his next six and Gary opened up with a Polluted Delta. Victor opened with Mox Diamond, discarding Forsaken City, and played a Tarnished Citadel.

Gary cracked the Delta for a Swamp and Tutored for an Island. On his turn Gary cast Duress and Victor tapped the Mox Diamond to Entomb a Hermit Druid and then tapped the Citadel to take FIVE and Vampiric Tutor for Defense Grid. Gary got to have his choice of the two Exhumes that were left in Victor's hand. On his next turn Victor Exhumed the Hermit Druid. 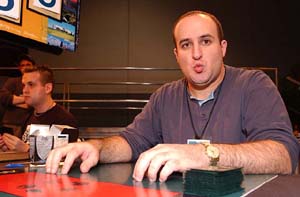 Gary cast another Duress and was able to nab the Defense Grid and play another Delta. Victor swung for one with the Druid and played a Llanowar Wastes. During his EOT, Gary used Brainstorm to look at some new cards and shuffle a Wonder and a Gilded Drake back into his deck when he cracked the Delta. On his turn he cast Careful Study and discarded Entomb and Reanimate with another copy of each remaining to put a Verdant Force into play.

Had Victor not attacked he probably could have activated the Druid EOT and won when he untapped. He would need four mana on his turn to activate the Druid on upkeep and win but he only had three—he would have to get lucky...

He drew an Exhume. He activated the Hermit Druid. If he hit the Mountain in his deck before he reached a critical mass of Anger, Sutured Ghoul and enough fatties to trample over the Verdant Force he would probably lose...