Gadiel Szleifer, Pro Tour–Philadelphia 2005 champion and three-time Grand Prix Top 8 competitor, has a penchant for diving into new formats directly at the PT level—the only previous experience he has with cards from Shards of Alara block is the few drafts he’s been able to do. Still, this fact does not seem to faze him, as he is quite capable of excelling in any format, even coming in blind. 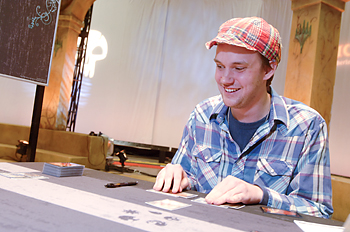 Jacob Van Lunen is well-known as one half of the Sliver Kids from his incredible Two-Headed Giant performance at Pro Tour–San Diego with his teammate Chris Lachmann. However, he is probably even more well known as magicthegathering.com‘s Building on a Budget author.

Van Lunen quickly remarked on the auspiciousness of this feature match: it’s his first since the last time the Pro Tour visited Asia, in Kuala Lumpur. He reached into his bag and took out his “lucky hat” and smiled. “You know where I got this hat?” he asked with a smile. "The 70s."

Both competitors sat at 1-1 and shuffled up while searching the Arena for dice or other counters. Eventually they settled on the copious amounts of change in their pockets.

“I’ll call it in the air,” Van Lunen replied, then, as the coin flew over the table, exclaimed, “Flower! Flower! Obv obv obv.”

Van Lunen started with virtual one-drop Windbrisk Heights, which Szleifer matched with a tapped Secluded Glen. The two Americans were off to the races in what many consider to be the definitive matchup of this format: Faeries versus Red-White, in this case a modified Kithkin list designed to pummel the more controlling decks in the room.

Van Lunen played a Wizened Cenn on the next turn, but when the Cenn attacked into Szleifer’s two untapped lands, it ran in Terror straight to the bin. Van Lunen calmly replaced the Cenn with a second. Szleifer, in true Faerie form, passed the turn back after drawing his card and quickly Broke Van Lunen’s Ambitions when he attempted Ajani Goldmane. The clash revealed a second Goldmane, which Van Lunen bottomed, but showed Szleifer a badly needed Mutavault to allow him to increase pressure while keeping most of his mana open on subsequent turns.

Increase pressure is what Szleifer did, but not as one might expect. The second Cenn met a second Terror, and Szleifer quickly followed up by tapping down Van Lunen with an upkeep Mistbind Clique championing his lone Faerie, the activated Mutavault. Van Lunen accepted the Mana Short on a stick with stoicism. He tried to claw his way back into it with Glorious Anthem and Knight of Meadowgrain, but the Clique was relentless. Van Lunen dropped to 16, then 12, and then 6 when Scion of Oona joined the now 5/5 Clique in the skies.

Van Lunen finally entered the red zone with his now 3/3 lifelink Kithkin, restoring a bit of life to 9. Shortly joined by a 4/4 Figure of Destiny, Van Lunen’s team marched across the field with aid in the form of a reinforcing Rustic Clachan. His hope of regaining the life advantage crashed down as Szleifer sealed the game up with his third and final Terror, on the Knight, and cracked back with Team Faerie for the win.

“It probably didn’t like what you put under the Heights!” claimed an observer from the sidelines.

“I put the stone nuts under the Heights!” claimed Van Lunen, then frowned. “The problem was, I put gas on the bottom and drew all lands.” 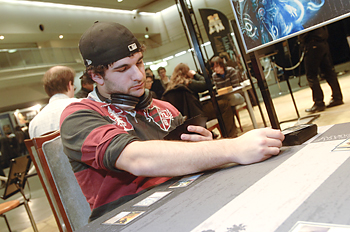 Gadiel Szleifer may not know what to play around, but he also may not need to.

Van Lunen’s start was much faster this time, leading off with the ubiquitous Figure and smashing in with it in 2/2 form the next turn, its Destiny already party fulfilled. Wizened Cenn joined Van Lunen’s side next, allowing 3 power of red-white Kithkin to bash right by Szleifer’s newly played Bitterblossom. This would, unfortunately, be the last time Figure of Destiny would get past the black Faerie enchantment.

When Jacob tried to upgrade his team yet further with Glorious Anthem, Gadiel had the Broken Ambitions to stop him in his tracks, revealing Cryptic Command off the clash. Faeries poured out of the Bitterblossom until Gadiel’s fourth turn, containing Figure of Destiny time after time. He finally made his move with a Mistbind Clique on Jacob’s upkeep. Jake considered and pumped the mana into a powerful 4/4 (5/5 with the Cenn), then he attacked into Gadiel’s last Faerie token.

Still, Szleifer controlled the skies, attacking Van Lunen down to 14 with Mistbind Clique before summoning another massive 4/4 to Mana Short Van Lunen again. This time, Szleifer championed his ground-bound Mutavault to keep up the aerial assault. Both Cliques attacked, tying up the game at 6 life apiece, but with Szleifer controlling two massive flyers to Van Lunen’s small team of Wizened Cenn and Figure of Destiny, the scales were anything but balanced.

Van Lunen attempted to salvage the game by sending both Kithkin into the fray, but Szleifer halted him to consider the Cryptic Command play to tap down Van Lunen’s creatures pre-attack. After a few moments of consideration, Szleifer nodded and allowed the attack, blocking Figure of Destiny with his Faerie token, a.k.a. Forcefield, and dropping to 3 on his upkeep.

With counter protection, multiple Cliques, and no instants forthcoming from the mana-light Van Lunen, Szleifer and his Cliques took it home.

“It’s tough, since I don’t really know the format,” Gadiel remarked, commenting specifically on his pause on the Cryptic Command play. “I don’t really know what to play around.” Gadiel read nearly every card his opponent played, since he was so unfamiliar with Standard coming into the event.

“Game 1, I didn’t have the Incinerate when you activated the Mutavault,” he said, shaking his head.

“Yeah, I definitely thought about instant burn,” Szleifer agreed, “but with my draw, I just had to go for it, you know.”

Van Lunen agreed, taking off his not-so-lucky hat with a bit of a scowl.