Round 3: Hisaya Tanaka vs. Kiyoshi Sasanuma

Hot off a Top 16 finish at Pro Tour – Chicago last weekend, Hisaya Tanaka is looking to add to his resumé at this Grand Prix. To that end he's brought that Ben Rubin and Brian Kibler special, "Oath of Beasts". His opponent, the less lettered Kiyoshi Sasanuma, is playing the Japanese classic that debuted at Houston: Draco Explosion.

The two matched manlands. Tanaka brought out Treetop Village and Sasanuma answered with Faerie Conclave. Tanaka followed up with Living Wish, and settled on Wasteland after considering Dust Bowl and Gigapede. He Wasted the Conclave on the following turn, while Sasanuma dug for land. He found Shivan Reef only to see Tanaka pull Dust Bowl. 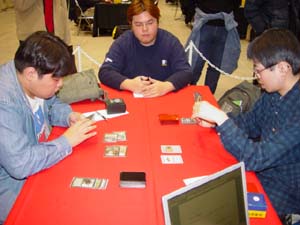 Two turns passed while Sasanuma went through Accumulated Knowledge and Brainstorm, trying to draw out of his predicament. Tanaka cycled Krosan Tusker to keep himself in land. He continued to hit with his Treetop Village. Finally Sasanuma started to hit basic lands. Tanaka Tutored up a Cabal Therapy, hoping to shut down a quick win. He aimed for Erratic Explosion and hit, but saw a hand of counters, Fact or Fiction, Draco and Intuition. He hit for three more and flashed back his Therapy, earning a Memory Lapse.

However, Sasanuma seemed to have enough gas to outrace three damage a turn. At the end of Tanaka's next turn he played Fact or Fiction, taking Scroll Rack over Counterspell and three lands. He dropped the Rack and passed it back. He fell to four. Intuition for Accumulated Knowledges gave him four more cards. He Racked for the full eight on his turn, drawing exactly what he needed: Two Fire/Ice and two Erratic Explosion. He Exploded Draco to put Tanaka at two. Tanaka made a Baloth and handed it back, but two Fires, appropriately stacked, gave Game 1 to Sasanuma.

Tanaka started things with a second-turn Duress. He saw an unexciting hand of Mystical Tutor, Brainstorm, and five lands, one of them a Polluted Delta. He took the Tutor. However, on his next turn he chose to play Call of the Herd rather than Choke. Sasanuma recycled his hand with Brainstorm and Polluted Delta. Now he had the tools he needed to get things going.

He counterspelled Tanaka's attempt to flash the Call back. Ice spared him some damage, but Tanaka resolved Yavimaya Elder. While fronting Counterspell with his islands, he set up Dust Bowl to get rid of Tanaka's Llanowar Wastes. Another hit brought him lower, but now he was free to Intuition for Accumulated Knowledge and cast it at end of turn. That meant he could Earthquake for three and leave a pair of islands up. He stood at three. Tanaka was at seventeen.

Tanaka tried Ravenous Baloth, but it fell to Mana Leak. Sasanuma punished him with Scroll Rack, threatening a quick win. He racked for four before handing it back. Tanaka was in a bind. He decided to risk it, ignoring the Krosan Reclamation in his hand in favor of Living Death, hoping that Sasanuma didn't have Draco sitting near the top of his library. Sasanuma Counterspelled, then Exploded for sixteen before turning on his Conclave for the final point.