Round 3: If It Wasn't For These Meddling Kids

"Is this were they'll show the Top 8?" asked famed deck designer Conley Woods, looking at the big auditorium the stage of which builds this weekend's feature match arena. He got the answer that this is indeed where the Top 8 games will take place, to which he replied: "OK, so I will be here."

He certainly was well on his way with a 2-0 start into the tournament, but so was his opponent, Marco Orsini-Jones. Orsini-Jones was running Ad Nauseam / Angel's Grace, while Woods came with a Bant deck of his very own.

Both players spent the first two turns on mana development: Woods had Glacial Fortress and turned Misty Rainforest into a Forest without the rain and mist, while Orsini-Jones was a little more busy with Vivid Creek and two Lotus Blooms, then Underground River and another Lotus Bloom. The real action started, however, on Woods's side with a turn-three Knight of the Reliquary, whereas Orsini-Jones was still preparing for his big turn with Coalition Relic. 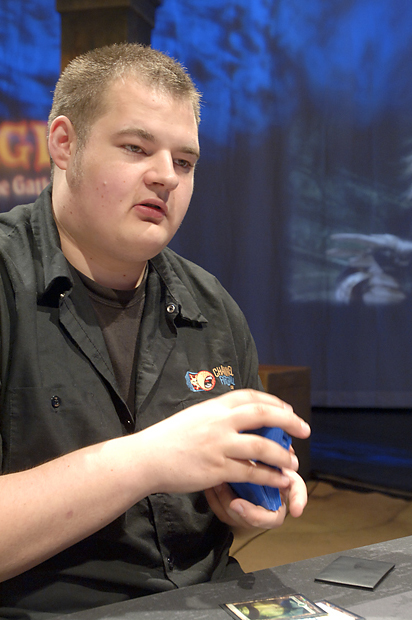 Conley Woods loves his home brews; rumor has it he built his deck just last night.

Woods passed his next turn without an attack and without any play except for another land, signalling some form of counterMagic in his hand. The first two Lotuses bloomed, without Woods interfering. When Orsini-Jones failed to cast anything interesting, Woods just returned Orsini-Jones's Coalition Relic to his hand via Cryptic Command.

The Knight attacked for 4, and it was again back to Orsini-Jones, who cast his third Lotus Bloom and recast Coalition Relic.

"I don't think I have any problem with you having lots of mana," Woods said, then thought a bit and added, "Well, actually I do, I just don't have anything I can do about that."

Instead he chose to take the fight to a different level and cast Meddling Mage. Orsini-Jones responded with Pact of Negation, but Woods responded with Bant Charm. The Mage resolved and Woods named Ad Nauseam.

"Casting it?" Woods asked, and raised an eyebrow.

Path to Exile removed the blocker, before Meddling Mage and Knight of the Reliquary charged in to put Orsini-Jones at 5 life. In the meantime, Woods's Jace, the Mind Sculptor met Pact of Negation. Orsini-Jones payed for the Pact, played a land, and passed the turn right back to Woods.

His attack put Orsini-Jones at 1, thanks to his Angel's Grace. Woods cast another Jace, the Mind Sculptor and this time it resolved. He checked the top card of Orsini-Jones library, left it in place, and Orsini-Jones quickly shuffled it up, when he saw what that was.

Orsini-Jones was unhappy with his opening seven. He took quite some time to decide before finally keeping. Woods was quicker with his hand and almost instantly mulliganed his seven. His response to his six cards was equally quick—and emphatic: "Keep." 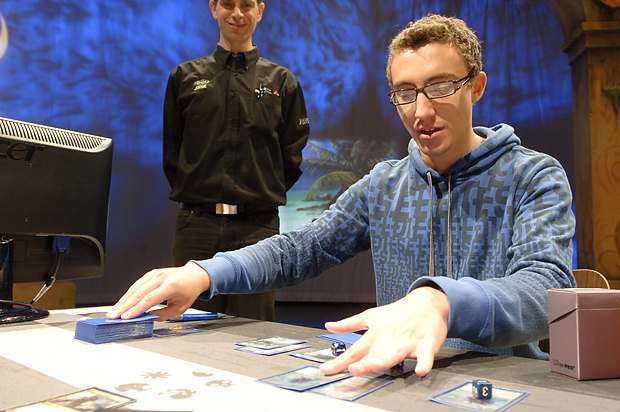 Orsini-Jones implores his Ad Nauseam deck to cough up the goods.

Orsini-Jones had no third land, but he did have a second Lotus Bloom which he suspended as well. Clearly, he meant to deal with the first Mage soon. Woods, however, summoned a second Meddling Mage and named Punishing Fire to protect his army from undue tampering. Then, he cast a third Meddling Mage, naming Ad Nauseam. Orsini-Jones made a sad face.

Orsini-Jones could only agree, as the 2/2s took him down.