Round 3: Itaru Ishida vs. Ken Krouner 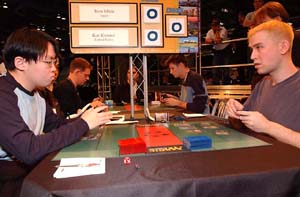 Ken Krouner's winning smile hasn't faded since his Top 8 appearance at Worlds in August. He still sports the same dye-job hairdo and completely easygoing nature. Waiting for his deck to pass inspection, Krouner had a minute to talk about his deck choice. He said that he chose The Rock because it's a deck that goes 55% against everything, and the field was too wide-open to predict.

Ishida's playing the Japanese take on Extended Psychatog, and with so many combo decks around Counterspell's got to be good again. Ishida seems to have opened up a bit following the festivities at the Invitational, flashing a rare smile as he wished Krouner good luck.

Krouner stared at his opening hand for a full minute before committing to sending it back with a frown. He did, however, take the forbidden peek at the top four, and sighed contentedly at what he saw. He kept his six. Ishida's hand needed no improvement.

Krouner started with two Birds, Treetop Village and Vine Trellis opposite Ishida's pair of islands. He started to swing for three. Ishida was happy to wait. Krouner was out of gas, holding just a pair of Deeds. Cunning Wish at end of turn fetched Intuition. Ishida untapped and dropped Sapphire Medallion. Krouner pulled a Mesmeric Fiend, but Ishida protected his investment with Counterspell.

Down came the Intuition. "Islands?" Ishida just laughed. He got his Accumulated Knowledges and drew three. Then he untapped and busted out Psychatog. Krouner blew the deed to delay the party, but Ishida got ready to refuel with a Cunning Wish for Stroke of Genius. All this time Krouner was hitting with his Village. At eight Ishida Annulled the second Deed. At five he Stroked for five and Thwarted another. The Village brought him to two.

Ishida calmly untapped, Wished for Corpse Dance, and played his sixth land to dance the 'Tog into play for lethal damage. 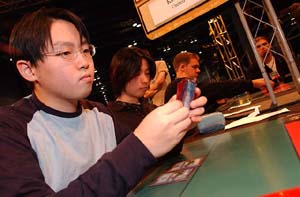 "That is the coolest thing that's ever happened to me in a match I lost. I am seriously in awe. This is why I should test the Japanese." - Ken Krouner

This time around Krouner led with Duress. He saw Intuition, Sapphire Medallion, Cunning Wish, Annul, Treachery and two lands. Naturally he took the Medallion. Ishida played a land and passed it back. Cabal Therapy for Cunning Wish saw that he'd drawn a second one.

Now Krouner was rolling. Ishida played a second land and was faced with Phyrexian Negator. He played his third and saw Krouner flash his Therapy back while playing out Dust Bowl. Ishida minimized the damage by Intuitioning for Accumulated Knowledges, saving the second Intution in his hand, but leaving him just one Knowledge in his deck. Krouner Bowled away a land, and with Negator and Treetop on board, there was nothing Ishida could do. 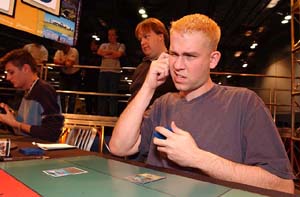 Ishida didn't like it, but he knew he had to send back his first hand. Krouner had no trouble keeping his. He led with Duress, stealing Counterspell and seeing Cunning Wish. His second turn he played Cabal Therapy, and again, Ishida had drawn a second Wish.

With Ishida's hand dismantled, Krouner set about killing him. Vampiric Tutor got him his fifth land, a Dust Bowl, enabling Spiritmonger. Ravenous Baloth and Treetop Village soon followed. Ishida's draws of Sapphire Medallion, Powder Keg and Psychatog were no match.