Round 3: Itaru Ishida vs. Kouji Nose 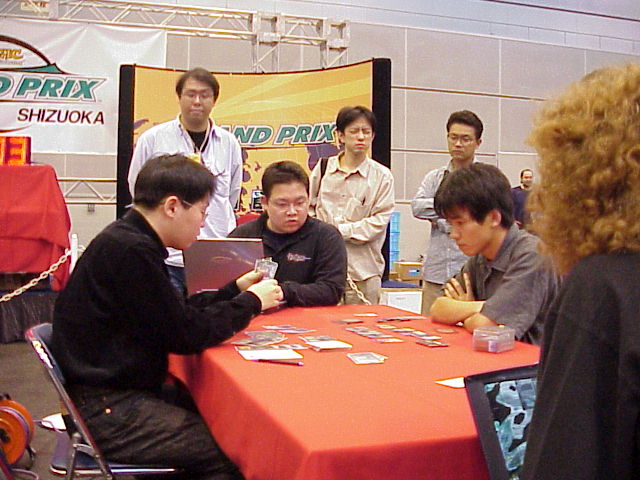 Everyone knows Itaru Ishida, the humble bespectacled winner of the largest sanctioned event ever, Grand Prix - Kobe. Today he's only got two byes to work with, and so has concocted a blue-black-green build in hopes of maneuvering past six hundred other competitors. Meeting him after a two-round rest is Kouji Nose, a strong player from Nagoya, best known for his Top 8 finish in the 2000 Japanese Nationals. Nose is running a very strong blue-black-red deck.

Nose took the RPS volley on the second try. He chose to play, then mulliganed. He came back strong with Thought Eater and Crypt Keeper. Ishida's Foul Imp traded with the flyer, then he solidified the ground with Dirty Wererat.

Nose brought out Cephalid Looter to fix up his hand, and had Gravedigger unearthed the Thought Eater. Ishida used Syncopate to stop the flyer. Zombie Assassin came out for the champ, and took care of Chainflinger before it could get out of hand. Ishida then got a Looter of his own. Nose came over the top with Stalking Bloodsucker.

Now Ishida was on a fast clock. A second Looter and a Werebear made his position strong provided he could find an answer for the Bloodsucker. With none forthcoming, he conceded the first game.

Ishida went transformational when siding for the second game, pulling his green for white flying power, as well as Embolden.

Nose was quick on the board again in the second game with Crypt Keeper. Ishida played Words of Wisdom and brought out a Looter, but it was Afflicted. He followed up with a Crypt Keeper of his own, and the two traded. Nose kept the pressure up with Dirty Wererat.

Ishida started to take control, with a Syncopate for Chainflinger, followed immediately by a Scrivener to reclaim it. Nose seized the opportunity. With Ishida tapped out, he dropped Stalking Bloodsucker. The vampire threatened to take the second game as it had the first.

Ishida tried to make a game of it. Zombie Assassin watched helplessly as the Bloodsucker and Wererat knocked its controller to eight. Nose continued to drop elbows with Whispering Shade. Now it seemed there was no way out for Ishida. He held back on his turn and Emboldened twice, falling to seven. His next play of Wayward Angel was too little, too late. The Shade finished him in two turns.