Round 3: Jin Okamoto vs. Justin Gary 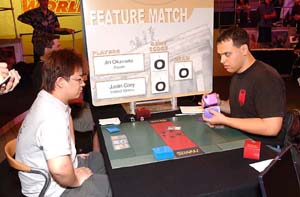 Justin Gary has always been a solid player, but in the past few seasons, he's really stepped up his game. Between Pro Tour and Masters titles he's been able to pad his bank account very well off Magic, and last month in San Diego, his career came full circle. Six years ago, Gary was the United States National Champion, and that team was the first American squad to not win at Worlds. Fast forward to 2003, and Gary is once again a member of the US team, and looking for redemption. A strong showing this week would go a long way towards the United States reclaiming the title, and would help lift the specter of 1997 off Justin Gary's otherwise stellar career.

Across the table from Justin Gary this round is "The Last Emperor" Jin Okamoto. Okamoto is considered one of the best Japanese players, and was the last APAC Champion, hence his nickname. Jin has had multiple Pro Tours where he has missed Top 8 on tiebreakers, and is looking to cement his reputation this week in a big way by playing in the Top 8 of Magic's most prestigious event. Gary is running a version of Gabriel Nassif's black/white deck from Euros, which packs plenty of powerful spells such as Decree of Justice and Akroma's Vengeance. His addition to the deck is Temple of the False God, although he says the deck is hurt by the loss of Duress. Okamoto is running Wake.

Both players started off extremely hesitant, without much happening until Gary cycled Decree of Justice on end step to make three 1/1 Soldier tokens. Wrath of God a few turns later took them out, and Gary cast Cabal Therapy, naming Mana Leak. It was there, along with two copies of Decree of Justice, and Moment's Peace. With the path clear, Gary cast Skeletal Scrying for four to go up on cards. Okamoto had Compulsion waiting on top of his library, and plenty of mana to go dig for what he wanted. 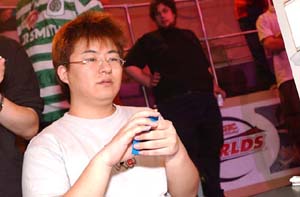 Okamoto cycled one of his Decrees, getting four Soldier tokens. The resulting attack brought Gary down to twenty, since he had been gaining life off cycled Renewed Faiths. Gary cast Akroma's Vengeance, and Okamoto cycled many cards through Compulsion in response before finally sacrificing it. Gary untapped and cast Haunting Echoes, which Okamoto responded to with Cunning Wish. This fetched Circular Logic, and the Echoes was taken care of. Gary followed up by tapping out for Skeletal Scrying for four, but Okamoto had the answer in Mana Leak.

Okamoto sensed his opportunity, and tapped five for Mirari's Wake. Gary attempted to take it off the board with Akroma's Vengeance, but once again, Okamoto used a Wish to find Circular Logic and protected his powerful enchantment. On the following turn, Gary cycled Decree of Justice to make only two Soldier tokens. One was sacrificed to flash back Cabal Therapy, and Okamoto responded by cycling his Decree. Thanks to the Wake his Soldiers were plentiful and more powerful, as he now had eleven 2/2 Soldiers.

Gary named Cunning Wish, and saw a hand of Compulsion, Mirari's Wake and Mirari. Wrath of God cleared away the Soldiers, but Okamoto got right back to work, playing Compulsion along with Mirari. Gary once again tried Haunting Echoes, and as Okamoto started calculating what he had to do, Gary became increasingly irritated, feeling that Okamoto was playing too slowly. He cycled cards through the Compulsion and found a Logic, causing Gary to concede. The American sighed, as he started collecting his cards and looked at the time remaining in the round.

Gary played Cabal Therapy naming Mana Leak, and saw a hand with two Decrees, Cunning Wish and Deep Analysis. On the following turn he played a second Therapy, getting the Wish out of Okamoto's hand and revealing a Circular Logic. Temple of the False God was his third land, but a fourth and fifth showed up in turn. Okamoto cast Deep Analysis and Gary summoned and sacrificed a face-down Exalted Angel to flash back Therapy on Decree of Justice, getting three copies out of Okamoto's hand. This left him with just Compulsion and a Logic. 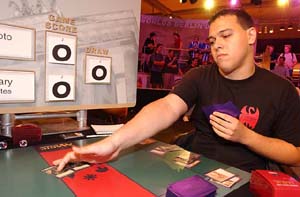 Another morphed Angel died to Wrath of God, and Mirari's Wake came out a turn later. Gary had been cycling multiple copies of Akroma's Vengeance to find a sixth land, and more importantly, a second white source. Needless to say, his face and tone showed that he wasn't too optimistic about his chances now that Okamoto's key enchantment was on the table, and he had cycled two answers. Okamoto continued to draw cards with Deep Analysis, and played Compulsion. Gary simply summoned Undead Gladiator, as Okamoto did what his deck was designed to do- broken things. He put a ton of cards through Compulsion on end step, drew even more with Deep Analysis, and played a second and third Wake. The Gladiator was sacrificed to flash back Cabal Therapy, and Okamoto put Circular Logic through Compulsion to counter it and draw a card. Gary's Mobilization was countered by yet another Logic, and Okamoto continued cycling, looking for a way to finish Gary off. He played Mirari, and ended his turn.

Gary- "I'll run it. Akroma's Vengeance...resolves? I got a few snickers out of the crowd for that one."

Okamoto had Mana Leak, and used Flash of Insight to search the remainder of his deck. Cunning Wish set off the chain finding another Wish, along with Krosan Reclamation.

Gary- "I'll concede and save everyone some time."