Round 3: Jon Finkel vs. Dave Price 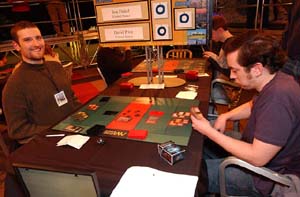 Dave drew his hand. "Mulligan? Mulligan? Mulligan?" asked Johnny Magic, getting all in Price's face. Price kept, and started playing Sligh as usual with a turn two Sparksmith. He continued with a morph creature (Blistering Firecat perhaps?), to which Finkel responded by cycling Krosan Tusker to grab a much needed Mountain to go with his three Forests.

Price threw his guys into the breach, as Finkel cycled a second Tusker to grab another Mountain. "Look at all this card advantage I'm getting", he muttered. As he untapped and fiddled with his lands, Price stared off into space, at the spectators, and seemly singularly bored in waiting for Jon to make his move. When it was a morph creature, Dave finally mosied his hand slowly across the table, and lethargically picked up his hand. After a couple of frowns and grimaces, he drew his card for the turn.

With Sparksmith and his morph on the table, Price attempted to shoot Finkel's creature for one. Jon responded by casting Chain of Plasma, which would kill the tim and keep it from dealing damage on resolution. Dave thought long and hard, and finally made the play of Sunfire Balm to save his guy, and followed with Glory Seeker.

Jon untapped, and shipped his creature across the table. Dave declined to block, and Finkel tapped six mana to reveal Snapping Thragg, the mega-Skirk Commando. Not wanting to keep things a mystery, he chose to gig the last face down creature on the table, which turned out to be Daru Healer.

Dave nodded at this turn of events, untapped, and came across for another three to drop Finkel to eleven life. Solar Blast took care of the Thragg, though Finkel had seven mana and Venomspout Brackus lying in wait. This creature met with Pacifism, and the offensively oriented Sparksmith and Glory Seeker were joined by Battering Craghorn. Finally, Johnny Magic mounted a serious defense with Symbiotic Wurm and Wirewood Elf. On the next turn, the Craghorn plus the Sparksmith traded on a double block with the Wurm and Elf, allowing Dave to play a rather large Daunting Defender. 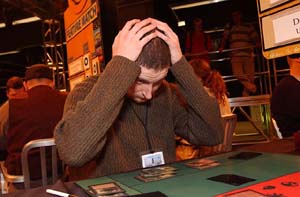 On the next turn, Jon smashed the cleric with Pinpoint Avalanche and went on the O with all five of his one power weenies. Glory Seeker took one out, but Jon quickly played a morph guy after combat.

Price coaxed a trade of Glory Seeker for face-down Treespring Lorian on the following turn, but then emptied his hand to play one last morph guy. Jon stood at three cards, and used one to cast a second Wirewood Elf. None of his guys blocked Dave's creature, so Price tapped the requisite four mana to turn the 2/2 into a ¾ first striking Daru Lancer.
Sparksmith took out an insect token, and Dave looked to be in a good position with the life totals at nine to five in his favor.

It was not to last though, as Jon drew Naturalize, bringing the forgotten Brackus into the fray. He swung with seven power worth of creatures, and then sent Price deep into the negatives with Searing Flesh.

Dave went into full Sligh mode again with both a first and second turn Goblin Taskmaster. Finkel slacked none, casting a second turn mana elf. The Wirewood traded for two mana and a Taskmaster, allowing Jon a breather. This gave him the leg up on the morph game, as he safely played a morph guy the following turn. It too blocked a Taskmaster, so the board cleared of all non-land permanents while the graveyard filled with Charging Slatebacks and Goblin Taskmasters

Dave started the game over with Dive Bomber, which died quickly to Chain of Plasma. "Ship it back?" asked Jon, Dave choosing not to dignify the question with an answer. Finally, Finkel started asking questions of his own, playing Wirewood Savage, Snapping Thragg and Pinpoint Avalanche (on a freshly summoned Gustcloak Savior) on consecutive turns. 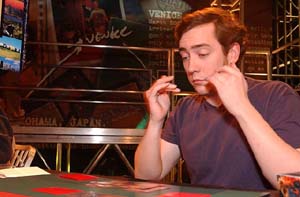 The King of Beatdown scrambled to steady his board against the Thragg with Daunting Defender, which seemed to work for a turn as Finkel simply cycled Krosan Tusker to grab a second Mountain to go with his first and his Grand Coliseum. This gave him enough mana to play a face down dude, and once again Dave emptied his hand, this time to cast Aven Soulgazer and to peek at Jon's face down creature.

"Roar!" yelled Jon, revealing Krosan Colossus, with only six mana on the board. "That takes eight to morph, right?" "Yeah". Dave sent his Defender across the table, and Jon doubled it up with his Thragg (which died) and his not-quite-sneaky Colossus (which did not die). The Snapper was quickly replaced with Venomspout Brackus, netting Jon another card and a 5/5 body.

Dave debated sending his Soulgazer into the breach, and every time he would put his hand on the flyer, Jon would laugh in glee at Dave's predicament. With the life totals at fifteen even, Dave didn't seem to be in a great position. All three of Finkel's guys went ballistic the next turn , the Brackus a target of Commando raid after no blockers to kill the Soulgazer. Even though Dave managed to first strike the Wirewood Savage with a newly cast Daru Lancer, Finkel had Naturalize for a top-decked Pacifism, and kept his Searing Flesh face up on the table.