Round 3: Jordan Berkowitz vs. Justin Gary 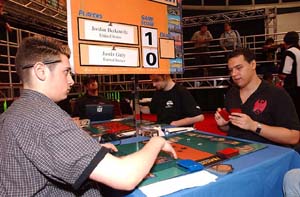 You would hard pressed to find two brasher players anywhere in the world. While constant readers of Sideboard coverage may have gotten used to Justin's—what's the polite word for it?—confidence, they haven't seen anything yet. Jordan Berkowitz is quickly making a name and a reputation form himself on the Pro Tour. He is as loved by his supporters as he is vilified by his detractors. Their problem with the rising young star from the Philadelphia area? His confidence. Not only is Jordan better than you, he damn well knows it and wants you to know it as well.

Both players were anti-confident coming into this round. They both split their first two rounds and neither one feels strongly about the 40 cards in front of them. Jordan played a second turn Sunstrike Legionnaire and even got to sneak a point in before he played his third turn morph. "Frown," was all Justin could muster on his third turn and sent the turn back to Jordan who played a Daru Stinger. "How many?" asked the dejected Justin. He perked up when no cards were revealed, "I see!"

His frown returned when his fourth turn yielded nothing, "That Stinger was impressive but not as impressive as go, go, go..." Justin paused to play his fourth land and concluded, "Go."

Jordan unmorphed his Charging Slateback and attacked for six and Justin plummeted to 12. Shocked that Justin had nothing Jordan began rooting for his opponent to have a play, "You have to have something...anything!" Justin played an Elvish Soultiller but the reason Jordan could be so supportive for Justin to have a play was the Pacifism in hand. A Goblin Grappler ensured victory for Jordan on the next turn unless Justin could play two blockers.

The two players could only laugh at the absurd game they had just completed. "Look at my board," exclaimed the Philly native. "I told you my deck was awful!"

Justin laughed, "Not as bad as my Turbo Soultiller!"

A couple of weeks back I lost in the Top 4 of a GP Trial to a team of Jordan, Osyp and Ben Stark. I told him that there was a Trial going on at Neutral Ground this weekend and most of the teams with Pro Tour aspirations were excited that Jordan and his team would be here in Yokohama. "God1 I didn't want to come here this weekend. If I had known about the Trial sooner I might have stayed home and run it!"

Justin's day didn't get any better when he had to send back a seven card hand that was devoid of land. He kept his next set and it was Jordan's turn to send it back, "Wanna see mine?" He revealed a hand of six land a lone Daru Stinger. While he was shuffling he mused about keeping it, "Maybe I should have kept it and raw dogged four soldiers." 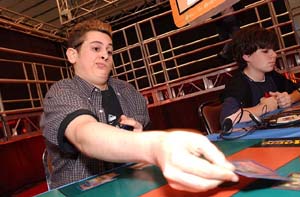 Neither player had exciting openings—Jordan had the turn two Grappler followed by Justin's turn three Wirewood Herald. The Grappler was Crowned with Fury and took down the Herald and Jordan waited to see what goodies Justin's deck had to offer. He shrugged at Symbiotic Elf and then upon reflection, "That's pretty good actually. Best elf you could get there.'

Justin was less than enthused but had to agree, "Pretty good but not outstanding."

Justin complained about his own cards as he played a fifth turn Soultiller, "Turbo Tiller! Right on time!" Jordan, despite his complaints, had the Pacifism and played his Sunstrike Legionnaire as well. Justin played a Treespring Lorian face-up and sent it back to Jordan. Jordan played a morph but could not attack past the Lorian. He looked at his Stinger in disgust, "God! I need bigger Stingers!"

"What do you got, five soldiers?"

"That is probably an overstatement."

Justin sent his Lorian in for five damage and made an elaborate show of slowly tapping five lands with a big grin, "Turbo...

"Tiller!" In addition to the two in his deck Justin apparently passed on a chance to get a third instead taking a Mistform Seaswift.

Jordan played a morph and sent it back to Justin who played his own face-down guy. Jordan unmorphed a battering Craghorn EOT and swung with his second morph. When Justin had no blocks he unveiled a Charging Slateback and the YMGer went to 14.

Justin had no play and traded his Soultiller for the Slateback and used its ability to shuffle it, the Herald, and the Symbiotic Elf back into his deck. Looking for men he then cycled Complicate EOT but he only managed a Mistform Wakecaster. Jordan attacked with his Craghorn and his Grappler—provoking the Wakecaster. Justin put his Lorian in the way of the Craghorn and asked, "Whatcha got? If you have a trick I'm wrecked." Jordan indeed had a trick—of sorts. With both creatures' first strike damage on the stack he cycled Slice and Dice. Both of Justin's guys died but so did his Grappler and Craghorn.

Jordan began to keep Justin's morph at bay by tapping it during Justin's upkeep. The Legionnaire would untap if Justin played a creature. Eventually Jordan got to eight land with a Flamewave Invoker on the board. "Flamewave might be a little hard for U/G to deal with," smirked Jordan. 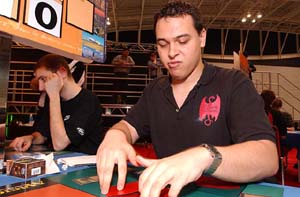 "He's saucy," agreed the man in the YMG shirt. "I actually cut one off in the draft."

The sauciest of goblins dealt five to Justin and then belle of the Venice ball hit the table—Akroma came across and dealt six to the shell shocked Justin. "I guess I'm taking six and going to 3."

When Jordan attempted to tap Justin's morph he flipped up Seaswift and proclaimed, "Now we're going to draw the only card that can win me the game..."

Justin slowly dragged the card across the table toward taking a peek before answering, "No...but its not Forest either." He dropped the land on the table and extended the hand. The card he was referring to was Essence Fracture but upon reflection Justin saw that he actually had no outs.

It turns out that Jordan actually had seven soldiers—including a Cloudreach Cavalry and one bird! When I started looking through his deck he was worried, "Don't post my deck! People are just going to laugh at me... On second thought... They're gonna laugh at Justin!"

Justin was still hoping to make day 2 despite two early losses. 'I need to win my next round and then get a soft draft pod so I can 2-0-1 into day two. I really want to make the Invitational and need a good chunk of PT points. It would be nice to win the pro Player of the year race but let's face it...it's tough to beat Kai!"

Zvi had wandered over at this point and laughed at the suggestion, "No its not! I beat him last round and I did it at Venice too!"