Round 3: Joules Haigh vs. Gert Coeckelbergh 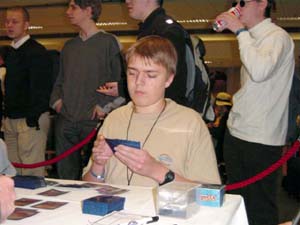 Joules was one of Scottish Magic's best known players and has two Pro Tour appearances to his name along with one European Championship. Gert was a more established player with five Pro Tour appearances, his best finish being 71st at Pro Tour LA 2000. Gert was playing Domain with the new additions from Apocalypse of Legacy Weapon and Evasive Action. Joules was playing a straightforward red green deck that seems to be having a revival in the face of a control oriented field.

Gert won the roll and chooses to play. Joules led with a Thunderscape Familiar and followed it up with Blurred Mongoose on the next turn. Gert played Harrow at the end of the turn which allowed him to play Allied Strategies for the maximum five cards. Gert discarded two Harrows and passed the turn. Joules played a Raging Kavu and kept the pressure on Gert, knocking him down to 11. Gert started to establish control on his next turn playing Powerstone Minefield, a very strong card in a format where "bears" (2/2 creatures) of all sorts are very popular.

A Global Ruin from Gert dropped Joules down to two mana and when Gert played a Collective Restraint, things looked bleak indeed for Joules. Things continued to go from bad to worse as Gert then dropped a Legacy Weapon. Joules attempted to burn Gert for the win with a Ghitu Fire for three and a Rage the following turn, but scooped once Gert began to remove his land from the game. 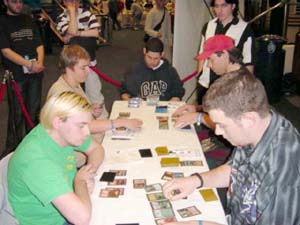 In the background, Joules Haigh vs. Gert Coeckelbergh

Joules was quite jovial at the start of game two and chose to play first. Gert played a Blurred Mongoose, an interesting sideboard choice that serves a variety of roles, in this case trading with a Raging Kavu that Joules played turn three. A second Mongoose was, however, not the best blocker for the Shivan Wurm that hit the table on Joules's next turn and now Gert was definitely on the back foot and needed to find an answer for the big trampler. Gert played a Sterling Grove on his turn that should have let him find a potential answer to the Wurm. After attacking, Joules added a Kavu Titan to his side of the board. Gert sacrificed the Grove to fetch a Restraint, which he played during his next turn. With only three different basic land types in play, Joules would still be able to attack with one of his creatures. This all proved irrelevant as a Thunderscape Battlemage killed the Restraint, at which point Gert scooped and they moved on to the decider. 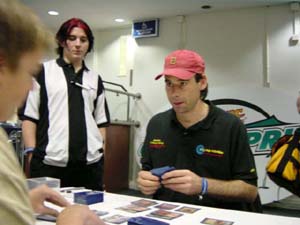 Gert chose to play first and mulliganed his first hand, deciding to keep the hand of six. Joules played an kicked Kavu Titan on his turn and attempted to follow with a Raging Kavu on his next turn but it was met with a Evasive Action from Gert. A Sterling Grove was again sacrificed to get a Restraint which was then played. Joules again had the answer with the Thunderscape Battlemage, allowing him to again attack with the Kavu Titan. Joules maintained the pressure on his turn when he cast a Skizzik with no kicker and attacked Gert down to five.

During his turn Gert cast Global Ruin, which could have potentially bought him a turn to find an answer. Joules, however, had other ideas and after playing a land summoned a Raging Kavu, which attacked along with the Kavu Titan and Thunderscape Battlemage for the win.