Round 3: Juan Tavira vs. Vitor Franco 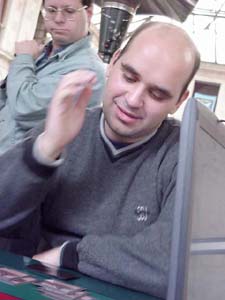 The first one is Spanish, the second one is Portuguese. Neither of these players is very famous but they have a 1-1 record in common.

Most of the people are watching the other feature match but some are curious enough to be interested in the "fantasy" one.

Juan, who goes first on Game 1, is running a four-color control deck. Vitor is playing a traditional Sligh deck. Despite one of his lands being wasted, the Spanish manages to play Propaganda before any creature reaches the board. Then his Seal cleans a Cursed Scroll and starts a Bottle Gnomes. After countering a few blasts, he impulses for Reviving Vapors. Apparently, Juan had predicted this match up. A second Bottle Gnomes reaches the board increasing the savage beat-down.

Did I say 'traditional Sligh'? I apparently didn't take one of our two format breakers in account, since Vitor eventually draws his first creature, a Savage Firecat, who gets countered by Juan's Force of Will. At this time he is all tapped and Vitor jumps on the opportunity to play a Price of Progress, which, added to three Barbarian Rings, lets Tavira go down to one. 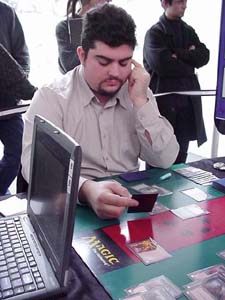 In the following turns, a couple of other blasts force him to sacrifice the Gnomes to stay alive. Then Franco plays a Chimeric Idol, and despite his seven lands doesn't attack. He asks if he can pay for the Propaganda before the attack. The answer is no. So he says 'go' twice in a row and loses two turns, in which Finkel comes into play and Dromar's Charm gets top-decked. Seemingly understanding that there's a way to attack, Vitor calls over a judge to ask him how he can possibly do it. The judge comes back after a ten-minutes break and ... gives him the explanation! Even after that, he chooses not to attack. The Price of Progress he just drew is countered by the Charm and Juan seems to be back in the game as he plays a Fact or Fiction, which gives him Counterspell and Force of Will. Vitor suddenly wakes up and decides to attack. On the next turn, he wins the game.

Turn one Wasteland, turn two Jackal Pup, turn three Goblin Patrol: the game starts pretty well for Franco who even Pyroblasts a Finkel. Juan tries to resist with his early dropped Propaganda, but making mistakes such as forgetting to play Fact or Fiction two turns in a row, he makes any come back pretty difficult. Even the second Propaganda he plays can't help him anymore. The Pup swings for a last dance and puts an end to the Spanish resistance.