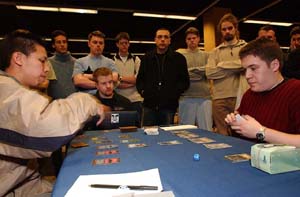 Budde had previously developed a reputation for losing in the first round of Masters tournaments, but he's obviously now past that. Kai has played Mirari's Wake to the third round, and as a result, has already earned a significant amount of money for the weekend. In his way this round is Ken Ho, another Pro Tour Champion. Ho is running green/blue, the same archetype that brought him that Championship at Osaka.

Ho summoned a second turn Wild Mongrel, and followed with Standstill; Budde had Memory Lapse. Compulsion was played on the following turn, and Ho played Merfolk Looter before getting Standstill into play. Budde started to cycle away cards, attempting to set up an optimal hand for when he would break Standstill. With each turn the Mongrel would attack for two and Budde would cycle more cards with Compulsion, or cycle Renewed Faith to gain life. When he dropped to six life Budde broke Standstill with Cunning Wish, getting Seedtime. On the following turn he went for it and cast Mirari's Wake, which resolved. Ho played Arrogant Wurm on end step, getting easy lethal damage on the board. He took his turn and attacked, drawing Moment's Peace out of Budde's graveyard. Ho responded by activating Merfolk Looter, and his body language showed the he wasn't happy with where the game was headed. Moment's Peace resolved, Ho stopped to think, and tapped out for Upheaval, floating two blue mana. A counterwar resulted, and Budde came out on top. 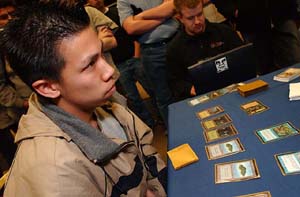 With Ho tapped out, Budde took his turn and played Mirari. Careful Study saw Ho discard two land, and a second put Wonder and a land into the graveyard. The Mongrel and Wurm attacked, and Budde used Moment's Peace to stay alive. Yet another Careful Study put Roar of the Wurm into the graveyard, and a Basking Rootwalla into play. This was followed by Standstill, which was countered with Circular Logic discarded to Compulsion. Budde took his turn and flashed back Deep Analysis for more options, going down to one life point. Ho's next attack was nullified with Moment's Peace, and he asked Budde to count his library, which was at nine cards. Budde started to go off with Cunning Wish, grabbing Circular Logic. He took his turn and played Wrath of God, clearing the board.

Roar of the Wurm was flashed back to give Ho some pressure. Cunning Wish was played and copied, getting the other Wish and Krosan Reclamation. He used the Reclamation on himself twice to prevent decking, copying it each time. This was enough to convince Ho to concede.

Ho mulliganed down to five. He still made four straight land drops, and had Basking Rootwalla and Ravenous Baloth as threats. With Ho tapped out Budde played Mirari, and the Baloth and Rootwalla attacked for seven points of damage, bringing Budde down to twelve. Kai simply played Compulsion, and ended his turn. Moment's Peace slowed down Ho's attack, and Upheaval reset the board, but from a bad position where Ho could not make the first land drop. The Rootwalla was in play, and Ho used his turn to play Careful Study, discarding Deep Analysis and a land. Budde replayed Compulsion. Ho looked to increase his pressure on the board with Werebear, but Budde had Memory Lapse. Kai tapped out for Deep Analysis, and Ho used the opportunity to play Werebear and Merfolk Looter. Budde still had Moment's Peaces to spare to stay alive, and Ho brought out more pressure with Wild Mongrel. Standstill made the board even better, and Ho's next attack was just enough to defeat Budde, but the German cycled Renewed Faith to stay alive another turn. 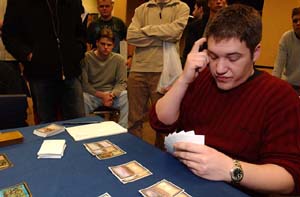 Budde- "I've been really good at drawing this Wrath of God card in this match."
Ben Ronaldson- "You're playing Wrath?"

On the next turn Budde had to break Standstill with Moment's Peace to stay alive, and the resulting counterwar was won by Ho to force a third game.

Both players mulliganed their opening hands. Ho had a second turn Looter, and Budde had Complusion. Things weren't looking too good for the German, and he actually had to pitch Renewed Faith to Complusion because he didn't have a white mana to cycle it regularly. This was done in an attempt to find a third land, and was not successful. Meanwhile, it was business as usual for Ho, who used Careful Study to get a Rootwalla into play, and Deep Analysis into the graveyard. The Looter went about its job as well, putting a Roar of the Wurm into the graveyard, which was flashed back soon after. Budde eventually found lands, but the tempo advantage lost due to the mana screw was too much.