Round 3: Kameel, John, and Erik vs. Watch Out for Timberwatch

"Oh, I get it, you guys misspelled your names!" -- Paul Rietzl

"I see the wheels have started turning." -- Eric Froehlich

At first glance, it looked like the teams had lined up in order of chattiness. The animated Paul Rietzl and "Efro" on the end, the stern-to-sassy Jon Finkel and Peter Guevin in the middle, and silent seething Tom Guevin versus a typically silent Kamiel Cornelissen. Formerly Ace-Ten Off, "Kameel, John, and Erik" decided to mix things up after winning Grand Prix - Amsterdam. Last year, the Guevins were with Danny Mandel, but he went on to bigger and better things, and so they hired Rietzl. 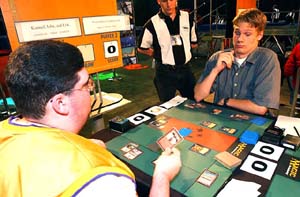 Froehlich and Rietzl were the first to start, with Froehlich's red-blue serving up three Islands and nothing else. He was playing, though, and his opener of morph, morph, morph got past Rietzl's Spectral Sliver and Severed Legion. After Rietzl added a Nantuko Husk, Froehlich hit him down to 8 and cycled Lonely Sandbar into the mountain he needed for Thoughtbound Primoc.

Rietzl hit back to leave Froehlich at 9. Paul dropped Lingering Death on the Primoc and played a morph. Froehlich hit in with two morphs and a flier. Rietzl blocked with Husk and morph. Froehlich stacked damage and Rietzl's eyes goggled as Froehlich flipped up Raven Guild Initiate to save the Primoc. He replayed it and passed it back to Rietzl.

All that fear was for naught, however, as Rietzl had the seven lands he needed for his Searing Flesh, and after swinging in, the game was over.

Rietzl 1 - Froehlich 0
Kameel, John, and Erik 0 - Watch Out for Timberwatch 0

Finkel and Peter Guevin were in for the long haul. After Finkel's Aphetto Exterminator took down Mistform Seaswift only to be bested by Daru Mender, Peter turned things around with Doubtless One--very good considering how many Clerics were in the two decks. Finkel had the Pacifism, but the next creatures they played were all defensively minded, and so not much headway was being made.

Next to them, Tom Guevin remained tight-lipped, unwilling to talk in the presence of "The Media." Cornelissen was happy to let his cards do the talking for him. Guevin was tight on land while Cornelissen got in with Carrion Feeder, Wirewood Elf and Wirewood Savage. Guevin traded where he could, but the Feeder kept on growing, and just as he was able to keep some men on the board, Cornelissen came back with a 5/5 Stag Beetle. That put Guevin in the tank.

A minute later, Cornelissen asked him to play a little faster. Guevin exploded.

"He's just trying to throw me off my game! I'm not going to fall for that, Jon! I don't know who you think you are!" -- Tom Guevin

Guevin had Contested Cliffs, but no red mana to turn it on. He had to double up on the 5/5 Feeder with an Undorak and Wellwisher, pumping up the Undorak. Cornelissen turned over Vitality Charm, earning the first game.

Things hadn't gotten closer to resolving between Finkel and Peter Guevin. Finkel's Akroma was neatly handled by Peter's Shieldmage Elder and horde of Clerics. They continued to amass men.

It looked like another quick game for Rietzl. Froehlich got some early beats but his attackers kept getting wiped out. Lingering Death and Pinpoint Avalanche kept the board clean, but a Riptide Shapeshifter slipped through. Rietzl dropped a Dragon Roost and waited. Froehlich hit and waited on his mana. Rietzl passed it back, and Froehlich searched up Arcanis the Omnipotent, along the way showing his two Sparksmiths. Cruel Revival shut the Legend down. 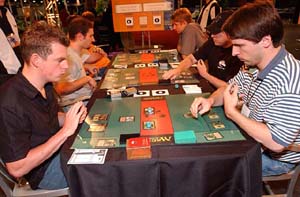 Froehlich dealt a quick 4 with Crested Craghorn while he could. Rietzl made a Husk and a Severed Legion. He was getting low on life. Froehlich made a morph and Sledder. Rietzl bought some insurance with a Festering Goblin and got ready for a Dragon. Froehlich flipped up his Mistform Seaswift.

Froehlich made no play. Rietzl waited. Finally, a second mountain from Froehlich, who played morph before swinging in with his Goblin, Craghorn, and Seaswift, provoking the Dragon token. Rietzl made a second token, but it was shot down by a Shock and a turned-up Volcanist. Now Froehlich had a second Goblin to sacrifice to his Sledder, and was able to dodge the Festering Goblin's ability to hit for the win.

Afterwards Rietzl realized his minor error. If he sacrificed the Festering Goblin before making a token, Froehlich would have had to give up his Sledder, and then wouldn't be able to sacrifice the Volcanist after it dealt with the token.

Froehlich 1 - Rietzl 1
Kameel, John, and Erik 0 - Watch Out for Timberwatch 0

Tom Guevin had just gotten wrecked. His morph swung into Wirewood Elf and morph, with Wirewood Herald on the sidelines. Playing around Vitality Charm, he unmorphed Undorak and put all the damage on the Elf. Cornelissen was tapped out but for his Elf, and showed Guevin Wirewood Pride.

From there, Cornelissen started drawing lands, and hit his seventh just after Guevin played a 7/7 Feral Throwback. He swung in with a morph, and Guevin correctly guessed it was the Titanic Bulvox and fell to 8. He hit back and provoked away the lone Centaur token, setting up a Barkhide Mauler to trade with the Bulvox and falling to 5.

Unfortunately for him, Cornelissen had hit eight mana, and so it was only a matter of time before his Centaurs outnumbered Guevin's blockers.

Things were quickly evened up when Rietzl dropped a turn 2 Cabal Interrogator in the deciding game against Froehlich. His slow start meant his hand was quickly stripped, and then Rietzl started to lay the beats. His Shock came only after he lost his Arcanis.

"They wanted me to pull Searing Flesh and Interrogator, and those were my only ways to win this match." -- Paul Rietzl

Rietzl 2 - Froehlich 1
Kameel, John and Erik 1 - Watch Out for Timberwatch 1

Finally, Finkel was able to win his lockdown game. Skinthinner took out the Shieldmage Elder, Whipgrass Entangler kept the two blue creatures busy, and an Akroma's Blessing against white let him come through for 28 damage. 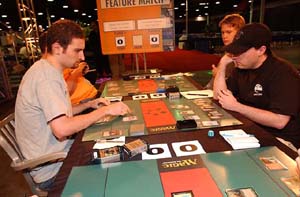 "I've run people in three minutes before, but probably no one of Jon's caliber." -- Peter Guevin

Guevin opened with Deftblade Elite and got in a point before Finkel dropped Sunstrike Legionnaire. He made a morph, and Finkel answered with the mighty Zealous Inquisitor. He stopped Guevin's morph, and Guevin cycled away Choking Tethers and Akroma's Blessing before hitting for 1. Finkel hit for 2 and played a morph.

The Legionnaire was making Guevin's life tough. He made a Covert Operative and passed it back. Finkel locked down his non-Operatives and hit for 4. He cycled away a Twisted Abomination and played yet another morph. Guevin returned fire for 3 and plonked down a Daunting Defender.

Finkel patted his mana and then tapped it all, turning up Skinthinner to clear a path for his troops. The Elite was happy to trade with the Zombie, and Guevin fell to 10. His Operative brought Finkel to 12, but his morph remained locked under the Legionnaire. He made a Battlefield Medic and a Mistform Seaswift. Finkel had all the answers. Profane Prayers got rid of the flier and he hit for 4, then Pacifism shut down the Operative.

Guevin was fast running out of options. He bought a turn with Choking Tethers, but Finkel had more men in reserve. A turn later, the match was his.