Round 3: Kamiel Cornelissen vs. Andrew Johnson 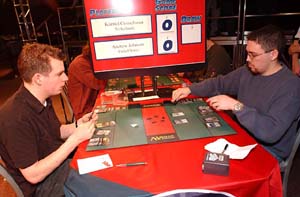 Kamiel Cornelissen, the Dutch Conqueror with the patience of ages, continues to put up monster finishes. At New Orleans he broke his streak when he "only" finished in the Top 32. Today he faces his greatest challenge, the seventeenth president of the United States. Andrew Johnson boasts a resume that includes a recent finals appearance at Grand Prix - Atlanta, the restructuring of the former confederate states in 1865 and being acquitted of eleven articles of impeachment in 1868. According to whitehouse.gov, "He was an adept stump speaker, championing the common man and vilifying the plantation aristocracy." Though his performance suffered after his death in 1875, Johnson has worked at his game and is back in fighting shape.

Johnson was having none of it. He immediately used Innocent Blood to take it down, giving Cornelissen three cards. Then he replayed his Dreamwinder. Cornelissen answered with Gorilla Titan, but Johnson's Scrivener brought Ghastly Demise back for an encore. Cornelissen Peeked, and saw Aether Burst, Patriarch's Desire, and swamp.

Then Johnson displayed some sickness, taking down Cornelissen's second Call token with a Burst that also returned Scrivener to his hand. He was unapologetic as he made Rotting Giant and smashed face. In a nearby Feature Match, his teammate Mike Turian celebrated with him. 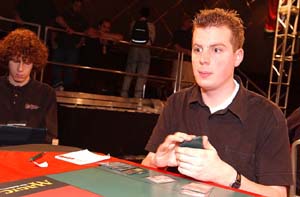 Cornelissen's opening hand suggested that he go for a turn-five Gorilla Titan. He made a Cartographer, answered by Johnson's Rotting Giant, then Nantuko Disciple. Johnson's next play was a very timely Braids, Cabal Minion. Johnson swung with the Giant, and Cornelissen double-blocked, losing his Disciple.

He untapped and pitched the Cartographer, to Johnson's delight. His demeanor soured when he saw the Titan hit the table. He Dematerialized a land to slow Cornelissen down, then had to Burst twice during his upkeep to get past his Syncopate. But Braids was a losing proposition thanks to Cornelissen's Cephalid Scout and wealth of land. He threw her away.

The Titan came back down. Johnson frowned. He had a Patriarch's Desire for Werebear, then Aether Burst for Elephant Ambush and Titan, but the Titan wouldn't disappear for long. Johnson worked his Scrivener, trying to keep the tempo in his favor. Cornelissen chose to let him resolve Repentant Vampire rather than use Fervent Denial, fearing a land in hand to go with his one untapped island and Aether Burst.

Andrew Johnson. Get it? Huh?

He drew Peek too late, but saw Scrivener, Aether Burst, Syncopate and Aven Fisher. He traded his Titan for the Vampire in a double-block, holding his Scout for fear of losing it. Fortunately he had plenty of small guys to keep the pressure up. Diligent Farmhand and Aven Fisher came into play.

Aether Burst sent the flyers home, then got it back with Scrivener, holding Syncopate. He had to take a hit from the Scout and fall to one. The two Scriveners hit Cornelissen to eight. He Elephant Ambushed at end of turn, forcing the Burst. Cornelissen came back with Mystic Zealot, Aven Fisher (syncopated) and Cephalid Scout. Demise from hand took out the Zealot, but he had no answer to the Scout, which dispatched him.

Cornelissen went for the Titan plan again in Game 3, holding back on Peek and playing out Cephalid Scout. His Cartographer met a Syncopate, but that was just fine. Another Scout resolved. Johnson tried a Scrivener and Cornelissen Syncopated, resigning himself to a junior Titan.

It was still big enough. Johnson fell to ten, and Peek showed that his lack of swamps was crippling him. A fist full of black spells would help to turn the tide. When his draw was not a swamp, he extended the hand.

1 Call of the Herd 1 Rites of Spring