Round 3: Katsuhiro Mori vs. Masahiro Kuroda 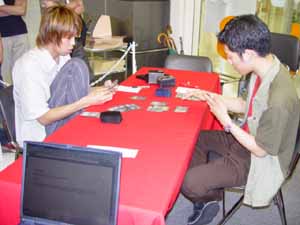 Without a doubt, Katsuhiro Mori is one of the best known Japanese Magic players in the world. His playstyle is quick as lightning, and has to be seen to be believed. Aside from drawing plenty of interest at the feature match table from spectators for the way he plays, Mori can win a few matches too. He was Rookie of the Year two seasons ago, and just recently won the Venice Masters with his team PS2. The other players on that team? Masahiko Morita and Mori’s opponent this round, Masahiro Kuroda. Kuroda is best known for his Constructed skills, and is looking to finish off today’s Standard rounds with a perfect 3-0 record.

Kuroda opened with Birds of Paradise, and summoned Anurid Brushhopper on turn three. Mori targeted it with Smother, and Kuroda discarded forest and Aether Burst to save it. Mori’s Engineered Plague killed the Birds, and Concentrate drew him into more cards. Phantom Centaur gave Kuroda more pressure on the board, and Mori played Psychatog. Wild Mongrel provided Kuroda with another threat, and the Centaur attacked for five damage. A second Psychatog gave Mori another blocker, but he’d need to find an answer to the Centaur soon, or lose. Call of the Herd gave Kuroda an elephant token, and Cunning Wish on end step let Mori search for Chain of Vapor. A second Concentrate put Mori further ahead, and Kuroda sent all his creatures into the Red Zone, sensing that the game was slipping away, and he had to take the initiative before Mori gained control. One Psychatog blocked the Brushhopper, and a second blocked the elephant token. Smother killed the unblocked Mongrel, and Chain of Vapor bounced Phantom Centaur. The Psychatogs were pumped enough to dominate combat, causing the elephant token to die and the Brushhopper to activate. The Centaur came back out, and Mori cast his third Concentrate of the game. He couldn’t find an answer to the Centaur, and conceded.

Kuroda cast Quiet Speculation, getting two Deep Analysis and Roar of the Wurm. Mori played a morph creature, while Kuroda summoned a Brushhopper. Compost resolved on the following turn, the Brushhopper attacked for three, and Deep Analysis was flashed back- Mori used Force Spike to counter it, and flipped over Bane of the Living for zero, opting to get the 4/3 beater right away. It attacked for four damage and Mori played Deep Analysis, while Kuroda had a second Brushhopper. Mori cast Chainer’s Edict and Kuroda responded by activating the Brushhopper, discarding Call of the Herd and a madness Circular Logic to counter the Edict. A Smother killed one of the Brushhoppers, and Envelop countered a second Edict. Thanks to Compost, Kuroda drew three cards in the exchange and was well off. He attacked for another three damage with the Brushhopper, and flashed back Call of the Herd. Psychatog gave Mori a solid blocker, and Compulsion provided another good resource.

Kuroda attacked with his team- Psychatog blocked the elephant, and Bane of the Living blocked the Brushhopper. The Brushhopper left play after damage went on the stack which was followed by Upheaval. Kuroda played a land and ended his turn, and soon had a 3/4 on the empty board. That was enough to finish it.