Round 3: Kyle Bigos vs. Billy Jensen 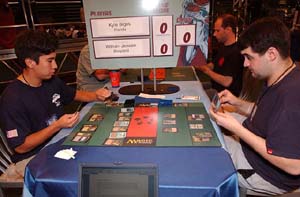 Kyle Bigos is a part of US Nationals history. A member of the only US National team to not capture the World Championship crown, Bigos has since dropped out of the Magic spotlight. When Kyle made the team, his opponent for this round, Billy 'Baby Huey' Jensen was 'four feet tall and ninety-three pounds' In the ultimate evidence of the game's evolution, it's now the 6'7" Jensen who has to be considered the favorite in this match pitting old vs. new.

Billy, knowing that Kyle would soon be on the offensive, played Psychatog. The 1/2 attacked, taking Bigos to 18 life before the end of turn saw the Looter bring Arrogant Wurm into play. Jensen could only sigh as he said 'Recoil Arrogant Wurm', with Kyle discarding and casting Basking Rootwalla. 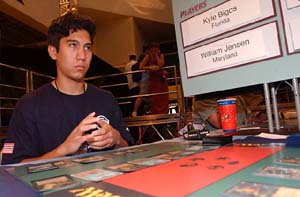 Kyle's turn saw him try to take advantage of Billy's stopping on two land, with the Looter helping Arrogant Wurm re-enter play while the Rootwalla attacked for three. Jensen's turn saw him discard Deep Analysis to Psychatog and cast it from the graveyard, helping him find a third land, but the big man was definitely at a deficit. Billy then played a fourth land and a second Nightscape Familiar in an attempt to stem the tide, but the Looter was still active, eventually cycling more madness creatures into play and more excess land into the graveyard.

Finally, after building up his hand a bit, Billy was ready to make a move. He Recoiled one Bird of Paradise and then another, trying to deprive Bigos of blue mana, presumably to force through Upheaval., but after Kyle Memory Lapsed one of them, Billy's turn merely saw him say 'go' with a frown.

Two turns later, Jensen was again ready for an assault, casting Upheavel only to have it Memory Lapsed, and was then punished for his aggression with Kyle casting Fact or Fiction, choosing Circular Logic over two land, Birds of Paradise and Wild Mongrel. Kyle untapped and cast Upheavel, and rather than prolong the agony of defeat, conceded the game.

Game 2 started with a first turn Birds of Paradise again for Bigos before a hard-cast Basking Rootwalla came into play on turn two. Jensen played lands without spells on his first three turns, but when Kyle tried to cast Wild Mongrel on turn three, Counterspell was waiting. Unfortunately for Jensen, so was Memory Lapse. 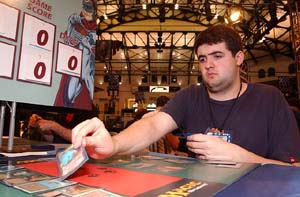 With Bigos tapped out, Jensen was able to take advantage, tapping four land for Possessed Aven, a powerhouse in the match up despite Jenson being a far cry from threshold. Kyle retaliated with Squirrel Nest, but Billy had the answer waiting in Recoil.

At the end of Jensen's next turn, Kyle tried to cast Arrogant Wurm, but it was Counterspelled. He then untapped and continued putting pressure on Jensen, attacking with the Mongrel and discarding another Mongrel to it when the Aven blocked. After damage went on the stack, Kyle Repulsed his Rootwalla and discarded it to the Mongrel, preserving it's part in the game.

Billy's back was to the wall. Kyle attacked with Rootwalla, his one Squirrel and the Mongrel, pumping the Lizard for lethal damage, and when Billy tried to Slay it, the Mongrel's strength showed itself, with a one mana Circular Logic causing the gentle giant to shrug and extend the hand.