Round 3: Lauren Passmore vs. Bradley Sherman 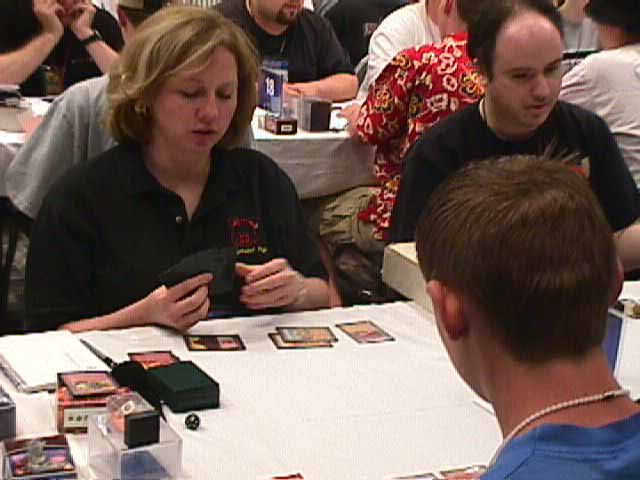 Bradley Sherman is an Ohio native, hailing from Greenville, OH. He normally plays in local tournaments and PTQs, and Columbus, OH wasn't too far of a trip for him. Lauren Passmore has played in a number of Grand Prix and Pro Tour Qualifiers; most recently, she placed in the top 8 of the Pro Tour - Chicago Qualifier the day before. Both players had well-tuned decks, with Bradley Sherman playing Angry Hermit, which piloted Aaron Forsythe onto the US Nationals team, and Lauren was playing Ponza/Wildfire.

Bradley won the die roll and chose to play first. He started off the first game with a Treetop Village, followed by a Forest and Rofellos, Llanowar Emissary. Lauren, who had led with a Rishadan Port, removed a Pillage from the game to cast a Cave-in to kill Rofellos, laid a Mountain and tapped her opponent's Forest during his upkeep. Bradley played a Karplusan Forest on the next turn, but quickly lost his Forest to Passmore's Stone Rain. Bradley Sherman then played the last land from his hand, a Gaea's Cradle, and a Bird of Paradise, but unfortunately for him, Lauren had a Seal of Fire for the bird, essentially leaving him with only two mana. Lauren then cast a Masticore and used Rishadan Port and Dust Bowl to prevent Bradley Sherman from casting an answer for the rest of the game. 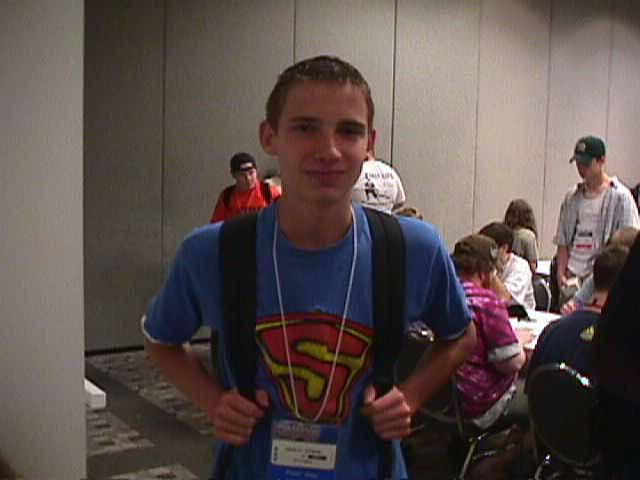 Bradley Sherman chose to play first again and his opening hand was adequate, but not exceptional against a land destruction deck, having only two lands and one mana producing creature. He decided to mulligan and was then forced to mulligan again down to five cards, leaving him with a Karplusan Forest as his only land and a Bird of Paradise as the only spell he could cast. Lauren Passmore mulliganed also, but her six card hand was a bit better. He began by playing a Karplusan and a Bird of Paradise, but Lauren had a Shock for the Bird. Bradley failed to draw land over the next few turns and he lost his only land to a Pillage on the Lauren's third turn. Following that, Lauren began casting Chimeric Idols and beating Bradley down. Near the end, Bradley was able to draw a Forest and cast another Bird of Paradise, but Lauren had a Seal of Fire on the board waiting for it and she finished him off by doing a point of damage to him with a Shivan Gorge and attacking with two Chimeric Idols.