Round 3: Lawrence Creech vs. Adrian Sullivan 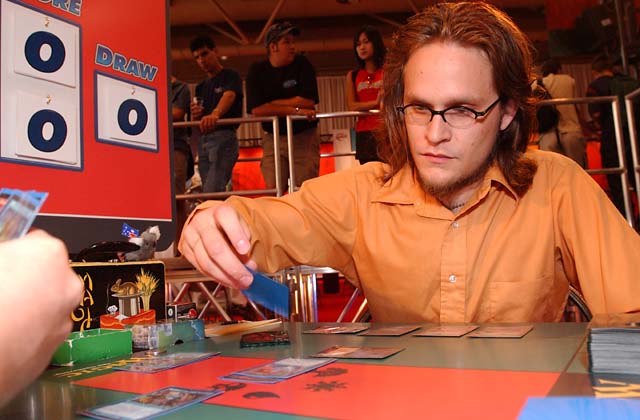 After the Olympic-esque opening ceremonies (which came after round two . . . don't ask this reporter to explain this, folks; he just got here), an unique matchup took place between Adrian Sullivan and Lawrence Creech, both of whom were playing Sullivan's innovative b-u-r deck featuring Nether Spirit, Urza's Rage, phenomenal card engines . . . and a single copy of Avatar of Fury. Brian Kowal, Jason Moungey, and Ben Seck also participated in the deck design.

Adrian is no doubt thrilled to be known by Sideboard staff as "the best player still fighting for a Top 8." He is better known by the Magic community as one of the most creative and energetic deck builders and testers in the game.

Creech is in front of the Rookie of the Year race, with a highlight in the Top 8 of PT-LA this season.

Both players kept their opening hands for game one. Creech won the flip and decided to draw first.

Early turns in the game were defined by exciting dialogue like this. Extra points for anyone who can guess who said what to whom!

With a furious battle to gain tempo and land advantage, it wasn't until a Nether Spirit went into Adrian's graveyard that either deck seemed to remember the necessity of an eventual path to victory. Then, with Adrian's Spirit nibbling away at Lawrence, the tempo cards gave way to card-drawing monsters like Accumulated Knowledge and Fact or Fiction. On turn seven, each player played out a Probe with kicker - Adrian's flushed out countermagic on both sides, while Lawrence's flushed out only lands, indicating that both sides had stocked their hands full of response cards and were ready to wait each other out.

Around that time, Lawrence found his own Nether Spirit, and soon the card drawing war became a counter war, as a turn nine Accumulated Knowledge (now at three) by Creech got targeted by Memory Lapse, which in turn got Lapsed. 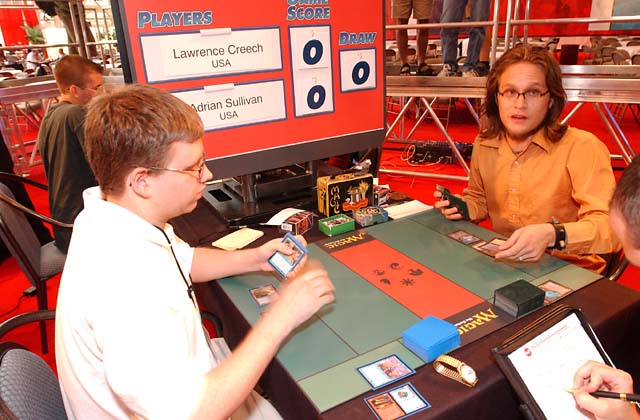 On turn twelve, at 14 life facing Adrian's 20, Creech played out the surprise of the deck: Avatar of Fury, which is meant to take advantage of players' tendency to play out at least seven lands.

The last three turns saw most of the action. After a turn 13 stack war involving Probe, Counterspell, Memory Lapse, and Fact or Fiction, Adrian played out his own Avatar of Fury while his opponent was tapped out. On turn 14, Adrian blitzed through the graveyards, realized that Lawrence had already used the deck's single-copy Misdirection (and thus our "quote quiz" above is mostly answered), and played out two Urza's Rages, without kicker, on the opposing Avatar. Lawrence quickly Iced Adrian's Avatar to save himself six damage, then played Accumulated Knowledge (now at five), which he preserved in a Counterspell run-off. Nether Spirits traded, and now Lawrence (with two creatures in the graveyard) had only one way to win: Urza's Rage.

He played one on his own turn 14, bringing Adrian down to 10. Realizing he might lose this very close match to a total of two cards, Adrian spent three consecutive Accumulated Knowledges on turn 15 (for six, seven, and eight cards, ending up with 19 in his hand by end of turn) until he got the one solution: his own single copy of Misdirection. After seeing his second Rage turned on himself and facing down a still-feisty "chicken Avatar," Lawrence conceded the game.

For game two, both players took out the two copies of Tsabo's Decree, and put in four Gainsays; but there the similarities ended. Creech took out his four Fire/Ice to bring in the anti-blue spell and Terminates, while Sullivan evenly distributed his sideouts among one copy each of Undermine, Probe, and Nether Spirit, since each had some casting cost difficulty. Sullivan did not use Terminate in this matchup.

Again, both players kept their opening hand, and Lawrence chose to go second. This time he went "aggro," playing no land on his first turn and discarding his Nether Spirit. Adrian was unable to take advantage of the situation, and found himself whittled down to six life by turn nine. Neither an Ice nor an Accumulated Knowledge could find the answers he needed, but on turn ten, he fought bravely in the following exchange:

At this point, your friendly reporter was ready to scream; but Adrian took pity on him, and his opponent, and suggested a game three. 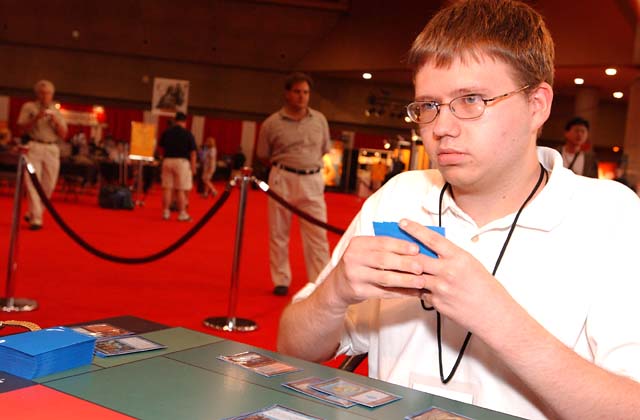 As the deck's co-designer, Adrian confirmed Lawrence's "draw first" strategy by choosing to let his opponent go first. Establishing a lucky "bonsai" pattern with his seven cards on the table, Adrian soon learned the value of superstition: he had to mulligan.

As with the first game, some early Recoils and Ices on nonbasic lands marked the first few turns. Then, with a main phase Fact or Fiction, Lawrence chose two lands and another Fact or Fiction over Probe and Gainsay, and then next turn used the second Fact or Fiction to pull out two Counterspells over a Memory Lapse, Gainsay, and Island. With plenty of cards in his hand, Lawrence could discard a Nether Spirit . . . but he didn't have one.

By turn eight, Adrian had pulled off two Fact or Fictions of his own, preferring Accumulated Knowledge (and the opportunity to put a Nether Spirit in his own graveyard) over the possibility of a Misdirection. The Spirit came out, and things looked uncertain for Lawrence until he played out his Avatar of Fury.

The Avatar attracted this little exchange:

Despite saving the Avatar there, Lawrence soon lost it to a double Rage, as in the first game. The Nether Spirit was now free to swing, and Adrian soon had his opponent down to 11. After an Undermine exchange, Lawrence only had a couple of cards in his hand, and no board position. He conceded as Adrian laid down his own Avatar.

With a gracious smile, Lawrence asked half-jokingly if there was anything this reporter could do to stop Mark Rosewater from putting him in Feature Matches, since the rookie's record is less than stellar this year when under the spotlight. We should all hope to lose as "badly" as Mr. Creech, someday . . .