Round 3: Mark LePine vs. Michelle Bush

Mark LePine and Michelle Bush had both been happily looking forward to this local Grand Prix for months. Michelle is a medical student at Harvard while LePine is undecided about his major at the University of New Hampshire - Manchester. They weren't nearly as happy when they got paired up in the third round. Michelle is fresh off her 2nd place finish at Grand Prix New Orleans and LePine has three Pro Tour Top 8s on his resume (Mainz, Rome, and Tokyo) - neither wanted to run into such a high quality opponent this early in what promises to be a long (8 round) day. Quite a crowd, including many of the players with 3 byes, gathered to watch them square off. Tight Tommy Guevin kept up a running commentary from the front row. Michelle played an archetypical red/black/blue deck while LePine ran a very aggressively 2-color (red/black) deck. 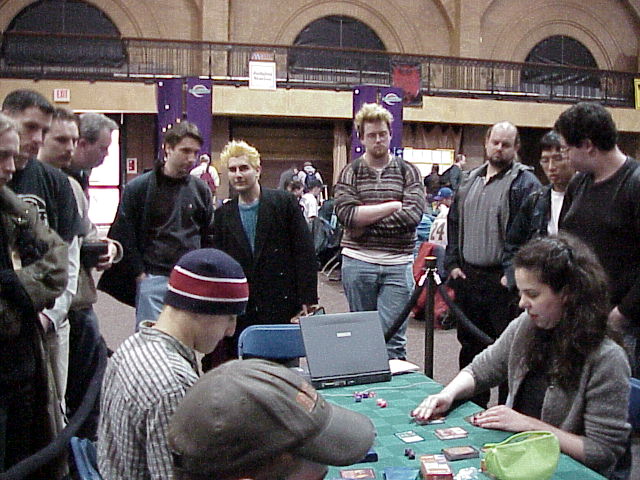 Michelle drew first blood in game 1 with her turn 3 Tower Drake. Mark answered with Caldera Kavu, but Michele removed it immediately. Mark didn't have a fourth land, but he did have a steady stream of 3-mana monsters, including Viashino Grappler and Nightscape Battlemage. Michelle got to 4 lands, but her situation was much worse because her hand was full of expensive spells: Phyrexian Reaper, Faerie Squadron, Hypnotic Cloud, and a Fact or Fiction that she didn't really have time to cast since LePine kept sending his creatures over for damage. LePine's Pouncing Kavu knocked her to 7 before her Nightscape Master went active. LePine kept feeding 2/2's to the Master, attacking with Pouncing Kavu, and dealing 1 point per turn with Thunderscape Apprentice. Michelle simply could not stabilize the board and she conceded with 8 cards in her hand.

LePine continued to trot out mediocre-but-aggressive creatures early in game 2 with Ravenous Rats, Morgue Toad, and Slingshot Goblin. Michelle once again had active Nightscape Master and this time she was in the much better position of having 17 life left when he went active. The bad news, though, was that she didn't have any Mountains and so only his blue (unsummon) ability was available to her. Michelle summoned a Faerie Squadron to start trying to get some damage in while she blocked and bounced LePine's "grey ogres." LePine ducked and weaved and snuck through for 9 total points of damage while the Master was in play. Then he finally drew a removal spell (Soul Burn) and was able to keep his monsters on the table. Mourning meant Michelle's Faerie Squadron put LePine on a very slow clock. When she tapped her mana incorrectly, LePine was able to remove a Metathran Zombie with Slingshot Goblin by shooting it, untapping, and shooting it again. She then used an Agonizing Demise to remove the Goblin. LePine was forced to play each of his creatures 2 or 3 times over the course of the game, but since Michelle's offense was nothing more than a point or two or flying damage per turn, he had time to replay everything. And LePine's creatures were just bigger than hers. Eventually, Goham Djinn and Phyrexian Bloodstock did her in.