Round 3: Masters of their Craft

you had to pick out the top five Limited players in the world, you would have many good options, but few would be better than either Anton Jonsson or Masashi Oiso. Each has multiple Top 8s in Limited Pro Tours, and is a consistent performer in any format with 40-card decks. 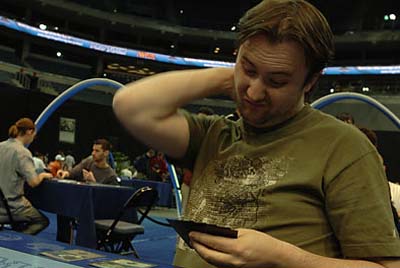 Anton flashed a familiar face during round 3.

For this draft, Masashi has a very aggressive red/white/black tempo deck which begins the beats as early as possible, and looks to continue them with efficient guys both in the air and on the ground. It punishes bad draws like few other decks in the format, and where many pros are choosing blue based decks more driven on card advantage, might be a good choice for the metagame.

Masashi won the roll and went first, playing nothing but plains for the first two turns, and a Veteran Armorer. Anton played a land then an Azorius Karoo, and was punished for his slow start by a Skyknight Legionnaire and a swing for four from Oiso.

Anton had a Terraformer on turn three, which limited Oiso's swings to air strikes, but with a Freewind Equenaut, the air force was rapidly becoming better and better. On Masashi's next swing Anton used a Mortify on the Equenaut, but still took two, going to 12. Oiso had another flyer in the form of Shrieking Gargoyle. Anton discarded a land, and frowned as he surveyed the board. He played an Aquastrand Spider, and passed.

The spider didn't jump in the way of any of Masashi's attacks that turn, and Anton went to just 8. Oiso then played a Beacon Hawk and a Tin Street Hooligan before passing. Things for Jonsson looked a little better when he played a Golgari Rotwurm, who got a +1/+1 counter from the spider, but when Oiso had a Faiths Fetters for the big wurm, that was enough to get Jonsson looking to his sideboard.

For the second game, Anton selected to play first, hoping not to get as far behind on tempo as in the game before. Masashi had the first monster though, in the form of Sell-Sword Brute, who got to swing uncontested, and was followed up with Shrieking Gargoyle. Meanwhile, Anton's first creature was a Verdant Eidolon. 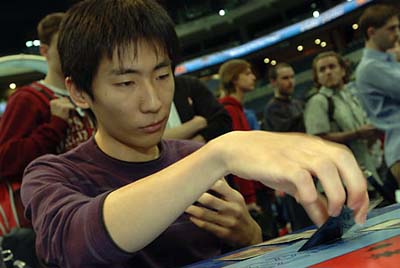 Masashi had to think, but eventually saw his opening.

Even the ground assault didn't seem to have been blocked for long, as Oiso put out an Ostiary Thrull to force Anton onto the offensive. Jonsson swung and then made Golgari Rotwurm - a great target for the Thrull. Masashi stayed back on the ground, but did continue to swing with his Gargoyle, taking Jonsson down to 14. He then played a Ghost Warden. On defence, his Thrull and Jonsson's Rotwurm didn't so much fight as tussle; the Thrull broke up any of the Rotwurm's chances of fighting.

Jonsson had a Vigean Hydropon, and then sacrificed his Eidolon in order to play a Terraformer, who got a +1/+1 counter. Masashi simply continued to swing in the air - now for 3 thanks to the Warden. He then played another Thrull.

When Anton attacked with his Terraformer, Masashi double-blocked with the fresh Thrull and Sell-Sword Brute, with the Thrull taking one for the team. Anton then played Supply for three 2/2 tokens and passed. Oiso was generous enough to supply some Pro cards to serve as Saprolings, including an Oiso card with 'I Heart Vodka' written on it. He gave a little smirk as he untapped. Oiso was not afraid of himself.

Oiso played a Skyknight Legionnaire and attacked for 5 in the air to take Anton down to 7, while staying at 16 himself. It looked like tempo was going to win out in this battle.

Anton had no plays, and passed. Masashi stopped and had a little think. The little think turned into a longer think. With a laugh he suddenly figured it out. With a quick apology he quickly played a Riot Spikes on his Legionnaire and swung for exactly lethal damage.