Round 3: Matt Vienneau vs. Ryan Fuller 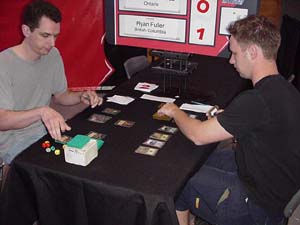 According to Ryan Fuller, this is all part of his plan. Currently sitting at 0-2, he's going to be using his record so far as a springboard to the Top 8. The former Masters Champion has been working off his ring rust with a lot of practice on Magic Online, so his winlessness has to be coming as a surprise. Fighting him for the chance to dodge the 0-3 table is two-time Grand Prix Champion Matt Vienneau. As you'd expect, the sparks started flying the moment these two characters sat down across from each other.

A few pointed remarks about Fuller's shuffling technique and they were off. Fuller started things with Basking Rootwalla. Vienneau Duressed away Circular Logic, seeing Mongrel, Looter, and another Rootwalla. He played out the Mongrel only to see it Smothered. It enabled the other Rootwalla before it died.

However, Fuller didn't have a lot to do but hit for four and then four again when Vienneau put up Rotlung Reanimator, since he was short on mana. Vienneau added Withered Wretch and finally Fuller was able to bust out Merfolk Looter. Now Vienneau was on the offensive with Rotlung and adding Cabal Archon to his squad. Fuller still needed to find a fourth land. He Looted away Deep Analysis and flashed it back, but still nothing.

Again Vienneau charged with the Rotlung, this time trading it for both Rootwallas. He dropped Cabal Coffers and Smothered the Looter, preparing to savage Fuller's graveyard with his Wretch. However, Fuller had a nearly full hand, and Vienneau's offense was waning. Aquamoeba and City of Brass showed up for Fuller, and when the zombie token and Archon hit the red-zone he ambushed them with a Basking Rootwalla, discarding a useless card to keep his Aquamoeba in play. All Vienneau had was another Wretch. They stared at each other, playing out lands, but then Fuller broke the silence with Upheaval. He replayed his island and madnessed his Rootwalla back into play.

The always-sketchy Vienneau tried to pass the turn back to Fuller with an eleven-card hand. He caught his "error" immediately, earning a chuckle from Fuller. Fuller hit and added Aquamoeba. Vienneau replayed his Wretch. Fuller pitched Wonder and swung for six, leaving Vienneau at two. All he could muster was the other Wretch. 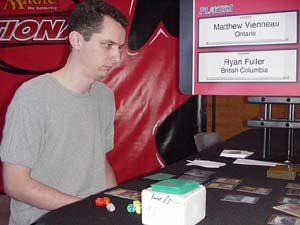 Fuller started the second game with a Careful Study pitching City of Brass and Wonder, then tried Wild Mongrel, hoping Vienneau was short on removal. Vienneau Smothered at end of turn, then untapped and dropped an Engineered Plague on Merfolk. Fuller Studied again, losing Unsummon and another City, but had no play.

Vienneau started the beats with Rotlung Reanimator, but Fuller showed him who the boss was with Phantom Centaur. Not willing to be outdone, Vienneau busted out Visara the Dreadful. Fuller had Stupefying Touch to render it merely a giant beater, and hit for five. Vienneau returned fire and then showed Ensnaring Bridge.

"Admit it, you took out the Disenchants, you have no way to win." – Matt Vienneau

Meanwhile a dejected Pete Radonjic came to see who would be joining him at the 0-3 table.

"He's got these guys here to help him with the Vancouver Stall!" – Matt Vienneau

Fuller tried to wrest himself out of Vienneau's trap. He Upheavaled, and rescued his Rootwalla from Smother with Unsummon, letting him play island and discard his Rootwalla. He played an Aquamoeba on the following turn but Vienneau had the Smother. He hit for three, and then the Engineered Plague on Lizards cleared the board.

Fuller sat on his four mana, unwilling to risk Vienneau resolving the Bridge again. Vienneau played a Rotlung Reanimator, and then a Withered Wretch. Fuller had a Stupefying Touch, but still lost his Wonder. A turn later he played out his Centaur with three mana open. Rather than risk the Bridge, Vienneau showed him a second Withered Wretch, ready to negate any potential Circular Logics.

With no way to avoid being Bridge, Fuller dropped Mongrel and Wonder, tapping all but one. Vienneau Wretched away his graveyard and then played the Bridge and Mutilated away the board. Fuller decided to scoop it and head for Game 3.

With just thirteen minutes left in the round, Fuller had to mulligan to six. He started strong with Rootwalla and Mongrel, but Vienneau had Smother ready, and Fuller could only hit for three with his 'Walla. On four land he had no play, and again on five, while Vienneau rolled with Withered Wretch and Chainer's Edict, and then Rotlung Reanimator. 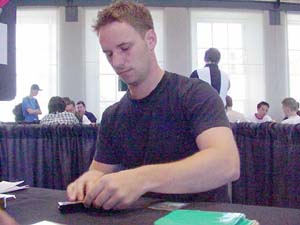 Fuller finally found some action with Merfolk Looter, but Vienneau had drawn another Smother. When he finally did hit a Phantom Centaur, Mutilate was on hand to get rid of it and leave Vienneau with tokens. Unsummon took care of one, but Fuller was at four. He needed to spend two Logics to keep a Cabal Archon off the board.

Fuller tried to cling to life with Wild Mongrel. Engineered Plague for Hounds shrunk it, as Vienneau shrugged off a Circular Logic. Of course, he forgot about the pump effect that discarding it had, so he threw away his zombie by attacking. Fuller drew a Compost and kept hope alive. Vienneau continued to play out men, but Fuller was matching pace, just barely. It helped that Vienneau had forgotten about the Chainer's Edict in his graveyard that would let him push through for the win.

Eventually Vienneau chose to Mutilate, giving Fuller three cards but leaving him with two Zombies and then Nantuko Shade. Still Fuller held on. A freshly-drawn Chainer's Edict wised Vienneau up to the contents of his graveyard, and two turns later the game was his, defeating Fuller in his now legendary style.